Are remake songs better than original? TELL US!

Image: The old and new Himmatwala
Sukanya Verma in Mumbai

Is it the shortage of brand new ideas? Or a deep-rooted adoration for the classics?

Truth is it's not just films that are returning in a new skin these days. Some of the most popular Bollywood chartbusters are making a comeback in a remixed avatar and finding favour with an audience unfamiliar with the original.

So here's a comparison between the real thing and remix.

Meanwhile, tell us which version works for you in the message board below ith your votes!

Original: Sridevi and Jeetendra shake their butt profusely against a backdrop of equally committed dancers and colourfully painted earthen pots on a kitschy set at the beach.

Remix: The Tathaiya tradition continues in a rather loyally reproduced version of the same with Ajay Devgn and Tamannaah.

Only Devgn has two left feet even as Shreya Ghosal and Amit Kumar try their best to match Lata Mangeshkar and Kishore Kumar's giddy enthusiasm for Bappi Lahiri's ornate tune.

Image: Sridevi in Chaalbaaz, Prachi Desai and Chitrangada Singh in I Me Aur Main

Original: Sridevi and Sunny Deol indulge in a delightful rain dance for this perky Laxmikant-Pyarelal ditty that rocked the charts in 1989.

Remix: John Abraham and his ladies -- Prachi Desai and Chitrangada Singh don't even come close to recreating the magic on screen or Anushka Manchanda off it.

Which version of Na jaane kahan se aayi hai do you like better? VOTE!

Original: Madhuri Dixit set a lot of hearts palpitating in her sexy yellow sari avatar and seductive heaving in the super hit Beta.

Remix: It's almost blasphemous to watch the leading cast of Rohan Sippy's Nautanki Saala mock her iconic sexiness with a dance so un-Dhak Dhak, it's anything but a tribute.

Which version of Dhak dhak karne laga do you like better? VOTE!

Original: Helen goes all out to make some serious advances at Amitabh Bachchan to Asha Bhosle's tantalising playback for Kalyanji Anandji's dishy composition.

Big B (and Kishore Kumar as his energetic voice) too gets into his element for the super catchy Khaike paan.

Remix: The remixes are ho-hum in Farhan Akhtar's glossy adaptation of the 1978 action thriller.

On one hand there's a slightly plump Kareena Kapoor turning up the heat in Sunidhi Chauhan's husky expressions.

On another, Shah Rukh Khan tries to do an AB with Benarasi paan et al.

Which versions of Yeh mera dil, Khaike paan Banareswala do you like better? VOTE!

Image: Scenes from Sholay and Karzzz

Original: Helen and Agha do an enticing gypsy-inspired gig against RD Burman's glorious rendition of his own chartbuster song in Sholay.

Remix: Himesh Reshammiya as RD. Mallika Sherawat as Helen. What could possibly be the verdict on this one?

Which version of Mehbooba do you like better? VOTE!

Original: A kurta-dhoti clad Mehmood lends gyaan on the might of money in a 1970s style party sequence to a hugely entertaining effect.

Remix: In its infectiously jazzy remix retaining Mehmood's original delivery; Abhishek Bachchan gets all stylish and suave sashaying against a wall of brightly lit bulbs.

This forms the opening credits of one of his best films, Bluffmaster.

Which version of Sabse bada rupaiya do you like better? VOTE!

Image: Scenes from Lawaris and Housefull

Remix: 'People on the floor. Come and get some more.'

And so Housefull's version employs the recurring theme of the original to device its club mix, Dhanno picturised on Akshay Kumar, Ritesh Deshmukh and Arjun Rampal making merry with Jacqueline Fernandez.

Which version of Aapka kya hoga do you like better? VOTE! 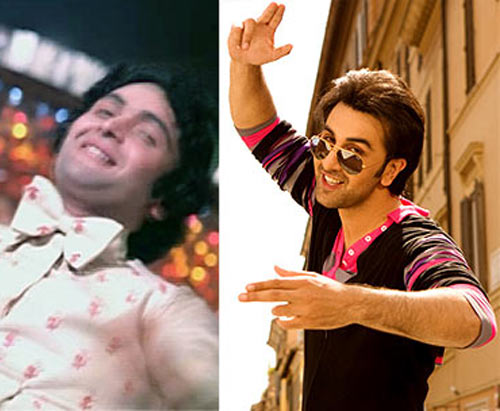 Remix: The signature trumpet returns with Kishore's son, Sumit in tow and Rishi's son, Ranbir in front of the camera to dish out a coup of a remix in Siddharth Anand's Bachna Ae Haseeno.

Which version of Bachna ae haseeno do you like better? VOTE!

Parda Parda (Apna Desh, Once Upon a Time in Mumbaai) Image: Rajesh Khanna and Mumtaz in Apna Desh, Gauhar Khan in Once Upon A Time In Mumbaai

Original: Rajesh Khanna and Mumtaz dress up like Westerners to perform the silly but enjoyable RD Burman chart topper.

Remix: Sunidhi Chauhan & Rana Mazumder never quite get the fun aspect of the original and deliver a mechanical version that finds its match in an equally tepid picturisation.

Which version of Parda parda do you like better? VOTE!

Which version of Dum maaro dum do you like better? VOTE!

Pyaar do pyaar lo (Jaanbaaz/Thank You)

Image: Rekha in Jaanbaaz, Akshay Kumar in Thank You

Remix: Mika steps in Sapna Mukherjee's shoes to dole out his typical swagger in a song that is as shabby as the film itself.

Which version of Pyar do pyar lo do you like better? VOTE!

Which version of Laila o laila do you like better? VOTE!