Akshay Kumar: I am ambitious and greedy 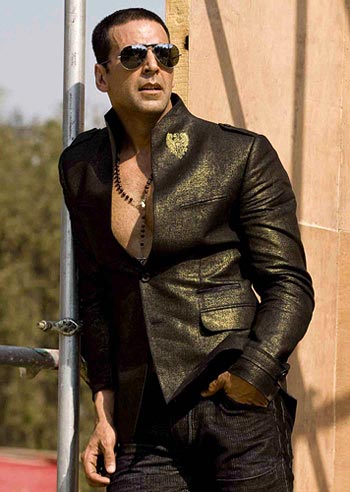 Image: Akshay Kumar says his staff has paved the way for his success.
Savera R Someshwar

Akshay Kumar is, self-admittedly, an ambitious actor. And a greedy one as well, he tells Rediff.com'sSavera R Someshwar.

Here are some life lessons from an actor who, despite facing various ups and downs in his career, refused to give up.

'I would always go back. I would fight again' 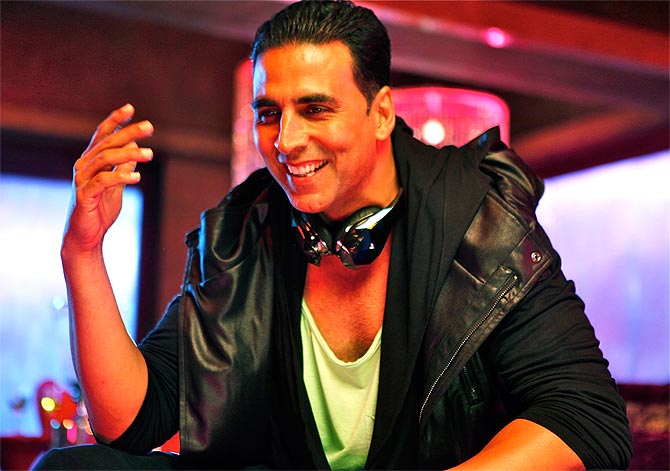 Image: Akshay Kumar says he has not learnt to give up.

Professionally, you have seen a lot of ups and downs. You had a string of flops in the 1990s. People wrote you off.

They said yeh actor nahi chalega. But you fought your way back.

Where do you get the courage, the self-confidence and the self-belief to do this?

I have always done this.

You know, I used to be in Bangkok. I did many things there. I used to do Thai boxing.

I was a street fighter as well in the sense that I used to fight for living.

Clearly, when you fight like that, you win some fights and lose some fights.

Whenever I lost, obviously I would get hurt. There would be quite a few bruises. I would lay low and apply ice.

Three to four days would pass before I could go back and fight.

But I would always go back. I would fight again.

I was always grateful and happy that I got a chance to fight again. I enjoyed being in the ring.

Winning or losing did not bother me that much; for me, being in the ring was the most important thing.

If I won, it was very good.

The same principle applies here. Even if my film does not work, I am happy I'm still getting a chance to enter the ring and fight again.

If you look at my career as an actor, it is full of highs and lows. I've seen big highs and huge drops. But that's the fun.

I have managed it so far and I like it.

'People must respect their bodies, not abuse it' 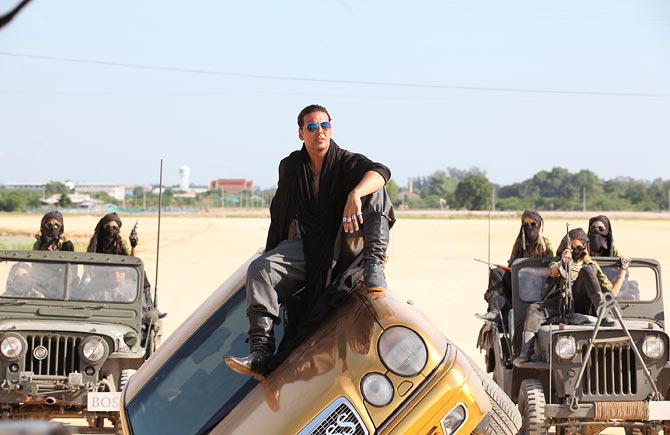 Image: There are a lot of people who have great-looking abs and great-looking bodies. But all this is achieved by taking short cuts, says Akshay Kumar.

You are a successful action hero with an incredible level of fitness. Do you see the same commitment towards fitness in today's actors?

Well, honestly, without taking names, my answer would be no.

There are a lot of people who have great-looking abs and great-looking bodies. But all this is achieved by taking short cuts. They use artificial supplements.

They don't really work hard to achieve this. You can, if you like, call this a short-term body.

Unfortunately, a lot of youngsters are absorbing this trend. They are willing to do anything to get into the eight abs and six abs club using shortcuts.

This is dangerous and makes me very unhappy.

People must respect their bodies and not abuse it. 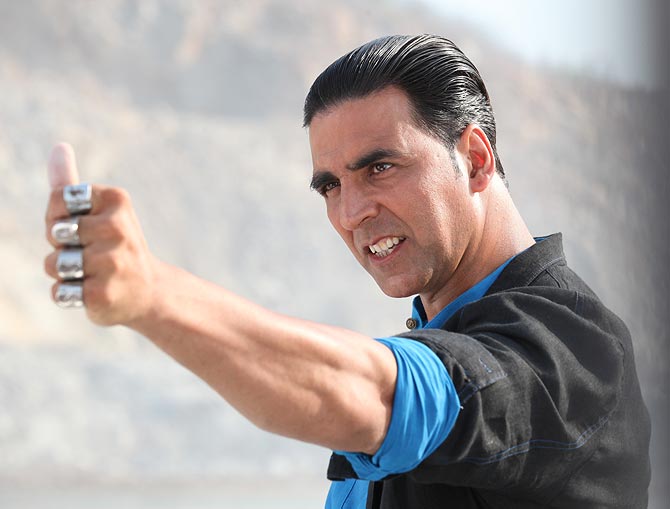 Image: Akshay Kumar in, and as, Boss.

Would you call yourself an ambitious actor?

Yes. I am an ambitious actor. There is a lot I want to achieve.

I am a greedy actor too.

I have the greed to work more and more.

I am greedy about trying something I have not done before.

I am greedy about stepping out of my comfort zone and trying different kinds of roles.

You won't believe it, but one of the things I am still very excited about is sitting in a first class seat on a plane.

When I get up in the morning, and I know I have to catch a flight that night, I work 10 times harder.

I want to tire myself so that I can enjoy that flight.

It is so childish, but I still want to travel first class by air and lie down for the night 36,000 up in the air.

'When are you ever going to get angry?' 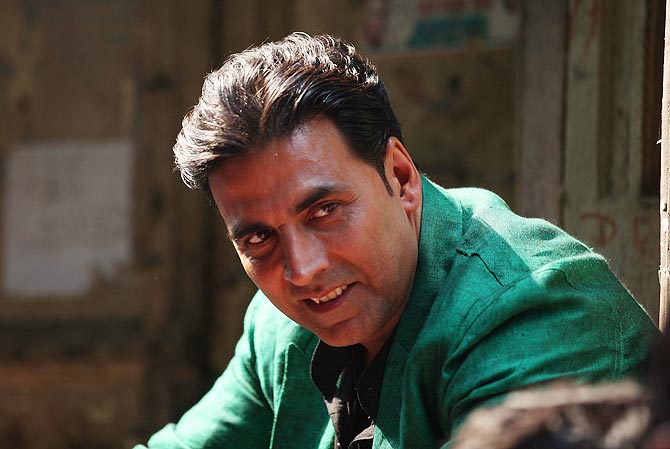 Image: Akshay Kumar takes a break while shooting for Boss.

Akshay Kumar and Rajiv Bhatia* -- how different are they?

They are the same. The only difference is in the spelling.

I don't get angry. That is what my wife always says -- 'When are you ever going to get angry?'

I have not got angry yet.

Doesn't criticism bother you? Doesn't gossip and controversy attached to your name bother you?

I've been in the film industry for so long that I have gotten used to it.

All these things don't bother me. 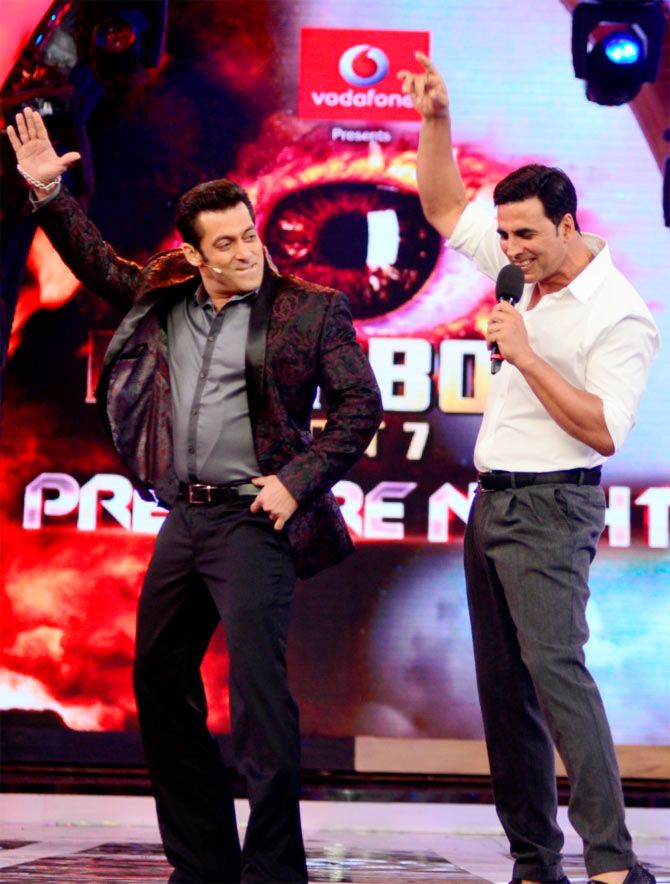 Image: Akshay Kumar makes an appearance in the inaugural episode of Bigg Boss 7 with Salman Khan.

You were on Bigg Boss recently to promote your movie, Boss.

Anita Advani (Akshay's father-in-law, Rajesh Khanna's live-in partner) was part of the show and she made certain statements about you...

Have you read my statement?

'No teaching, no preaching' 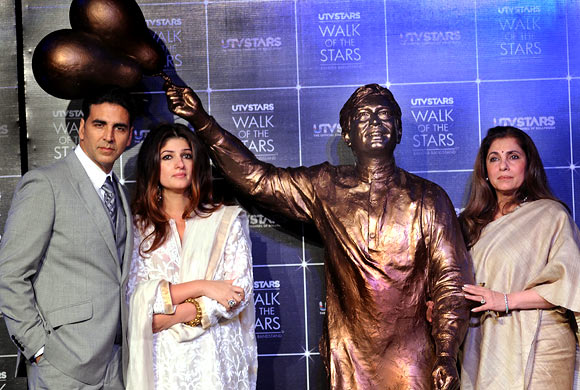 What was your relationship with your father-in-law (Rajesh Khanna) like?

What have you learnt from him?

Our conversations were never about learning anything.

He was not a professor.

We shared a father-in-law and son-in-law relationship.

There was no teaching or preaching going around.