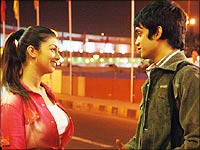 An unconventional actor always, it is appropriate that Naseer shortlists an uncommon subject for his directorial debut.

For the film's soundtrack, Naseer picks Viju Shah, the music director who gave him the chartbuster song of his career  Oye oye (Tridev).

The album, if you can call it that, features only two songs and one instrumental. It makes up for the lack of compositions by adding bonus tracks from movies like Paisa Vasool, Mumbai Matinee and pop numbers from DJ Suketu, Soumya Raoh and fusion band OM.

Kunal Ganjawala and Sunidhi Chauhan effortlessly breeze through the understated tunes of the title track. The laid-back tune ponders over the 'what ifs' of life. Though lacking in charisma, Yun hota to kya hota is not too bad.

Ek baar jaana America echoes the underlining theme of the movie. Madhushree, Javed Ali, Kirti Sagatia and Devchand Gadhvi's enthusiastic group singing alternates between a Jai Santoshi Mata bhajan and a Gujarati dandiya ditty. Another version of the same has Paresh Rawal wielding the microphone for the first time. His singing skills do not stand out in this crowded and situational I-just-wanna-go-to-America chant.

But all in all, the music happens to be incidental in Yun Hota Toh Kya Hota. Buy the album only if you are a Naseer fan, if not, wait for the movie.