A weekend with Dirty Harry

At home this weekend? Pick up these DVDs and have a blast.

Plot: A serial killer named Scorpio is on the loose, and his spree will continue until the city of San Francisco pays him a hefty sum. Now, it's up to self-styled and unrelenting inspector Harry Callahan to come to their rescue. And that he does.

Aces: Clint Eastwood coolly points his gun at the bad guy and asks, 'You've got to ask yourself one question: 'Do I feel lucky?' Well? Do ya, punk?' That's as classic as it gets. Stunningly shot, the film renders a realistic human portrayal to this edge-of-the-seat ride. Did you know that Eastwood was not the original choice for the iconic 1971 character? Frank Sinatra (!) and Paul Newman had been previously approached. Eastwood reprised Harry Callahan in subsequent films like Magnum Force, The Enforcer, Sudden Impact and Dead Pool.

Aces: With such talent on show, this has to be interesting. Swiss-born Ponti doesn't disappoint, showcasing it to the fullest. The complexity in human temperaments and the challenges of life-altering decisions are conveyed with quiet subtlety. That's one of the reasons the drama moves at an unhurried pace. Besides sensitive, reflective performances from the leading ladies, Between Strangers also scores for Zbigniew Preisner's poignant background composition and Gregory Middleton's vibrant cinematography.

tation of Shakespeare's A Comedy Of Errors. Chaos and comedy when two pairs of identical twins collide.

A Letter to Three Wives

Plot: Just before a trio of wives gets on a boat for a children's picnic, they receive a letter from a common friend saying she has eloped with one of their husbands. An engaging reaction ensues.

Aces: Adapted from the novel by John Klempner, this one's a treat for its fabulous direction, inspired performances and sharp wit. Mankiewicz shows the different equations of marriage, their spats and the insecurities of spouses with amusing conviction. This 1949 classic won two Academy awards for Best Direction and Best Screenplay. It was also nominated for Best Film but lost out to Robert Rossen's All The King's Men. 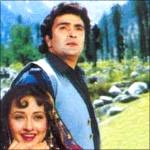 Plot: On the day of his engagement, a young Indian man has an ill-fated accident. When he wakes up, he finds himself in Pakistan-occupied Kashmir suffering from amnesia. A beautiful, kind-hearted native girl nurses him back to health and consequently falls for him. Things, however, take a drastic turn the minute his memory returns.