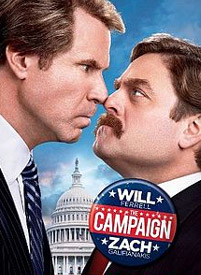 Raja Sen feels both Will Ferrell and Zach Galifianakis, lead actors of The Campaign, deserved a better script.

Comedic actors are kinda like condiments, there to bring the flavour. Some, as versatile as top-shelf mustard and Bill Murray, work unfailingly, regardless of the rest of the plate. The ketchups and Ben Stillers of the world are overpowering enough to mask lesser dishes with indiscriminate assurance, while the true gamechangers, those with their own unmistakable fieriness -- like wasabi and Sacha Baron Cohen -- either work for you completely, or not at all.

And then there are those with just one broad, distinctive schtick, those you can smell coming a mile away, like barbecue sauce. Like Will Ferrell and Zach Galifianakis. This isn't at all to say that either actor is devoid of range -- you have only to look at Ferrell in Stranger Than Fiction or Galifianakis in Bored To Death to dramatically disprove that -- but that each is known, in summer-movie circles, for a specific character type.

Ferrell does the utterly delusional megalomaniac like nobody's business, while Galifianakis plays the socially-awkward screwy nutjob fantastically well. Both have honed these bits very finely indeed, but we've seen 'em already. Over and over again. We may not have caught this particular tag-team in action, sure, but it's just bbq sauce meeting bbq sauce. Or, if you insist, maybe one of them is horseradish.

The Campaign, directed by Jay Roach of the Austin Powers series, is a film where these two hilarious men motor into autopilot and head into battle as rival politicians, fighting for a North Carolina seat. Ferrell swaggers around, Galifianakis nervously throws curveballs, and each performer predictably delivers punchlines with professional ease. There are laughs, sure, but mostly because of two actors who can eke out chortles without even trying. The gags itself, while sometimes funny, are instantly forgettable. Both deserve a script with better, and more, meat.

The unfortunate fact is that The Campaign is as timely as comedies come. America, perhaps more even than other election years, is faced currently by incompetent pretenders inching blusteringly towards the highest seat in the land. What better tool than savage satire to puncture political pomposity?

Indeed, Roach's film has the infallible duo of John Lithgow and Dan Ackroyd as puppeteering kings Motch Brothers, but that Koch Brothers dig wears thinner than a bad sketch show. A Stephen Colbert eyeroll has sharper impetus than the childish humour on display here, in this comedy that plays it so obviously safe it refuses to make even one of its moronic protagonists a Democrat. And while the leads do their bits valiantly -- as does, unexpectedly, Dylan McDermott in a deft minor turn -- the complete and utter lack of bite lets the subject down, hard.

Pity there's only that much barbecue sauce can do with undercooked meat.