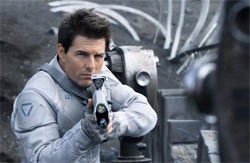 Oblivion, outside its spectacular, smooth surface, is only a middling effort that borrows liberally in tone and technique from just about every science-fiction movie there is, writes Sukanya Verma.

If Jack Reacher is an old-school actioner that came out 10 years too late, Oblivion’s Jack Harper is a post-apocalyptic survivor and saviour of (barely visible) mankind drawing inspiration from every science-fiction fantasy worth its salt in Hollywood.

Irrespective of time frame, genre or scale of hopelessness, the idea behind both the movies is to assure you Tom Cruise, the great American hero, WILL save the day. And I am all for this delusion as long as the payoff is a slightly more combative than what Joseph Kosinski’s visually arresting but vacuous follow-up to Tron: Legacy has to offer.

A lengthy monologue reveals it’s circa 2077 and how an extraterrestrial invasion, referred to as Scavs, devastated most of the planet. Harper, a fighter-mechanic along with his colleague/companion Victoria (Andrea Riseborough) -- an ‘effective team’ -- is stationed on ‘whatever’s left of’ Earth to collect resources and direct drone machines to destroy any alien specimen on sight.

‘We're the mop-up crew,’ he explains.

They have two weeks to go before they’re sent back to Titan, a sort of second home for mankind. Unlike the cold Victoria, who is happy interacting with her commando Sally over a futuristic version of a Skype-like software, Harper is troubled by recurring visions.

He holds on to the memories of the past, building a secret shrine of old books (Lays of Ancient Rome, Tale of Two Cities), records (Duran Duran, Floyd) and collectibles (a stuffed Gorilla), in a no-satellite zone, slipping into his favourite New York cap, flannel shirt, playing a game of basketball as a reminder of his one-time human existence.

The grey mood is unmistakable in its dull lighting, barren landscape or an overwhelming sense of loneliness. There’s something almost disturbing about the Zen-inspired calm and ambiance within the soaring, glass-paned sky tower he and Victoria share simply by the virtue of perfection.

Be it the sleek white and matt-finish aluminium architecture of their unusually minimalistic abode or the clean, futuristic transport design -- the bike, the aircrafts, the sleeping cells, the drone machines, the gadgets, the gizmos are everything stuff concept art museums are made of. Oblivion, in the tradition of Tron rolls out like a two-hour long commercial for retina display.

When not flaunting its high-definition technology boosted by Anthony Gonzalez and Joseph Trapanese’s electronic score (it’s sublime but doesn’t have the magnetism of Daft Punk or Tangerine Dream), Oblivion gets in touch with its organic side over dreamily-captured aerial shots of barren lands, snow-capped mountains, majestic ravines and gorgeous streams.

Ruins are hardly a thing of beauty but Oscar-winning cinematographer Claudio Miranda (Life of Pi) blends CGI trickery here as well to showcase striking scenes of a submerged New York and Washington, almost like a hat-tip to Planet of the Apes.

Harper and Victoria’s monotonous lifestyle is disrupted after Harper rescues a woman named Julia (Olga Kurylenko) with connections to his past. A hostile encounter with the head of an underground resistance (Morgan Freeman) suggests sensational disclosures ahead. But, barring a few surprises, Oblivion doesn’t take it full steam.

It pitches curious ideas, like a budding sense of romantic rivalry between Victoria and Julia only to call it off mid-way. Except Harper, nobody else gets a chance to flower individually; their constant purpose is to act as pieces of a puzzle only Harper has the authority to put together.

Tom Cruise plays this serious-faced, one-note messiah with the same seasoned (read BORING) assurance he always has. While Riseborough elevates her underdeveloped character of an aloof, cautious associate to a partner who feels betrayed rather perceptively, the beautiful Kurylenko is confined as the proverbial damsel in distress.

But it’s a real shame to see a powerhouse like Morgan Freeman squandered away as a fancily-dressed Ninja with little to say and nothing to do.

In the end, Kosinski’s Oblivion, outside its spectacular, smooth surface, is only a middling effort that borrows liberally in tone and technique from just about every science-fiction movie -- Star Wars, Artificial Intelligence, Minority Report, Tron: Legacy or, what the heck, even Wall-E, and STILL misses the point. 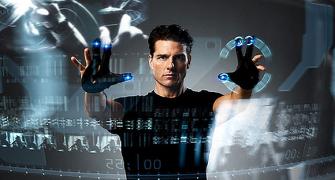 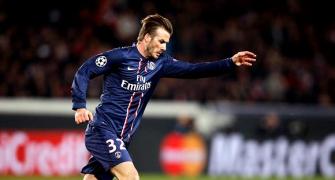 Interview: Beckham not giving up on playing for England yet 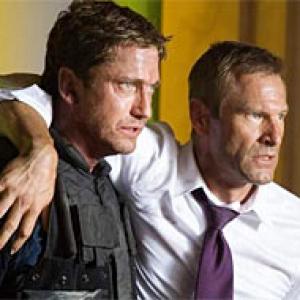 Review: Olympus Has Fallen is ambitious but banal