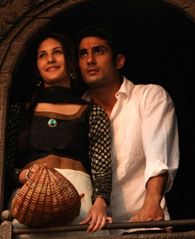 Issaq is a shoddily written film with a cringeworthy performance from its leading man Prateik Babbar, writes Raja Sen.

Back when he was making his Othello adaptation, Vishal Bhardwaj almost titled the film Issaq -- a take on the Hindi heartland's pronunciation of Ishq. Leading man Ajay Devgan's love for that title aside, better sense prevailed and Bhardwaj went ahead with the alliteratively correct Omkara.

This week a film called Issaq releases across the country, and it's yet another Shakespeare adaptation: Romeo And Juliet, this time, set in Benaras.

It is a preposterously bad film, a shoddy wannabe that -- despite taking scraps from the table of Shakespearewallah Bhardwaj -- lacks ambition, soul, clarity. In case you were wondering, that title is pronounced iss-suck. And the film takes that last syllable far, far too seriously. The first time I saw Prateik Babbar in Jaane Tu Ya Jaane Na I was significantly intrigued. The second time I saw him, this time as a leading man, I was impressed.

Without holding his Dum Maaro Dum squeakiness against him, I thought he'd be a solid choice to play that most overplayed of romantics. Also, I'd found many a merit in director Manish Tiwary's first film, Dil Dosti Etc. Guided by the bard's most universally evocative (and most frequently evoked) text, I thought something interesting might be on the cards.

It isn't. This is a monstrosity, a shoddily put-together collection of weakly written scenes that don't even attempt to flow from one scene to the other. The editors may be the chief culprits here, but the leading man must be chastised first.

Babbar is an enormous failure and an overblown embarrassment. His performance, lacking in both consistency and sincerity, is affected also by a simian gracelessness: his line-readings are atrocious, and every other dialogue is delivered in a different kind of pitch.

It is one of those cringeworthy producer's-son kind of performances, but I hear the Ramaiyya Vastavaiyya bloke

was less painful. (I don't doubt it. What Babbar achieves here is a quite spectacular trainwreck; Tushhhar Kapoor and Jacckkie Bhagnani, however they spell their names, should hit theaters immediately for a good laugh.)

Perhaps in a misplaced tribute/slur, Tiwary names his battling families Kashyap and Mishra: it feels as if independent filmmaking buddies Anurag and Sudhir had a truly bloody falling out.

The two families are out and baying for each other's blood, but in the middle of their gangland strife is shoehorned a strange "Madrasi" Naxalite who gets his men to wear his face on masks and sculpt likenesses of him in the sand. It is all most exasperatingly harebrained and amateurish.

But then doesn't that particular play work even when performed by schoolboys in drag dangling over cardboard balconies? The whole point of that love-struck romeo and his street-side serenade is that you know all the inevitable, gristly facts but hey... whatcha gonna do about it?

Except here you just wait for the slicing and dicing to happen sooner in a film that feels four hours long.

Amyra Dastur, the debutant who plays Juliet isn't half-bad: she's pretty and bright-eyed and altogether like a tolerable version of Prachi Desai, but then maybe she only seems decent here in comparison to the blundering Babbar.

There's a sweet scene with her getting her nose pierced for love, but that's about it. Vineet Kumar (he of that Bombay Talkies murabba story) eats a lot and is made to act in a totally different sur than others around him, as if he was borrowed from a Kashyap film, his style left unchanged.

Similarly Sudhir Pandey acts like he was in a Priyadarshan movie (complete with boing-boing background score 'hilarity') and Ravi Kissen hams it up as if Prakash Jha's life depended on it. Rajeshwari Sachdev is the only one who actually does well in the context of the movie, though an argument may perhaps also be made for the every-grizzly Makarand Deshpande who plays a ganja-loving swami (the obvious apothecary).

Issaq is, then, an insultingly bad film.

At one point the Naxalite nutjob asks his troops what they want: a car, a bungalow, a lot of cash. "Katrina Kaif," they yell back in fevered unison. I disagree. After the way Babbar manages to smile beatifically through this mess, forget car or Kaif, I'll have whatever he's having. 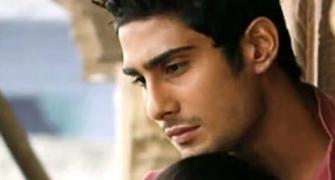 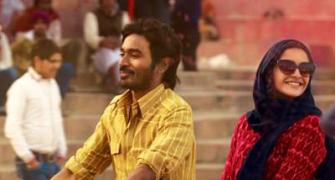 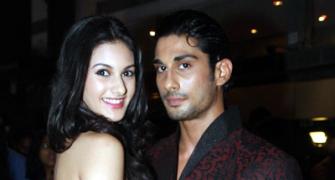 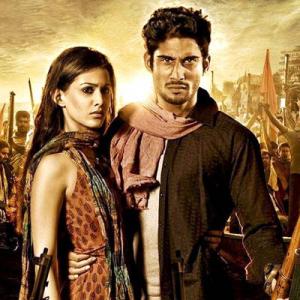 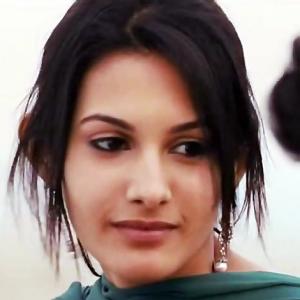