News
Business
Movies
Sports
Cricket
Get Ahead
Money Tips
Shopping
Sign in  |  Create a Rediffmail account
Rediff.com  » Movies » Too much of Rishi Kapoor in Do Dooni Char

Too much of Rishi Kapoor in Do Dooni Char 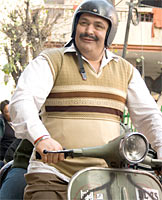 The common man as the protagonist. His intrinsic moral values. His ability to remain upright even at the risk of facing dire consequences. But then ideals aren't always crafted out of plastic or glass. In the post liberalisation era ideals are more like rubber which can be stretched or twisted to suit the need of the hour. But even elasticity is not infinite. Once a person bends the rules, how far can he go? Will the lure of the moolah succeed in ruling his life, destroying three decades of a glorious career?

Santosh Duggal (Rishi Kapoor) is the head of the Duggal family, a professor of mathematics and family man to the core. His wife Kusum Duggal (Neetu Singh) has given up her career as a librarian to please her husband. Their daughter Payal (Aditi Vasudev) is a typical college student who lusts after every snazzy gizmo and gadget which enters the market. Their son Sandeep (Archit Krishna) believes life is all about money and more money.

Rishi Kapoor has been plodding away or rather chugging along on his two-wheeler making the arduous journey from his workplace to his coaching classes in the hope that his kids will one day possess the much-coveted 'MBA' degree. But then the best of plans often tend to go haywire...Priorities are redefined and the need for a four-wheeler takes precedence over all else.

Set in a one-bedroom flat in Delhi, Do Dooni Char is successfully recreates the middle-class ethos. The Duggals are a 'normal' family. They fight over bathroom rights and hot water. Having non-vegetarian food in the middle of the week is the high point of their lives. And they constantly fantasise about the next luxury durable which might enter their lives (ipod, home theatre or car).

Debut director Habib Faizal manages to draw you effortlessly into 'the Duggal world'. But the script lacks enough meat to keep you hooked. The simple story gets stretched endlessly in a mindless fashion. One pretty much knows how the film is going to end. But especially in the second half of the film the journey with the Duggals gets monotonous and inane.

Almost the entire film has been shot on location and it goes a long way in giving Do Dooni Char the 'real' edge. The cramped flats, the verandahs (from where baskets are lowered to buy veggies) and the pan-stained

corridors of the coaching classes. 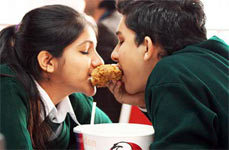 The kids or teenagers have delivered endearing performances. Aditi Vasudev is a natural. She possesses a certain feminine charm despite her cropped hair and sporty wardrobe and brings raw energy on the screen. Archit Krishna uses his facial expressions to convey fear, disgust, boredom or plain envy. A daunting task to work with veteran Rishi Kapoor in your first film. Yet these two and their clumsy attempts left me with a smile on my face.

Rishi Kapoor even in the second lease of his career has always played the suave rich gentleman (Hum Tum, Pyaar Mein Twist, Kuch Khatti Kuch Meethi). Or the upper-class producer in Luck By Chance! Here he's a middle-class male chauvinist. Does he pull it off? Oh yes. With minimal makeup, a wardrobe which does nothing to disguise his pot belly, and the well-worn helmet (the hallmark of a middle-class life) Rishi Kapoor takes up a new avatar and emerges triumphant.

On the flip side, there is just a little too much of Rishi Kapoor. Ostensibly Do Dooni Char is about the Duggal family. But the director focuses single-mindedly on Rishi Kapoor. The actor fills up the frame and leaves little room for his co-actors. But surely this is not something for which we can blame him? After all it is the director who needs to strike a balance.

It is a pity Neetu Singh chose this film as her comeback vehicle. The director relegates her to the background. She's just a peg on which Rishi Kapoor hangs his coat. Or maybe that's the director's vision of a model housewife. Sad because Neetu Singh is hugely talented and she deserved more.

The film is a must see for all those who enjoy dramas about middle-class morality. And of course Rishi Kapoor fans who are spread across generations. The rest may give this a miss...