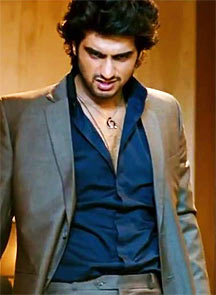 Performances -- especially of Rishi and Arjun Kapoor -- are the best thing about Aurangzeb, writes Sukanya Verma.

Aurangzeb is primarily about inheritance of character from parent to child. And the opening underlines this theme with a quote from Roman poet Horace, ‘Deep in the cavern of the infant’s breast; the father’s nature lurks, and lives anew.’

What lends its sentimentality a crooked twist is how its premise is relentlessly influenced by the cutthroat philosophy of Mughal Emperor Aurangzeb. Director Atul Sabharwal tackles the conflicting interests of conscience and conditioning with his robustly executed first film for Yash Raj.

Against the relevant backdrop of land-grabbing in Gurgaon and its deep-rooted network within corporate sectors, political parties and corrupt law and order, Sabharwal weaves an old-fashioned yarn about family -- both close-knit and estranged.

On one hand there’s a family of cops -- Ravikant (Rishi Kapoor), his nephew Arya (Prithviraj Sukumaran) and son Dev (Sikander Kher). The stern, resentful Arya models himself along the lines of the supremely assertive Ravikant as opposed to his long disgraced, defeated father (Anupam Kher).

Meanwhile, Yashwardhan (Jackie Shroff) is a successful tycoon running illegal industries, masked under the impression of his authorised businesses, assisted by the sharp Neena (Amrita Singh). He has given up on making sense of his brash son, Ajay (Arjun Kapoor), the proverbial cad whiling away his time partying with/beating up his annoyingly compliant girlfriend, Ritu (Sasheh Agha).

Light-eyed Agha, no matter how much (and frequently) she exposes, cannot distract the viewer from her serious lack of talent and feeble screen presence. Her so-called intense scenes with Kapoor are plain comical and completely dampen the screenplay. She fares better in the recording studio though with her spunky rendition of Barbaadiyan.

But this is only maybe five minutes of Aurangzeb, which starts off a tad synthetic with dialogues sounding like quotation books instead of conversation.

The real discord begins after Arya discovers Ajay’s lookalike, Vishal (Kapoor) and plants him in Ajay’s place to collect evidence against Yashwardhan in the backdrop of Gurgaon’s glossy landscapes (with surreal shots of its bokeh-lit traffic by N Karthik Ganesh).

There’s a dramatic twist here ( which I am obviously not going to reveal) that ensures Aurangzeb doesn’t draw too many comparisons from the likes of The Departed, The Devil’s Double or even Don. (Though there is moment that squeals Skyfall whereas the background score is reminiscent of The Dark Knight Rises.)

Deeply derivative of the traditional Hindi film narrative where blood-ties gain precedence over individual turbulence, Aurangzeb works even in its inept form. Because, one, Sabharwal constructs a compelling, intricate conspiracy of deceit and motive around predominantly grey characters, where chances are anyone can turn a volte face, for better or worse.

And because Aurangzeb’s momentum is steady and swift, the loopholes are skilfully minimised even if only temporarily. So, sure, you do wonder about the loosely established relationships, convenient set-ups and undisclosed footage of significant reactions, but much later.

Interestingly, Aurangzeb doesn’t demonstrate any depth to examine the impact of role-playing, and change in circumstances on Arjun Kapoor’s psyche but both -- Prithviraj (by way of voiceover that offers a constant peek into his thoughts) and Rishi Kapoor (his candid conversation with Deepti Naval showing his innermost anxieties to his frighteningly supportive partner) -- emerge as the more fleshed-out characters of this stylish drama.

This brings us to the second and most stealing aspect of Aurangzeb -- its casting (Shanoo Sharma). Prithviraj Sukumaran’s clean-cut persona stands out in a role that demands subtle cynicism, restrained force, suppressed emotionality and dry humour.

Rishi Kapoor is at the top of his game and inspires awe through the stunning curve he draws within the story. To rave any more could lead to revelations that are best enjoyed on one’s own.

The other Kapoor, Arjun shows remarkable poise and volume in his second film and first double role in the company of stalwarts. Though it could have been a far better written part, especially Ajay, he consciously maintains a distinction between the twain.

It's also great to see Jackie Shroff render the proceedings his characteristic charisma, warmth and grit in a somewhat neglected role.

None of the senior girls -- Amrita Singh, Deepti Naval and Tanvi Azmi -- are moulded in pure convention and make a statement with their fiercely kohl-ed eyes and sturdy point of views. Sadly, in the case of their junior colleagues, Agha doesn’t have the potential while Swara Bhaskar isn’t given enough scope to bite.

Whether all kids inherit their parents’ moral temperament I do not know but where Bollywood is concerned, its conditioning on filmmakers is undeniable. And going by what the inspired but engaging Aurangzeb has to offer, it’s not such a bad thing. 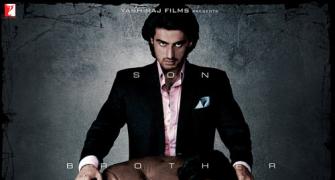 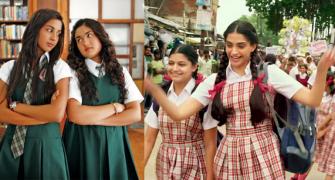 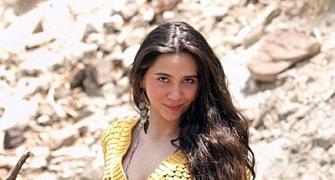 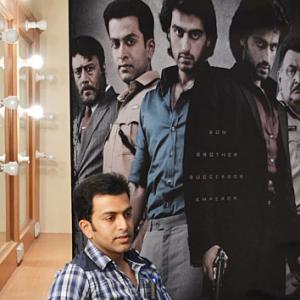 The happening videos this week!