Many a great trilogy have been hampered by weak, disjointed third instalments: The Godfather, Back to the Future and Pirates of the Caribbean: At World's End immediately come to mind. The same proves true for Mummy III: Tomb of the Dragon Emperor. But, the thing is, the Mummy, despite its commercial success, was never a good series to begin with.

Mummy III is an unsatisfying extension of a trite, big budget Hollywood Frankenstein, a monster that now seems to have life of its own. Fans of the first two will likely enjoy it. But if you found the first two instalments obnoxious, beware. Tomb of the Dragon Emperor has all the imperfections of previous efforts, but with an even less interesting and feasible storyline.

The film fails to engross, even as core characters teeter on the brink of death, because the end result and the means it takes to get there are so utterly transparent. Rife with self-sacrifice from the good guys and replete with indiscriminate slaughter from the baddies, even for a summer blockbuster, it sinks under the weight of its own clichés.

At the centre of the story is an entirely unbelievable age progression: Rick O'Connell (Brendan Fraser) is no longer the young, dashing explorer; he's settled down and married to Evelyn (Maria Bello), and their son Alex (Luke Ford) is now 18 years old and all grown up. The couple has retired from the high stakes hijinks and find themselves bored. They desperately want to leave their life of English estates and library archives, and secretly yearn for the old days of action and adventure, though they dare not admit it to one another or even to themselves.

Their son, Alex, supposedly off at college, has too been bitten by the adventure bug, and sets off in China to carry on his father's legacy. The precocious youngster engineers the discovery of Han's (Jet Li) tomb, the infamous Chinese Dragon Emperor, who ruled the land with an iron fist over two millennia ago. It's the most important archaeological finding since the discovery of King Tut's tomb. Of course, Alex does this unbeknownst to his parents, who give him a stern lecturing when they found out what exactly Junior has been up to. 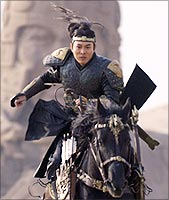 It turns out that Alex isn't the only one interested in Han's tomb. Others want it, but for far less innocuous reasons than for vainglory and posterity's sake.

A group of Chinese militants seek The Dragon Emperor's return, and they covet the order and military might a resurrected and immortal Han would bring. A chain of events is set in motion that sees the Emperor come back to life. Should he reach Shangri La and achieve his immortality, the whole world will fall under his tyrannical reign, at the mercy of his indestructible terracota army.

It turns out, however, that while the Emperor was alive, he angered a lot of people off, mainly by ruthlessly cutting down anyone he perceived as an enemy. Two such eternal enemies are Lin (Isabella Leong) and her sorceress mother (Michelle Yeoh). Lin also plays young Alex's love interest.

There are several plot twists, turns and betrayals, but they seem hastily inserted, and in hindsight, don't even make much sense. These are the hallmarks of recent Stephen Sommers' films (Deep Rising, Van Helsing), and though he's relinquished directorial duties to Rob Cohen, his fingerprints as a producer are everywhere. And Cohen's input is nothing to write home about either; at times, the film seems like a 1940's version of The Fast And The Furious.

The frequent battle scenes are, of course, full of outrageous odds and pithy one-liners. Really, the special effects are a saving grace. But how many fireballs, hideous beasts and half-baked Kung Fu moves can a single movie handle? We get all of these in spades, to the point of monotony.

Frankly, Fraser is at his best in the beginning, when he's bored and unemployed. He's aloof, sarcastic and gives off the perfect 'been there, done that' vibe. But his humour seems ill-timed during the continuous life and death scenarios that follow. Furthermore, he's unbelievable as a battle-wearied father, and this is a step down from his first two efforts under the Mummy banner. In fact, despite Fraser's 39 years, the role of Alex would have been infinitely more suitable. Fraser and Ford seem more like college buddies than father and son, with their constant oneupsmanship and good-natured ribbing. The whole "You never loved me as a child!" and "Sorry, I was saving the world!" arguments between father and son are just laughable.

Only Bello is able to sell the family-on-the-rocks angle, and she's actually quite good throughout, one of the film's few redeeming points. Certainly, she's an improvement over Rachel Weisz, who spurned a third attempt at the character.

Leong is fine as Lin, but she's given limited scope to perform. Her character follows a predictable arc, from immortal defender of humanity to just plain human. The love story is comically cliched and underdeveloped, with only Lin's immortality preventing a fruitful relationship with Alex. When he angrily tells her, "It will never work. You guard tombs. I raid them," it's hard to stifle a laugh.

Yeoh turns in a fine performance as Lin's sorceress mother, and manages to inject some sorely needed 'honour' and 'justice' into the storyline.

Evelyn's brother Jonathon (John Hanna) is along for the ride, though strictly as comedic relief.

Jet Li serves no discernable purpose, as Han is primarily rendered by CGI graphics. He does, at least, manage a suitably ferocious countenance. And, of course, he cameos for a few half-hearted hand-to-hand combat scenes. But, really, how much Kung Fu can you expect from Brendan Fraser?

In addition, there are yetis (yes, yetis), shape-shifting creatures and armies of the undead. But it's too much, too often, with too little reason. The second half of the film is an extended, excruciating, underwhelming climax, with the result never really in doubt.

The settings are impressive, from the rugged Chinese countryside to the snow-capped peaks of the Himalayas. But it's Shanghai in the 1940's that is most charming and best portrayed. Sadly, Shanghai is given precious little screen time, and much of it is devoted to a ridiculous, protracted chase scene. At least, the Chinese firecrackers provide a feast for the eyes.

So what are we left with? A blow 'em up action adventure complete with requisite familial troubles and a slipshod love story. In a way, it does remind of Indiana Jones, but Fraser is clearly not Harrison Ford and Cohen is clearly not Lucas. With a full trilogy plus a spin-off (The Scorpion King), this cow has been milked dry. But additional films are already in the works, and it seems the real curse of the Mummy series may be bi-annual mediocre releases.

If you're looking to while away two hours, by all means, go ahead. To be fair, there are some moments of genuine humour and riveting action, they just prove few and far, far between. It's just sad that the visual treats come at the expense of a coherent and compelling plot.