Bangalore playwright Mahesh Dattani's debut movie, Mango Souffle, is an adaptation of his play, On A Muggy Night In Mumbai. It t 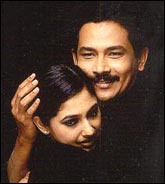 hrows up the issue of sexual identity, which is very much buried under the carpet of Indian morality.

Kamlesh (Ankur Vikal) is a promising fashion designer who is terribly concerned about the fact that his sister Kiran (Rinke Khanna) is unable to find a suitable boy to wed. The film opens with a brief scene where Kiran is turned down yet again and Kamlesh is shown grooming her to 'look' attractive.

But we are never quite sure if the rejection is because of Kiran's lack of appeal or because her brother is a homosexual. How do their parents react to Kamlesh's sexual choice? What role do they play in their children's lives? We never find out because they swiftly disappear from the picture after the opening scene.

The action then shifts to Kamlesh's plush farmhouse where he has invited his friends for a confession. There is his ex-lover Sharad (Faredoon 'Dodo' Bhujwala) who is miffed about Kamlesh's recent relationship with another man; Deepali (Heeba Shah), who is worried about her friend's restlessness; Ranjit (Denzil Smith), who speaks with his nose in the air and has an unfavourable opinion about everything, and Bunny (Sanjit Bedi), a television actor who is very conscious of his public image.

Kamlesh's grand confession is that he has broken off with his lover. The reason he has called his friends over is because he plans to resettle in Canada. They cannot comprehend why he should make such a radical decision. But Kamlesh insists they promise not to reveal anything about his relationship to anyone.

Just then, Kiran arrives unannounced and catches them by surprise. She is introduced to Kamlesh's friends. It is intriguing she has never met her brother's ex-lover Sharad although she seems very attached her sibling. Nor is she familiar with his other friends.

Close on her heels is her new fiancé Ed (Atul Kulkarni) whose arrival throws the situation out of everyone's control as a few skeletons tumble out of the closet.

makes some harsh observations about the manner in which most urban Indians approach the subject of sexuality. There is a brilliant scene in which Sharad mocks at the conventional definition of 'manliness.' The openness with which some of the characters discuss sexual relationships and choices is refreshing.

Yet the film does not strike a deep chord because there are too many unanswered questions. Apart from Kamlesh and Kiran, none of the characters are properly etched. Where do these people come from? With absolutely no reference to their background or the actual social milieu in which they live, the film looks more like a teleplay with very little physical action and hardly any progression in terms of emotional evolution.

In the event, one cannot really blame the actors for not being able to connect with their audience. Do 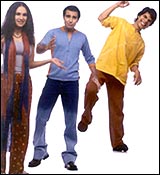 do Bhujwala has the best lines in the film and is, hence, effective. But Heeba Shah has very little to do or say. Ankur Vikal is not able to bring out Kamlesh's frustration and desperation quite as poignantly as he should have. Atul Kulkarni too seems off-colour because his is the most ambiguous character in the film. You never quite figure out anything about his past or his motivations, leaving you with very little sympathy for the man.

Rinke Khanna turns up a mature performance as the timid Kiran. She externalises her character's concern and confusion with great feeling.

Finally, while Dattani does have a pertinent point to make, his story does not have enough meat to justify a full-length feature film. In fact, Mango Souffle as a single episode of a television drama series would have been far more compelling than it is in its present form.