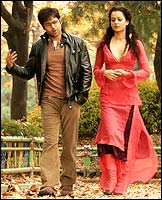 For starters, the story is said to draw inspiration from the real life romance between underworld don Abu Salem and Bollywood starlet Monica Bedi. That probably explains the film's rather awkward title. 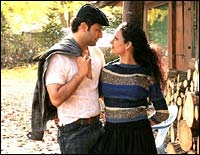 Abhijeet coos the lyrics in the next track, Lamha lamha. Although it starts off nicely, the excessive saccharine in its tune proves to be its undoing. The romantic irritant features a second time as a duet with Sunidhi Chauhan. Nothing is changed. The overbearing nature of the track still persists.