News
Business
Movies
Sports
Cricket
Get Ahead
Money Tips
Shopping
Sign in  |  Create a Rediffmail account
Rediff.com  » Movies » This one ain't Fantastic either

This one ain't Fantastic either

It's what every film dreams of; getting under the skin of its protagonist to the extent that it is an extension of the character.

Like Mr Fantastic, it stretches way beyond its appropriate length; like Sue Storm, its plot frequently turns invisible; like the Human Torch, it gets you bored with a slow simmer; like the Thing, it speaks in syllables fit for fools.

The sequel is better than the original, but that isn't much of a benchmark. The first film was a badly handled origin story, and this one is a bland comic film. Jack Kirby and Stan Lee's bestselling creation, Marvel's first family -- coming before Spidey or the X-Men --  deserves way better.

There are times in comics when substandard writers and artists are given top characters to deal with. It isn't out of choice, and many a time have all our favourite superbeings fallen into grubbier hands. There's nothing wrong per se with the final product they churn out: the obligatory bits are all in place, the fight scenes, the maniacal villains, the typical points of conflict. There's really nothing they're leaving out. Except, it doesn't quite come together, and we're left wishing for a better colouring or plotting.

It's the same with the FF series. The first film made money, and so will the second. This is why director Tim Story, who isn't doing a single memorable or spectacular thing with the franchise, can stay comfortably at the helm of it all. And we can watch much loved superheroes going through the motions, while we get bored. Sigh.

It starts off with some promise. The thing with the FF is that they're not masked vigilantes. These guys are open celebrities, good New York guys the public knows about, and adores. So as they stand in line at an airport, Reed Richards (Ioan Gruffudd) gripes to bride-to-be Sue Storm (Jessica Alba) about the lack of proportion in the world, finding their upcoming nuptials dominating the media instead of a strange power-shortage the world is facing -- why Reed, the smartest man on the planet, would read a tabloid is beyond me, but hey. 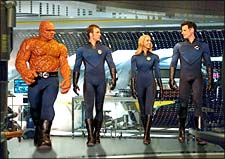 The media's lack of perspective resonates loud and clear, for sure. It might have seemed far-fetched last year, but now the way the world's media goes gaga over a blasted wedding, ignoring matters of global import, makes us go 'ah yes.' We, in India, were there and ridiculous-er, not so long ago, and the FF face the same mad paparazzi scrutiny. Realistically, they don't mind it as much. Johnny Storm, the Human Torch (Chris Evans) plays it up for the cameras, the showboated doing enough to bring them new costumes, NASCAR-style superhero outfits laden with corporate logos.

The conflicts are potentially delicious. Altruism versus sponsorship? Fame versus anonymity?

The film, of course, shovels past these with cruel ease. The outfits are brought out, and inexplicably dismissed for the rest of the film. The wedding, memorable only because Stan Lee can't make his way into the venue, breaks up, and the big, murky question of media and superhero celebrity is depressingly replaced by the 'clobberin' time' simplicity of Ben Grimm, (Michael Chilkis) better known as The Thing.

The reason a couple as perfect as the stretchy Mr Fantastic and The Invisible Woman doesn't get past the altar isn't because of costume insecurity. There is a strange meteoric phenomenon, orbiting the earth, cutting off its power and changing world climate whimsically. This flying dude, as a pretty shaken up Human Torch discovers, is the Silver Surfer.

The Surfer (played here by Doug Jones) is one of Marvel's trippiest characters, a young astronomer called Norin Radd from the planet Zenn-La. When his homeworld was threatened with consumption by an evil, God-like entity called Galactus, Radd took on the wild silvery appearance and became Galactus' herald, searching for new worlds for his master to devour -- to keep Zenn-La alive. 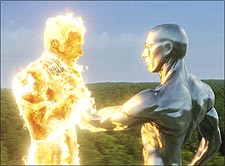 Not that the film explains any of that, of course. Here, amid a conventional, Hollywoody disaster movie background, the FF fool around, coming across more reluctant than heroic. Doctor Doom (Julian McMahon) gets his face back, which seems like a bit of a waste -- like mostly everything else in the movie. There are effects, but they seem okay. Setpieces, but nothing memorable. And one-liners abound, but they're pretty darned dull. The cast has gotten better since the first outing, though Johnny Storm really ought to be more of a stud.

A ho-hum film, then. You won't complain if the popcorn tastes okay, but you'd sure as hell not recommend it to a friend. And don't even start up with a comic lover.

And I just can't get over the Fantasticar being a Dodge.

What Fantastic Four: Rise Of The Silver Surfer does really well, though, is what it doesn't do. It doesn't touch heavily on the Silver Surfer, yet gives audiences enough of a peek at the man to give us fanboys hope that the character will be resurrected -- ideally in the hands of a finer director. In Marvel, we trust.