Cyanide is a film that shocks as well as surprises you. The film by A M R Ramesh -- who was groomed at the Chennai film institute -- is undoubtedly a top class effort.

The film is based on incidents that occurred in Bangalore after a group of Tamil tigers responsible for the assassination of former Prime Minister Rajiv Gandhi stepped into the city. The incidents have been narrated as they happened, minus any masala. The narration is gripping, and the director has managed to maintain edge-of-the seat storytelling throughout.

Cyanide manages to spring a lot of surprises despite the director following a textbook narrative. You will relate to incidents as they unfold and the film will definitely bring back memories, some of them horrifying.

Ramesh wins a major battle by selecting the right actors, who look every inch the characters they play. For instance, Rangayana Raghu even resembles Ranganath, who sheltered the militants. National Award-winning actress Tara has recreated the trauma of Ranganath's wife Mrudula and looks every inch the agitated housewife. Marathi actor Ravi Kale and Malavika have the body language and mannerisms of one-eyed jack Shivarasan and Shubha. Other important characters -- like police officers Karthikeyan and Kempaiah -- have been performed by veteran artists Nasser and Avinash, who have done a very good job.

Going by the way it is all packaged, the director gets a perfect ten. His dialogues are crisp, narration has good pace, camera angles and lighting match the mood and the background score fits perfectly. There isn't a single dull moment in the film. Best of all, the film is not gory, even though the story has all the elements to make it such. The director restrains himself by not allowing the film to deviate into the regular commercial format.

Cyanide has no songs and there is no place for them in this 115-minute drama that may emerge as a milestone in the history of Kannada cinema. It is an outstanding effort that needs appreciation and applause. 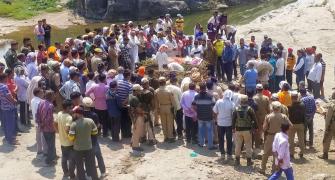