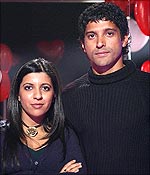 After directing brother Farhan Akhtar in her critically acclaimed debut Luck By Chance, filmmaker Zoya Akhtar is all set to repeat him in her next untitled project.

Zoya, daughter of noted lyricist Javed Akhtar, explored the underbelly of the Hindi film industry in her first film. She is now dabbling with the genre of road movie, with Farhan playing one of the three leads.

"This film is about three boys set up in Spain on a road trip. It is coming of age kind of genre," Zoya said on the sidelines of 11th Osian's film festival.

There had been talks of Hrithik Roshan set to play one of the three leads in the film but the director denied to confirm the news and said, "I am still wrapping up the script with Reema Kagti and will soon sit with Farhan to write the dialogues for the film. We are still to decide on the cast so I would not like to divulge anything about that."

"During the making of Luck By Chance, I told Ritesh Sidhwani (producer) that I want to go out for my next film where I have just three actors to work with as opposed to the heavy cast (in her earlier film)," she added.

India tells citizens to stay away from Pakistan