News
Business
Movies
Sports
Cricket
Get Ahead
Money Tips
Shopping
Sign in  |  Create a Rediffmail account
Rediff.com  » Movies » The top films at the US box office

The top films at the US box office

There has really not a single popcorn movie this summer as yet --- last year around this time Indiana Jones and the Kingdom of the Crystal Skull and The Dark Knight were setting records around the globe and there were long lines outside the theatres showing them.

But the worldwide success of Terminator Salvation and Angels & Demons has created quite a bit of excitement in the last few weeks. Both movies are doing okay business in North America but outside the continent, they are showing stronger power that will take them into the profitable category in a significant way.

While the popcorn movie of the season could well be Harry Potter and the Half-Blood Prince, which begins rolling out worldwide following a July 6 premiere in Japan, the market place is turning quite a few unexpected hits. In North America, for instance, the raunchy comedy The Hangover flew past the expectations and grossed a healthy $43 million, narrowly missing the number one spot held in its second week by the Pixar-Disney animation smash hit, Up.

The endearing and imaginatively made Up, the story of a floating house, its grouchy 78-year-old owner and an eight-year-old stowaway, is yet to open in major foreign territories. It is the kind of a rare summer film that will open strongly and while other flashy summer hits fade out in a few weeks, would stay on for many months. 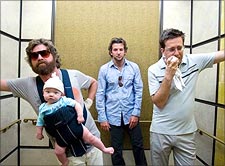 Critics in North America were more generous to The Hangover than to other comedies including the Ben Stiller starring Night at the Museum: Battle of the Smithsonian, which has nevertheless become quite a hit.

The film about a handful of men trying to reconstruct what happened at a wild Las Vegas bachelor party when they lose their about-to-be-wed buddy, The Hangover, benefited from a good buzz and positive reviews.

'Director Todd Phillips (Old School) has a knack for extreme scenarios and outside-the-box casting. He has made a movie that is consistently funny from start to finish,' wrote USA Today, which gave the film three stars out of four. 'At the center of the mayhem is a likeably weird trio whose chemistry works like gangbusters and fits seamlessly into the rowdy series of events.'

In Chicago Sun-Times, Roger Ebert giving the film three and half stars out of four, wrote: 'Now this is what I'm talkin' about. The Hangover is a funny movie, flat out, all the way through. Its setup is funny. Every situation is funny. Most of the dialogue is funny almost line by line. At some point, we actually find ourselves caring a little about what happened to the missing bridegroom -- and the fact that we almost care is funny, too.'

Unlike the major summer hits so far, each of which cost over $150 million, The Hangover was made for about $50 million, according to trade publications.

The Christian Bale-Sam Worthington starring Terminator Salvation, which broke wide over the weekend after playing in a handful of countries outside North America claimed the number one spot with $67.5 million in 70 markets, according to distributor Sony. The last film in the series Terminator 3: Rise of the Machines released six years ago starred Arnold Schwarzenegger in the title role. When the new sci-fi thriller was released in North America several weeks ago, box office analysts thought Bale was not in league with Schwarzenegger. But it now looks like the Bale movie has strong legs abroad and be as formidable a player as the Schwarzenegger vehicle. Terminator 3 had grossed about $285 million outside North America. Though the new film may not reach that figure, trade observers believe that it will make at least $220 million, giving Bale yet another hit following last year's The Dark Knight. 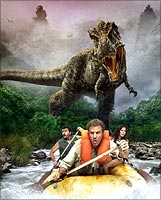 But it is not that every big budget summer release is turning into a goldmine. The Will Ferrell comedy Land of the Lost, which hauled a $19.5 million over the weekend across North America and which had also angered many critics, could be a loser at the box office unless it does extraordinary business outside North America.

'Ferrell's box office fate was sealed long before the movie even came out, wrote Entertainment Weekly. 'For months, the trailers of the erstwhile SNL star's riff on the not-very-good-to-begin-with '70s Saturday morning kiddie TV show have been greeted by mild chuckles at best. It had the stink of death on it long before this weekend. If you found yourself laughing at all at the trailer, it was more out of conditioned response to Ferrell's previous track record than the actual goods being sold this time around.'

Though many reviewers found Ferrell's movie tasteless, the most savage criticism came from Entertainment Weekly. 'Land of the Lost is just the latest proof that Ferrell's shtick -- the clueless, self-deprecating blowhard man-child -- is growing stale,' the publication wrote. 'You can put him in a NASCAR jumpsuit, a basketball uniform, or a quantum paleontologist's khakis, but he's pretty much always the same guy. You know that at some point he'll take off his shirt and reveal his flabby belly, or dump dinosaur urine on his head, and then mug at the camera as if to say, Ain't it hilarious? Well, yes it was... the first time.'

Early this year, Ferrell made a triumphant Broadway debut in the solo comedy You're Welcome America: A Final Night With George W Bush. His fans who made his films such as The Anchorman would be disappointed with the reception his new film has got. But in show business, many people believe, there can be a surprise hit around the corner.