Celebrations and more on TV

Can't get enough of television? Grab your weekly buzz right here! Here's the gossip from the industry.

Ram Kapoor may play the hard-nosed businessman as Jay Walia in Kasamh Se, but in real life, he is a sensitive, family man.

This was evident last Saturday, when his daughter Sia turned two months old and he decided to celebrate the day. Ram and his wife Gautami thought up an equally special way of celebrating the occasion. They spent the day with nearly 100 children at the Tata memorial cancer hospital. What's more, they are planning to make donations towards the welfare of those
children. Surely, there's a lesson there for those who splurge senselessly on birthdays. 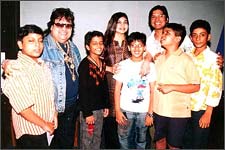 Former Prime Minister Atal Behari Vajpayee wrote in to congratulate all the l'il champs on the contest and hailed the show for being a splendid platform for talented youngsters.

Vajpayee is a rare PM, who is as well known for his poems as he for his speeches. But he must be the only one to follow the fortunes of little singer as keenly as he follows the exploits of his fellow politicians.

The crew and cast of the serial Saarthi sure are a playful lot.

After a football match to celebrate their centenary, the  the crew and cast of Saarthi decided to celebrate Janmashtami on the sets. 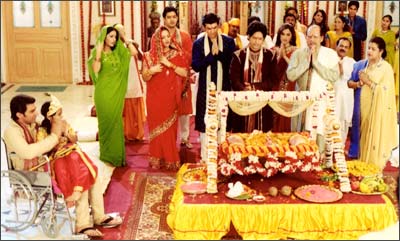 The serial revolves around the life of Lord Krishna and the Goenkas, who live in Heritage House where the serial is being shot, are great Krishna devotees. The setting was therefore perfect for the Saarthi crew.

They got over 150 kg of marigold flowers for Krishna's customary cradle and set up a dahi-handi. Together, they had divine fun in reel and real life.

Some time back, we had talked about Kanchi Kaul being very tech-savvy, carrying PDAs, and other hi-tech gadgets around.

The technology rage seems to be catching on in the acting community now. Manoj Bohra (Prem in Kasauti Zindagi Kay) has gone and launched his website (www.manojbohra.com).

He may be merely playing 'Follow the leader', after Bollywood.