Sadly, the educated and upper classes have stopped watching television shows because of the availability of the Internet.' 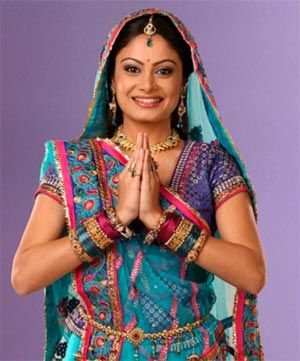 Television shows, these days, are all about numbers.

“Numbers have become so important that if a show isn’t doing well, or if it is taking time to settle in, people change the DNA of the show,” Gajra Kottary says.

Kottary is one of the writers of Balika Vadhu, a hugely popular show that has been on air for over six years now.

The numbers game is also one of the reasons why the ‘soapiness’ is increasing in Indian television and the reason why we cannot rise above the drama in the great Indian family.

“It’s very difficult to explore new subjects because the numbers ticker is constantly ticking in your head,” she says.

Gajra, who has recently penned a fiction novel called Once Upon A Star, to get over her work pressures and frustrations, tries to explain why Indian television is not at par with international fare.

In the picture: Toral Rasputra as Anandi in Balika Vadhu

How did you start out as a telly writer?

I was a housewife for eight years, bringing up my two kids. That’s when I discovered I loved writing fiction and wrote my first book of short stories.

I gave that book to Mahesh Bhatt, who was associated with the Plus channel. My husband was also working in Plus channel then.

His wife, Soni Razdan, read the stories. She was getting into television at that time and asked me if I would like to write for some shows.

That's how, in 2001, I started writing for a weekly show and loved the experience. After Astitva, there was no dearth of offers for television shows.

How did you pick your shows?

Creative people tend to get very insecure because sometimes, even after a very successful show, you may still be sitting at home for a whole year.

Sometimes, you get offers from the channels. You may take it if the money is very good but you need to exercise your choice. That’s why I’m doing fairly good work.

The concept of my new show, Satrangi Sasural, was given to me and my team of four writers by Zee TV. We have worked together for over 15 years on shows like Astitva, Jyoti, Balika Vadhu and Veera.

I thought of the concept of Godh Bharai and offered it to Sony Entertainment Television.

Why haven’t you tried thrillers?

I don’t enjoy writing thrillers, though I love watching them. I would record 24 if I missed an episode. It was a break for me.

I’m completely seeped in my shows because I’ve been doing it for so many years. I have a lot of stories inside me. It’s like Draupadi’s sari, it goes on and on -- you discover more and more and more.

But television, these days, has become too ‘soapy’.

It’s true. A lot of people tell me that they used to love Astitva and Balika Vadhu but not any more.

I went for a seminar for writers, broadcasters, producers... and everyone was tearing their hair because of the numbers game.

Numbers have become so important that if a show isn’t doing well, or if it is taking time to settle in, people change the DNA of the show.

It has become very difficult to explore different subjects. The numbers ticker is always ticking in your head. It’s very stressful, and the pressure in the last two-three years has increased.

I write books to battle that frustration because I have complete freedom and don’t have to battle any pressure.

Who is your target audience?

The audience pyramid is becoming bigger and bigger.

Sadly, the educated and upper classes have stopped watching television shows because of the availability of the Internet.

So increasingly, we have to write in a manner that appeals to this strata. If we get too intellectual, they will switch off. And they are our advertisers’ market.

Take the number one show of today, Diya Aur Baati. It has a fantastic theme. This girl is married a halwai (sweetmaker) but she wants to get into the police force. And he’s helping her fulfill her dream.

People have really connected with that.

Every girl in that chawl is going to think that she wants to do something with her life but she’s shackled in life because her parents will probably want to get her married off, and she’s probably going to have a monster mother-in-law. She knows how her life may turn out but she dreams of having a husband like that.

So we have to write within the parameters of what people would like to watch.

At the same time, you can’t be too repetitive. People may watch Duplicate 1 and Duplicate 2 but they won’t watch the third one. And that’s where television writers are going wrong -- they are only sitting and doing maths. That doesn’t work beyond a point.

How difficult is it writing Balika Vadhu, which has been going on for six years?

It’s very tough. We keep weaving new ideas in the main storyline. We know the audience will not accept certain things. For example, Anandi will never do something that is unethical because people look up to her. So we can’t play with that.

But within the parameters, we can play with the story -- the social problems that come to her, how people try to manipulate her and how she emerges heroic. 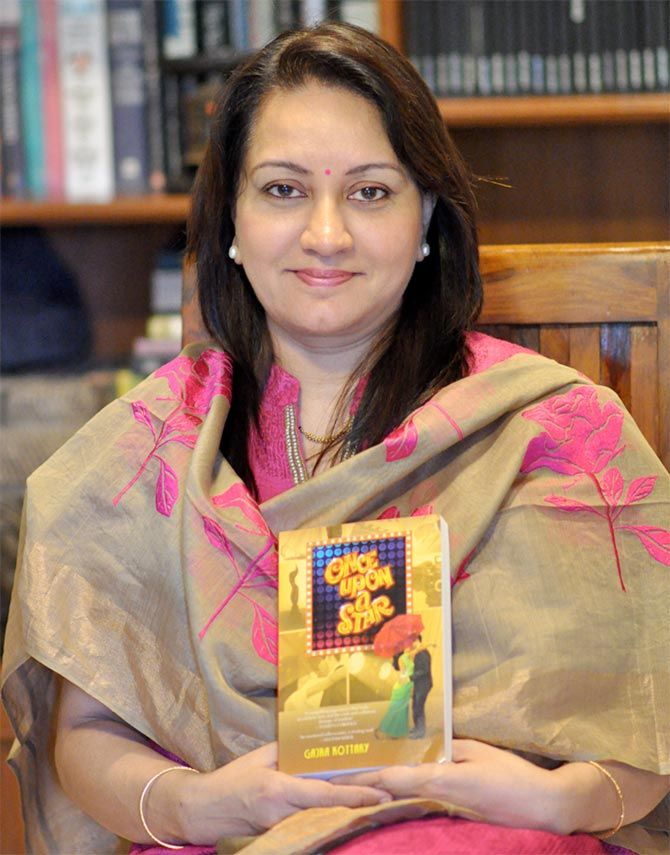 Image: Gajra Kottary shows off her new book Once Upon A Star

Tell us about your new book, Once Upon A Star. Your protagonists are named Raj and Simran. Are you a fan of Dilwale Dulhaniya Le Jayenge?

I liked the film. The reason I used the names Raj and Simran is because they’re the perfect couple but, in real life, there are no perfect couples. My idea was that perfection can be broken too.

The third character in the book is Sia, which is another name for Sita -- someone who can do no wrong.

Once Upon A Star is about a Bollywood star couple named Raj and Simran, whose marriage falls apart when Raj falls in love with an upcoming actress named Sia and has a child with her.

You explored a broken marriage in your first book, Broken Melodies, as well.

Family relationships mean a lot to me. I write about them in my shows too. That has become my genre.

Once Upon A Star is a woman who gets shattered, but picks herself up again. Showbiz makes it more challenging to make a marriage work. It’s not easy for today’s superstars; even their kids are recognised today.

You had worked with Honey Irani on a film script earlier. Is the book inspired from her life? Or is it closer to Boney Kapoor’s former wife Mona Kapoor, with whom you were a Facebook friend?

My heart went out to what Mona Kapoor went through. It is not her story but she was a huge inspiration to me. One of my biggest regrets is that I never actually got to meet her because I did not realise how seriously ill she was.

I’ve often noticed that unless there’s a crisis, women don’t feel motivated to discover their own identities. Women are very complacent -- they revel in being mothers, wives, etc. Then suddenly something hits them and their whole identity, in terms of their husband, is taken away. That’s when they realise that they do have strengths of their own.

I have had friends who have gone through this. I watched the whole gamut -- the first seeds of the fact that there might be a break-up, to denial, fighting it out, trying to lose weight...

I have even had a friend who tried to look like the other woman so that she could appeal to her husband. That was so painful for me to watch.

Which Bollywood family, do you think, fits the Mehras (Raj’s family in the book) the closest?

In the book, Raj’s sister Ashima is the first girl in the family to act in the movies and she had to face a lot of familial resistance before she could become an actress.

Karisma was the first of the Kapoor daughters to become an actress. There was some resistance but she managed to become a top star.

But my book is not based on any real life film person.

Yes, but they’ll be biased.

We have made two trailers of the book, and my son Advait has acted in them.

My husband works with Anupam Kher’s An Actor Prepares and we have two students from there to play Simran and Sia in the trailer.

When we were shooting one of the trailers (watch it above), my son, who plays Raj, has to stand in front of a makeup mirror, with Simran and Sia on the two sides of the mirror. At one point, he had to kiss a girl. He was very nervous because his parents were watching. That was very funny but he was a brave boy. 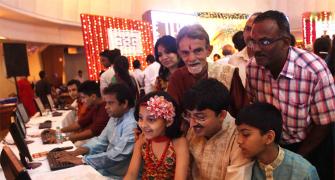 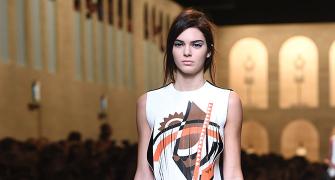 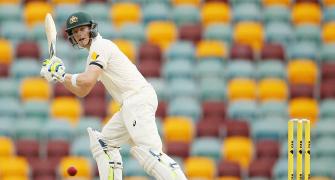 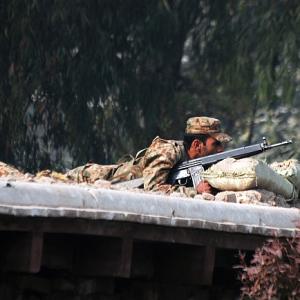