The JINX Shabana Wants to BREAK!

'My entire house turn their backs on me when a cricket match is happening.'
'The minute I look at the TV screen, an Indian player gets out.'
'So if I do enter the room, I have to sit with my back to the TV.' 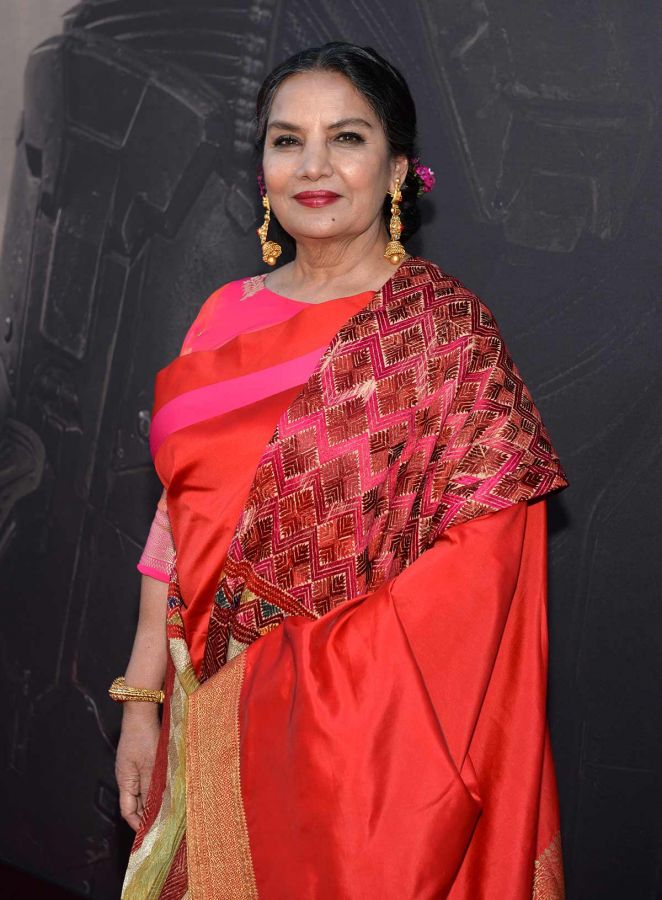 When most people were locked in their homes at the height of the COVID-19 pandemic, she was shooting for the Shekhar Kaur directed British romantic comedy, What's Love Got To Do With It?

Then, it was Steven Spielberg's $200 million Web series Halo, based on Microsoft's iconic video game, about aliens who threaten human existence in an epic 26th century showdown.

She was involved in a near-fatal road accident while on a break from that shoot, but 20 days after being discharged from hospital, Shabana was back on the set in Budapest.

Currently, she is filming a sports film, Ghoomar, with R Balki, reporting for it a day after flying home from the Los Angeles premiere of Halo.

In a conversation with Rediff.com Senior Contributor Roshmila Bhattacharya, the internationally acclaimed actress says, "The portrayal of women particularly is undergoing a change which is healthy. But I think care should be taken to ensure that they don't get reduced to prototypes."

What was the Halo premiere in Los Angeles like?

The red carpet was very organised and every member of the cast got their place in the sun.

The premiere was at the Hollywood Legion theatre and we had an after party where we really let down our hair.

There was much cheering and hugging, we were all on a high. 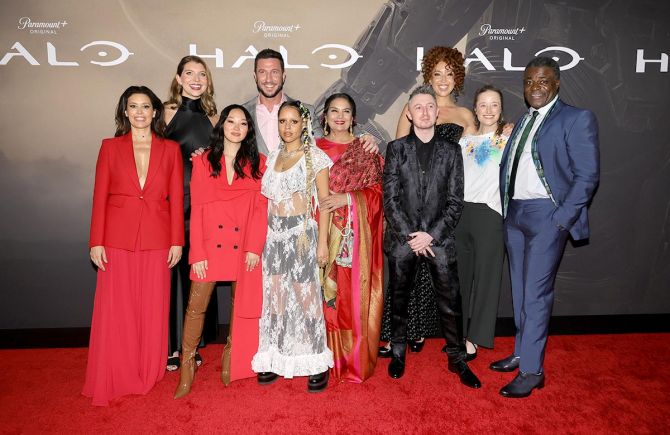 You looked absolutely stunning in the red silk sari.

I was sure from the start that I was going to wear a sari although my designer friends had generously offered to make me outfits.

Ultimately, I chose a silk sari woven by a weaver in Mubarakpur with a real zari border and pallav and a mithai pink Benarasi blouse by Manish Malhotra which I paired with an antique phulkari shawl, an heirloom.

Yerin Ha, who plays Kwan in the series, also wore a red dress whilst everybody else was mostly in black.

It reminded me from one of your looks in Rocky Aur Rani Ki Prem Kahani.

My look in Rocky Aur Rani Ki Prem Kahani has been created entirely by Manish Malhotra and Karan Johar.

I tried resisting in the beginning, but Manish knows exactly how to persuade me and Karan is Karan! What was the experience like working with Dharamji again and Jayaji for the first time?

Dharamji and I connect over Urdu poetry.

Sadly, Jaya and I have very little screen time together, but whenever we are on set, we chat nineteen to the dozen about politics and many other topics.

Halo has opened to mixed reactions with some liking the series because it is very different from the game while others have been complaining that it is nothing like the show. One review groused that you were 'criminally underused'.

This is the expected response.

The Halo video game has very loyal fans who have definite ideas about no deviation from the game.

We have been as true to the game as we could be, but we have to tell a story over nine episodes, so there will be differences.

Paramount has clocked in 32 million views for the first two episodes and they are very pleased.

We are going into the second season as early as July, so all's good. 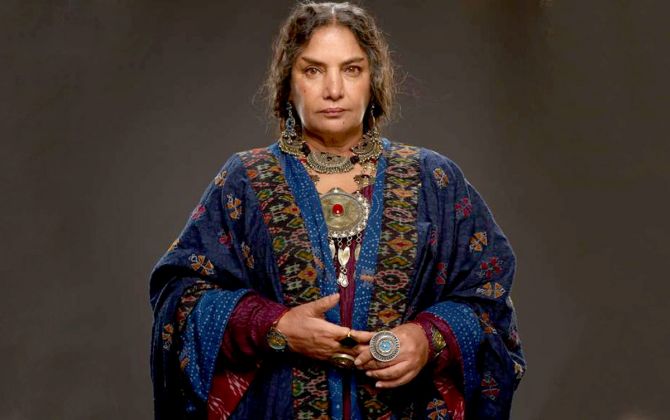 IMAGE: Shabana in The Empire.

In Nikhil Advani's historical series, The Empire, your character, Begum Esan Dawlat, Babar's grandmother, was also a very strong and powerful woman, a king-maker so to say.
In Halo, your character Admiral Margaret Parangosky is the ice-cold, ruthless director of the Office of Naval Intelligence.
Would you agree that OTT has opened the doors for our actors with respect to multi-layered roles of substance?

I think OTT platforms have realised that content is king.

Also, because they are not so hell bent on the collections of the opening weekend, they can afford to explore content that is not weighed down by having to cater to the lowest common denominator.

The portrayal of women particularly is undergoing a change which is healthy.

But I think care should be taken to ensure that they don't get reduced to prototypes.

This is a great opportunity to make a bouquet of stories and create stars out of newcomers instead of chasing the established ones.

I also feel documentaries that have archival value should be made.

During the shoot of Halo, for a while you lived all alone in an apartment in Budapest in the dead of winter. How did you keep yourself occupied during this time alone?

I enjoy time on my own.

I find listening to music is a very personal choice.

I also enjoy buying groceries even though most of the time I don't know what to do with it.

I can't cook to save my life.

When in Budapest, I would call up Chef Vikas Khanna in New York to complain that my dal was not galoing (turning soft and digestible)! 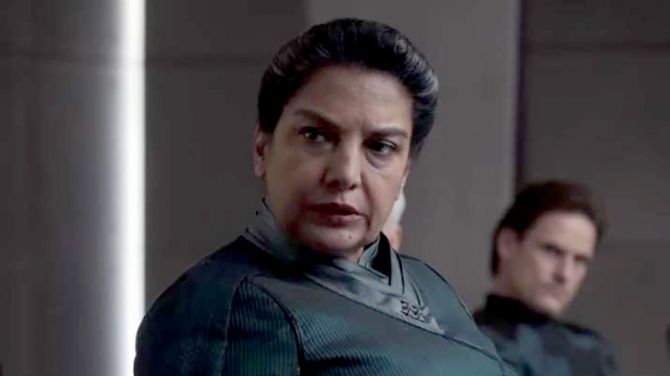 Would you be able to cook a meal for the family now?

My father (poet-lyricist Kaifi Azmi) was the only person who would eat a dish cooked by me even if it was kachcha (uncooked).

Abba would say, 'Wah kitna lazeez banaya hai! (What a delicious meal!)' (Laughs) The rest of them run for their lives.

You have returned home from the Halo premiere in Los Angeles and immediately jumped into the shoot for R Balki's Ghoomar, also featuring Abhishek Bachchan and your niece, Saiyami Kher, as cricketers. From a futuristic sci-fi to a sports drama, what's it like?

My entire house, including the staff, turn their backs on me when a cricket match is happening.

Nobody will even fetch me a glass of water!

The minute I look at the TV screen, an Indian player gets out.

So if I do enter the room, I have to sit with my back to the TV. 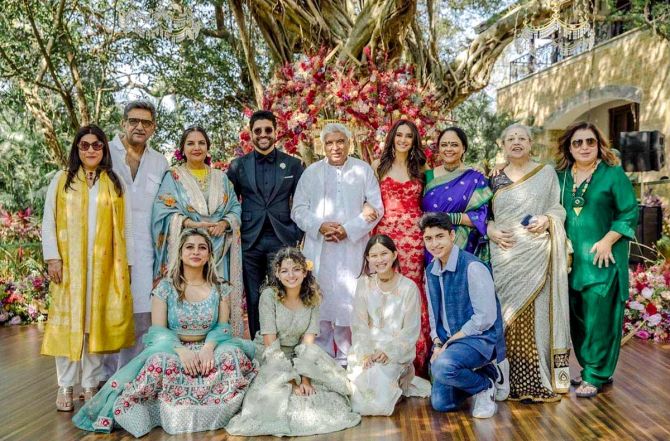 One of the most beautiful weddings we saw recently was that of Farhan Aktar and Shibani Dandekar taking their vows in your Khandala home, Sukoon. What are your memories from this wedding?

It went according to plan, simple, intimate and elegant.

When they read out their vows to each other, I had tears streaming down my face.

It was so moving.

Javed Akhtar and you could feature in an ad for a perfect marriage. What makes you such a compatible couple?

Javed is not only my husband, he is also my best friend.

We have never spent as much time together as we did during the pandemic.

That's when we realised that we actually enjoy each other's company even though we have many dissimilarities.

He complains that I am constantly moving while I protest that he is forever sitting.

I think of the smaller picture, he has a cinemascope vision.

He will leave everything to the last moment, I like to complete things before time. 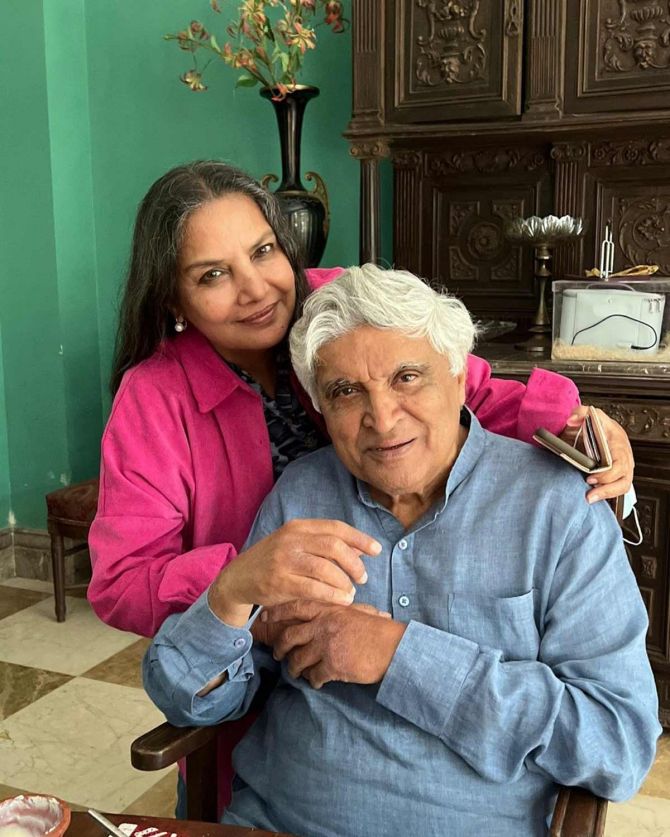 And what happens when these dissimilarities lead to disagreements?

When crucial decisions have to be taken, I trust him completely.

I respect his wisdom, his clarity of thought and his values.

The magic word we have benefited by greatly is 'Drop it!'

When we are in the midst of a heated argument, if either one of us says, 'Drop it!', we do just that, and take it up later when we have calmed down and have the bandwidth to actually listen to each other.

This has held us in very good stead because it prevents us from saying very hurtful things in the heat of the moment only to regret them later.

Zabaan ek baar khul gayi toh... (Once you open your mouth...) the damage is done. 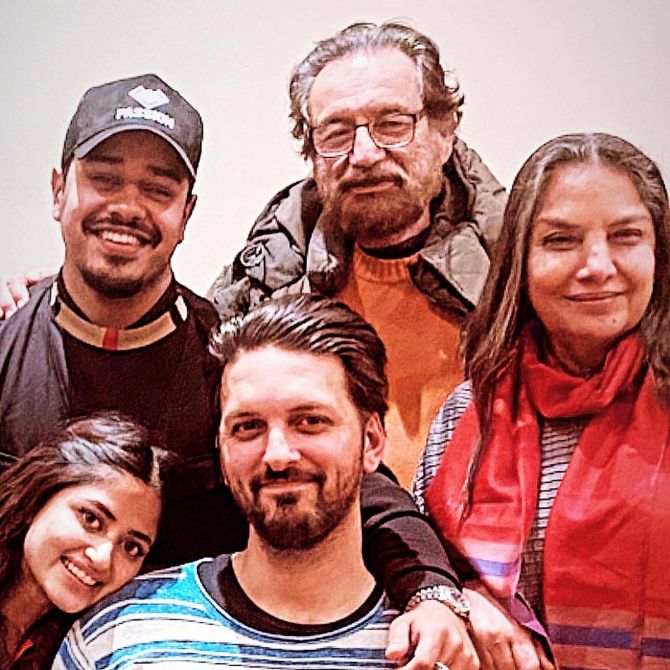 IMAGE: Shabana, Shekhar Kapur and the cast of What's Love Got To Do With It?. Photograph: Kind courtesy Mim Shaikh/Instagram

When do we get to see you in What's Love Got to Do With It? (a cross-cultural story about love and marriage, written and produced by Jemima Khan, and also featuring Emma Thompson and Lily James)?

I saw a trial of the film in London with some friends recently and the reaction was very positive.

It can be best described as a romcom with a heart!

It's likely to get released in the summer.

It reunited you with your Masoom director Shekhar Kapur.

I picked up with Shekhar as though Masoom had been made yesterday!

He is very gentle on the sets, loves his actors and is infinitely patient.

Also, he is the rare director who doesn't sit at the monitor and stays in the same room as the actors. I find that very comforting.

Mujhe aise laga hi nahin ke hum itne waqt ke baad saath kaam kar rahe the (I never felt that we were working together after such a long time). 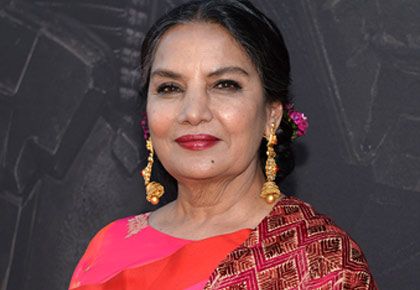 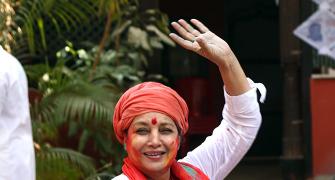 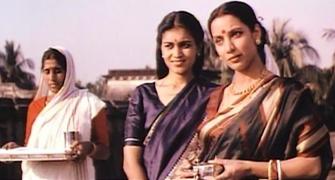 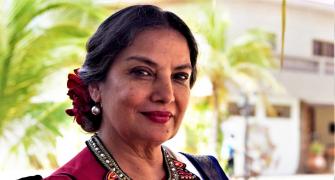 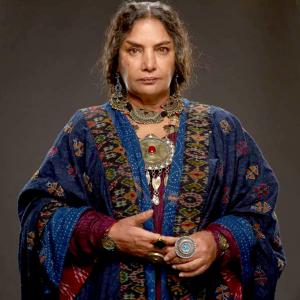 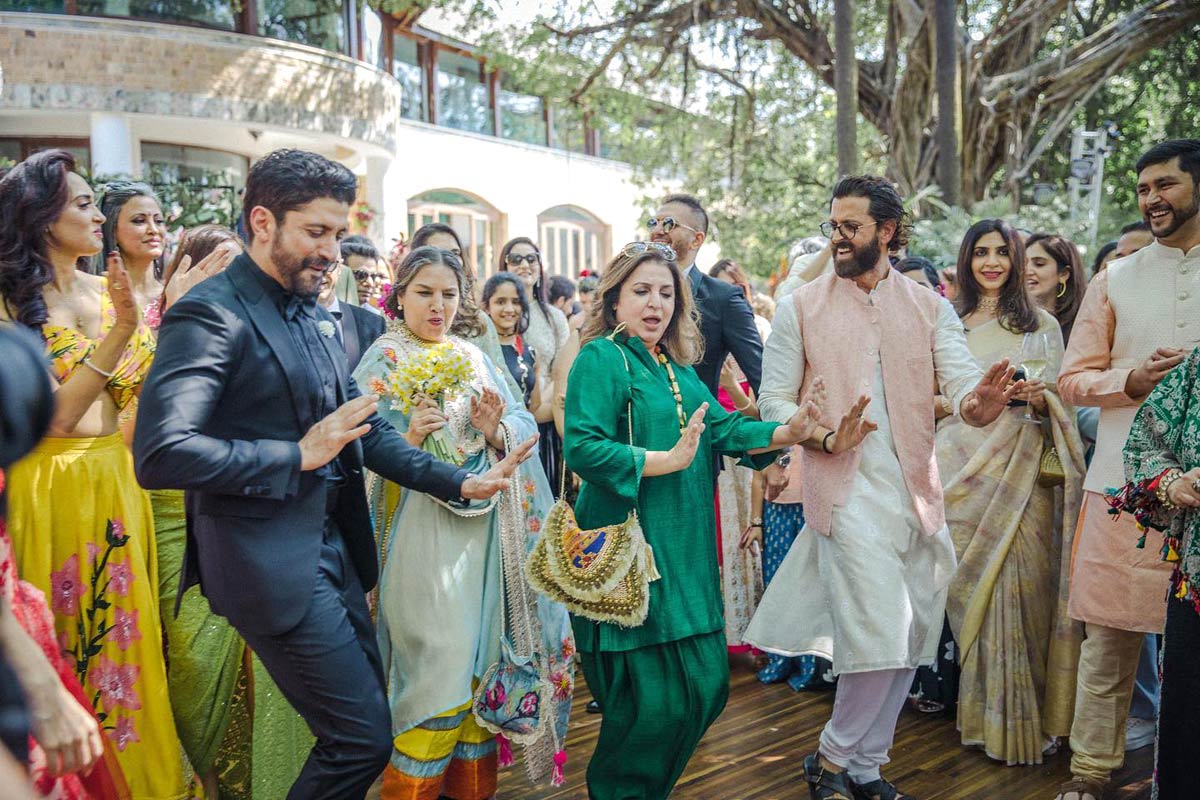 'Men should only be visitors'