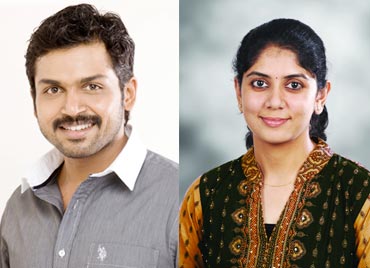 Tamil actor Karthi is all set to tie the knot with Ranjani, daughter of Erode Chinnasamy and Jothi Meenakshi Sneha Reddy.

Ranjani has done her M.A in English Literature and is a gold medalist from Stella Maris College in Chennai.

Karthi, who made his acting debut in 2007 with the top-grossing film Paruthiveera, is the son of actor Sivakumar and younger brother of superstar Suriya.

He completed his MS in Industrial Engineering from New York and returned to Chennai to try his luck in films.

The marriage has been arranged by the elders of the family and will take place on July 3 in Erode.