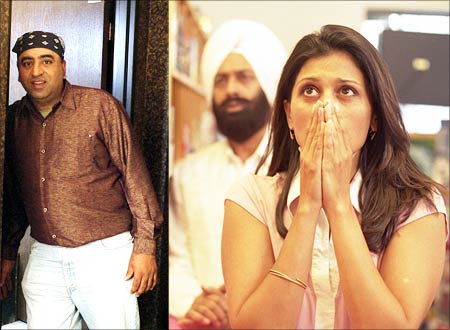 Sweet Amerika, a feature film to be released on September 19 in seven cinemas in Toronto, Vancouver, Edmonton and Calgary, is inspired by the murder of Arizona-based Sikh businessman Balbir Singh Sodhi in the wake of 9/11.

"This movie grew out of Sodhi's murder that followed the frenzy after 9/11," said the director and script writer, Vancouver-based journalist R Paul Dhillon. "The film is inspired by this tragedy and the true events surrounding it."

The movie was shot mostly in Vancouver and New York. Dhillon, who is taking on his debut feature film, his earlier work being documentaries, called it a moving story.

'Sweet Amerika is a probing portrait of immigrant life in America that follows Bobby [played by Bollywood actor Gulshan Grover] on his journey to find and preserve his piece of the American dream in a world where concepts like freedom and democracy seem to stand on shaky ground,' Dhillon said in the media brief for the film.

"The story is about the life of immigrants in the US and the hardships that they are encountering as part of their adjustments in the US," he said.

Dhillon said Grover's character, while still mourning the loss of his wife and son, 'finds new hope in Mina [played by Sian Sladen], a young, vibrant Muslim woman. Although opposed by the Sikh community, Bobby's love for Mina holds the key to reviving his broken spirit.'

The film's budget was half a million dollars. "It is a low-budget movie," he said.

Dhillon is an award-winning producer and filmmaker who over the years has produced a number of documentaries, like Tears And Sighs on alcohol abuse in the South Asian community; Planet Aaj, a South Asian variety show shown on Baton Broadcasting's VTV; and The Saint Soldier, on British Columbia's Sikh community.