Making the cut at an American TV show

To make the cut for the nationally televised Jeopardy! Collegiate Championship is no small feat. Suchita Shah reflects on her 15 minutes of fame.

I'm a senior at the University of Wisconsin-Madison, the host school for this year's Jeopardy! College Championship.

The adventure really kicked off when some members of the Clue Crew, and the contestant coordinators, landed in town a couple of months ago to audition the many brilliant Badger hopefuls. I had passed the online test in the fall of 2007, so I had an audition spot reserved.

After a grueling 50-question test and an invigorating mock game, we were told to write down our minute-by-minute schedule of where we would be on Friday so they could tell us in person if we made the show. Next day, they surprised me with balloons and TV cameras to tell me that I was selected to be the one representative from UW at this year's Jeopardy!

To participate in the contest was one of my life goals. I've watched the show for as long as I can remember, and it has been a dream to meet Alex Trebek, the host of the show. I'm a neurobiology major, but I've spent most of my three years of college volunteering for political campaigns and leading a political student organisation. I also write for a school newspaper, have done research in art history, played in the university band, and I sit on university governing committees. My passions are many and varied, and I think it has helped me gain the breadth of knowledge necessary for Jeopardy!

After I graduate in May, I'm headed to medical school in the fall. I hope to earn both an MD and a Masters in Public Health, and eventually work in public health policy, influencing it from a physician's perspective. I would love to specialise in community health and/or international health. Ultimately, I dream of one day being the US Secretary of Health and Human Services. 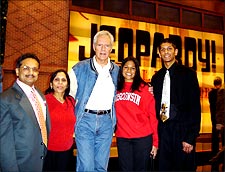 I don't know what I was expecting, but all the other contestants were absolutely wonderful!  They were fun and friendly, and we all bonded immediately. I don't know if I was expecting us to be antisocial or awkward, but everyone is fantastic and definitely has a vibrant personality. Sure, there was the gentle ribbing and jokes about rival schools, but it was all in good fun. And that's what we were all there for -- to have fun.  Of course we all wanted to win, but, for me, the coolest part was that I was there in the company of 14 other amazing individuals, and fulfilling a life dream.

The first day did indeed feel like a dream. It was a surreal experience; it hadn't sunk in yet that I was actually going to be competing on national television. It was a media frenzy, involving filming promos and doing interviews with local media. Most of the media outlets had the typical questions like How did you prepare and are you nervous -- but what stuck in memory was when I was asked to sing the school's fight song, On! Wisconsin.

Anxious does not even begin to describe how I felt on the first day of taping. My stomach was churning, and I felt like I had overindulged on espresso shots even though all I had drunk was about ten bottles of water -- which led to as many trips to the bathroom. Yeah, I guess you could say I was a little nervous.

There were about 3,000 people in the Kohl Center (University of Wisconsin) to watch the Jeopardy! tapings.  For most of the day, our friends and family probably didn't even realize that we were there, at the filming location, hiding and waiting. We contestants were not allowed to talk to the audience members or basically even acknowledge their existence. Before our turn on stage, we were sequestered in the Green Room with some snacks, cards, and movies. It was fun, and I'm glad I wasn't in the first group of three, but after a while, I just wanted to get out of that dull white-brick-walled room.

Finally, it was my turn. I was up against Katie Winter from Tufts and Danny Devries from Michigan. The game itself was a blur -- it went by so quickly!  Of course, there were clues that I wish I would have thought about a bit more before blurting out an answer, or should have taken a second longer to enunciate my response, or probably could have made a guess and gotten it right. But it's useless to keep thinking about the past; what's done is done. I can't beat myself up over three or four clues, though I know I won't ever forget those answers again.

When it came time to wager for Final Jeopardy in my quarter-final game, my debate was whether to wager enough to beat Danny if he answered incorrectly, or to stay alive as a wild card. I decided to play it safe and bet $2008 (my graduation year), which was thankfully enough to move me on to the semi-final round. I didn't find out, though, until the three of us (Danny, Katie, and I) were on stage with Alex after the show. He leaned over and told me that I had enough money to move on to the next round. It was awesome hearing my name called as a semi-finalist, and having the crowd cheer me on.

I was less nervous for this second game, surprisingly. I think it was because I had already gone through the experience once and knew what to expect. And I was happy with how I had done.

I was up against Joey Beachum of Mississippi State and Vera Swain of South Carolina, and surprised myself with how quick I was on the buzzer. I guess I had gotten used to it. I think I played better this time around than the first one.  But Joey found all three of the Daily Doubles, so it was a close game going into Final Jeopardy. Oh, Final Jeopardy What can I say?  It was what it was. I'm bummed that I didn't get it right, especially because I second-guessed myself.  But I'm also thrilled that Joey, who did answer correctly and won our game, went on to become the champion.

Looking back, the whole experience seems like a lifetime ago. I've forgotten a lot of what my categories were, or even which ones I answered; it's definitely a blur. But what I do remember are the people.  Before we left our hotel in Madison, the other contestants and I all signed each others' shirts with messages and memories from the weekend.

I am not yet sure what I'm going to do with my $10,000. The sensible thing would be to pay off student loans, or invest it and use it to pay for some of medical school. However, I definitely want to have some fun with it. My friends have been demanding that I throw them a party, or at least buy them dinner, so of course that's on the list. But I really want to travel.  I have no idea where yet, but I know I would love to go abroad again. Maybe back to India to spend time with my grandparents.