Mohanlal to fight in Kashmir

Mohanlal will be in Kashmir by the end of this month for 20 days to shoot a film titled Keerthi Chakra, a Malayalam and Tamil bilingual.

In the film, the superstar plays the role of Major Javed Hussein, who fights terrorism in Kashmir. The film is directed by a former army officer, Major Ravi, who won the President's Gallantry Award in 1991 and 1992 for his contribution in fighting terrorism in Punjab and Kashmir.

Major Ravi was also a part of the group of officers who worked to capture Sivarasan, the prime suspect in the Rajiv Gandhi assassination case. Major Ravi was the first officer to burst into the house where Sivarasan was hiding. Major Ravi had earlier directed a film titled Punarjani with Mohanlal's son Pranav as the protagonist. Pranav bagged Kerala State Award's Best Child Artist prize for the film.

A premiere for animals

Premiere shows for charity are not new. But the premiere (actually two shows) for the Telugu film Sri Ramadasu -- based on the medieval composer -- is slightly different. The proceeds from sale of tickets are to be used for animal welfare  the two beneficiary organisations being The Blue Cross of Hyderabad (founded by Nagarjuna's wife Amala Akkineni) and People for Animals.

"We found Sri Ramadasu suitable as it has an underlying them of animal welfare," says Amala, a former movie star herself. This is the second time that funds are being raised for Blue Cross through a movie. Last year the star-studded premiere of Super helped the cause. The common factor of both films is Nagarjuna (co-founder of Blue Cross), who plays the protagonist.

"Since Nag is the chief patron of Blue Cross, he supports the cause. Twice a year we get this opportunity to raise funds," says Amala. 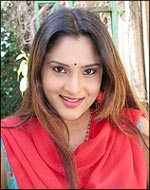 Ramya on a roll

One of her interesting future projects is Julie,  based on the Malayalam film Chattakaari, made in the seventies by National Award winning director K S Sethumadhavan. Sethumadhavan himself later remade it in Hindi as Julie.

The Kannada version will be directed by debutante director Purnima Mohan. Ramya's co-star in Julie is Bollywood actor Dino Morea. Another project of hers is Sevanthi Sevanthi, directed by S Narayan, in which she pairs up with Vijaya Raghavendra.

But according to Ramya, her role in Thananam Thananam -- directed by noted director Kavitha Lankesh -- is the most interesting of the lot. Ramya stars opposite super star Darshan Datta for the first time in the film. Darshan has turned producer recently for a film to be directed by his brother Diwakar.

It was Thankar Bachan who cast Cheran as a hero in Solla Maranda Kathai. After that, Cheran acted as the hero in his own two successful films, Autograph and Thavamai Thavamirundu. The former happened because no other actor was ready to act in it!

The story of Bachan's Azhagi was so powerful that critics' fave Nandita Das agreed to act in it, and the film turned out to be quite successful both critically and commercially.

Bachan's new film is titled Pallikoodam and the hero is Narain who came into reckoning as an actor of great calibre with the success of Chithiram Pesuthadi.