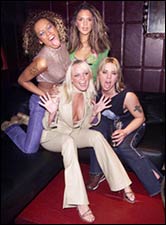 Although the five former Spice Girls held a reunion meal at the home of Victoria Beckham last month, the chances of a concert comeback seem bleak.

The meeting reportedly was the first time all five members of the group had come together since Geri Halliwell left the band in 1998.

Halliwell, Melanie Brown, Melanie Chisholm, Emma Bunton and Victoria Beckham dominated British pop music in the late 1990s, becoming Britain's most successful all-female group. But Halliwell left right in the prime of their success, and the remaining four did not record together after 2000.

The former Spice Girls have dismissed the idea of a comeback, but Mel C thinks they might strike a brief reunion in a musical.

'A musical could work. It would be fantastic. The soundtrack would be great and I'd like to do acting,' The Sun quoted Mel.C as saying.