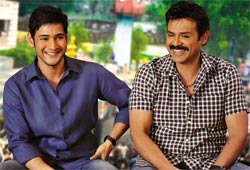 Director Srikkanth Addala's big project Seethamma Vakitlo Sirimalle Chettu (SVSC), the first big multi-starrer with Venkatesh and Mahesh Babu, which has been in the news ever since it was announced, is finally out in the theatres today.

The film is a good old family entertainer, without any violence, of the kind that was popular in the 1950s, '60s, and '70s. Those emotional family dramas touched a chord and the family values and bonding they showed are evident in SVSC too.

The film is a little long at about 160-odd minutes. While it cruises along smoothly, delving into relationships within the family, without too many conflicts or twists and turns, one feels an emotional disconnect sometimes because society has changed so much from what is portrayed on screen. In that sense, it seems more like wishful thinking on the part of the director.

The film is set in Relangi village in Coastal Andhra. It is about the family of Relangi Mavayya (Prakash Raj), a much respected elder, his wife played by Jayasudha, his mother played by Rohini Hattangady, his two sons Peddadodu (Venkatesh) and Chinnodu (Mahesh babu), his daughter played by Abhinaya and his niece Seetha played by Anjali.

Their temperaments are different. Peddadu is straightforward and strong-willed, while the humorous and handsome Chinnodu attracts the girls.

The temperaments of the two brotherswho are at the core of the filmis different. Peddadu is straightforward and strong-willed, while the humorous and handsome Chinnodu attracts the girls

Seetha is the outsider, and yet part of this loving family in which the father mouths dialogues about family and human values. The storyline is realistic, in that it is all about the happenings in a middle class home, but it's more about situations and doesn't develop as a story.

The film is rooted in the Coastal Andhra milieu and dialect which makes it hard to follow for those unused to the region.

The two superstars, Venkatesh and Mahesh Babu, are believable in their roles. Shorn of the heroism that usually marks their performances, they look different and refreshing. The scenes they appear in together are some of the best in the film.

Mahesh's scenes with Samantha are fun to watch. There are no comedians to provide the humour. Only Ravi Babu (with his stiff-shouldered pose) does so for a while. Otherwise it is Mahesh's lines that are woven into the script that provide the humorous touch.

Anjali makes an impact as Seetha. Samantha doesn't have much screen time but she does a good job. Prakash Raj is just right for this fatherly role, and so is Jayasudha. The two of them and Rohini Hattangady carry their roles elegantly. Rao Ramesh makes his presence felt.

So if you want to see a non-violent, family values kind of film, this one is for you. It's just that it seems a little out of date. The Best Telugu Actors of 2012

30 Years of Gandhi: The key players look back 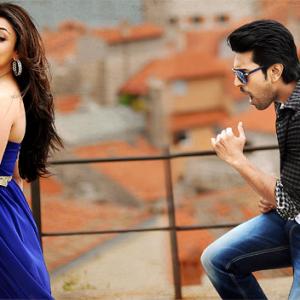