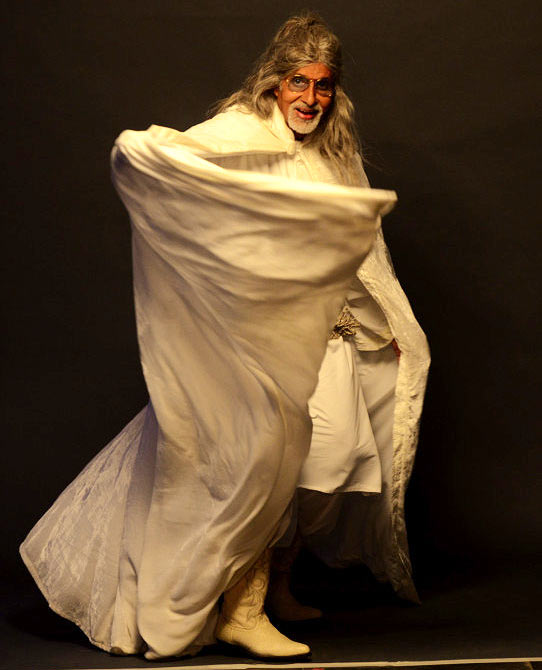 Amitabh Bachchan has altered his appearance quite a few times.

Getting under a new skin, donning various garbs, impersonating someone is the prerogative of every actor. And Bollywood legend Amitabh Bachchan, the biggest one of them all, has consistently lived up to such entitlement and produced memorable imagery.

Right from the disheveled, unshaven look in his first film Saat Hindustani to the latest Complan commercial, the 71-year-old superstar has altered his appearance for quite a few films. 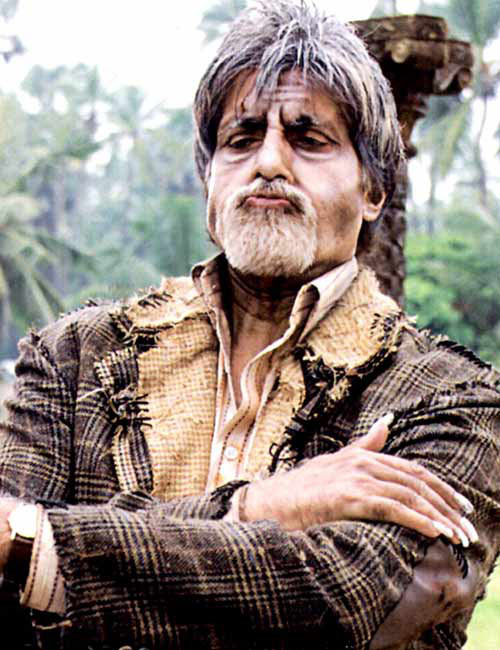 As the fearsome albeit friendly ghost Bhootnath, all set to reappear in a sequel, AB’s spooky Casper opts for a blend of tattered clothing and powdery makeup that’s more goofy than ghostly. 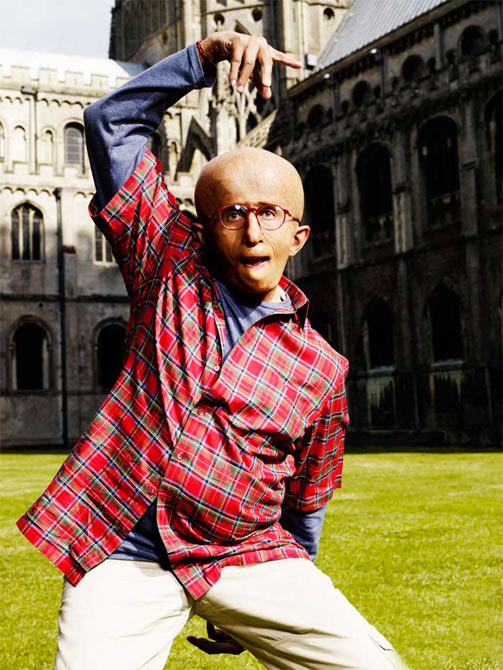 The actor wore layers of sophisticated prosthetic to portray Auro, a 12-year-old schoolboy suffering from a rare case of Progeria in R Balki’s moving tale, Paa. 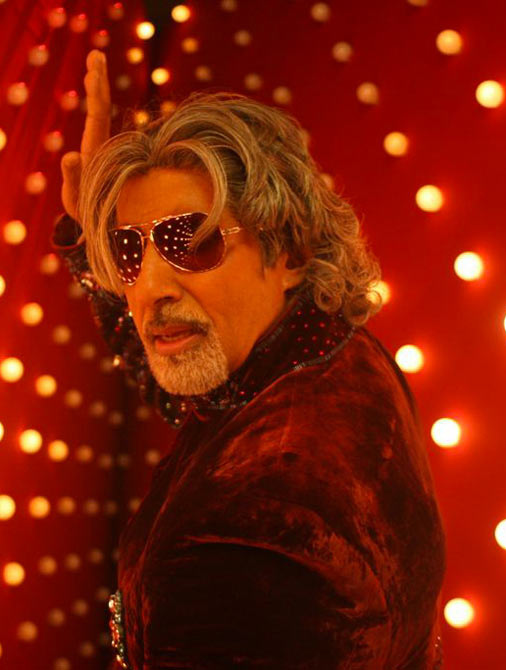 AB settles for over-the-top flamboyance in velvet and zardozi with a mop of curly locks in place to play an eager-to-please genie in this lukewarm take on the popular Arabian fantasy. 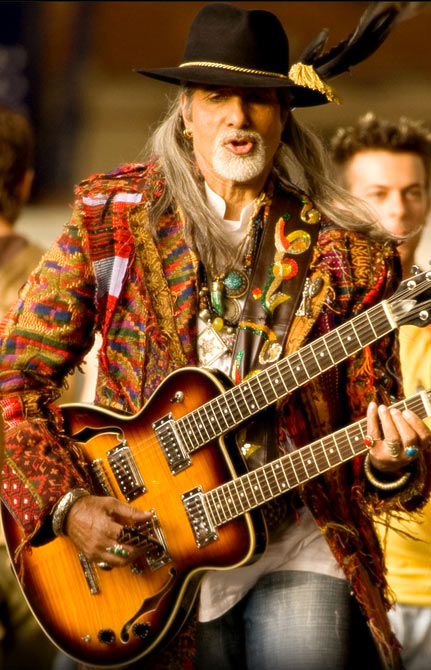 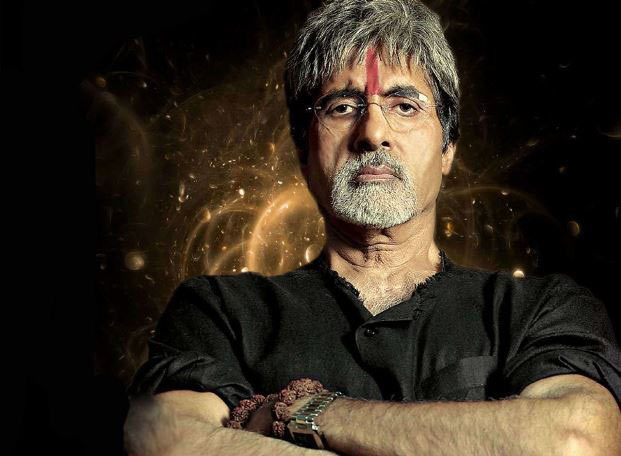 Modeled around an influential politician, Bachchan lends unmistakable starkness to the self-styled Sarkar in Ram Gopal Varma’s film of the same name. 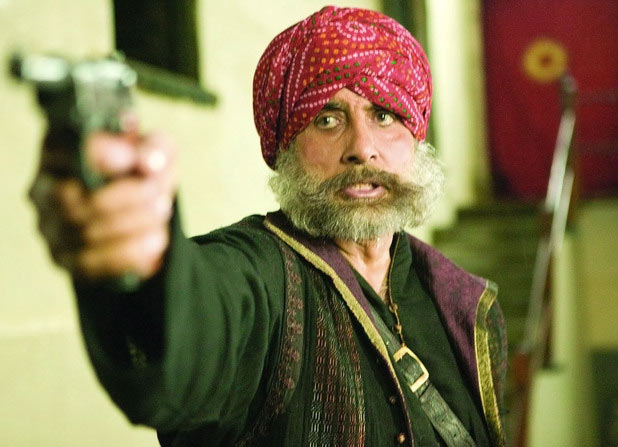 One of his most effective performances in the recent phase of his career, AB hits a stunning traditional note to play the loyal defender of a royal family in and as Eklavya. 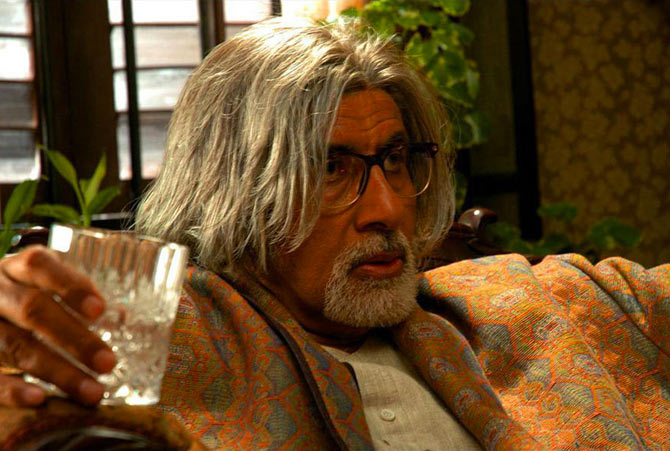 As the theatre actor consumed by Shakespeare, Bachchan SR recognises and conveys the whims and instincts of an artistic intellectual in words and wardrobe. 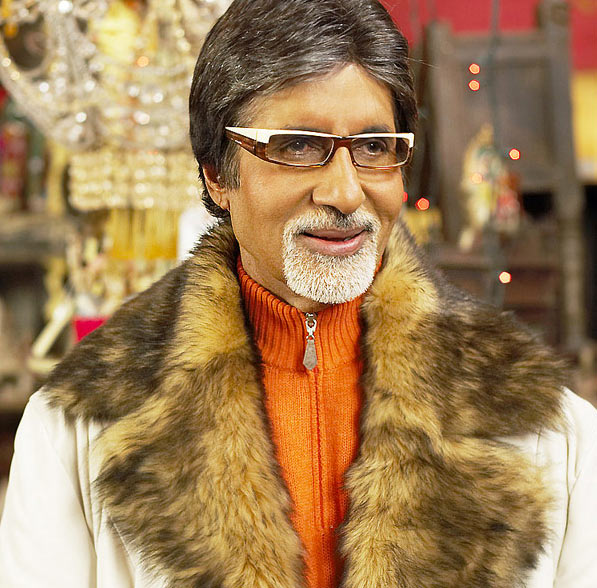 Flamboyance thy name is Sexy Sam. AB’s quirky fashion sense in Kabhi Alvida Na Kehna could give Sonam Kapoor a run for her wardrobe. 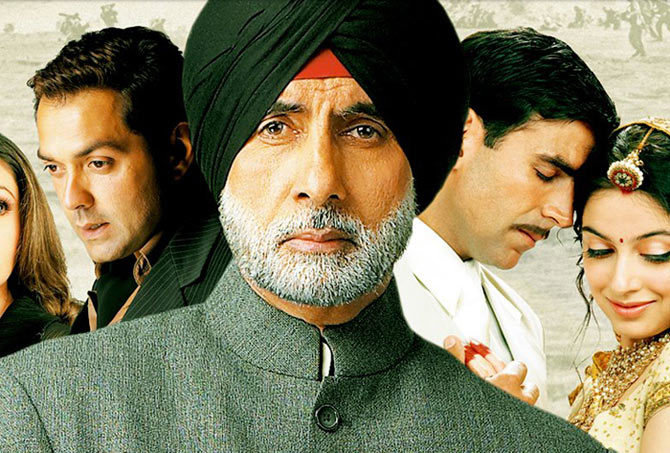 Every Bollywood actor dons the pagdi to play a Sikh character at some point in his career. As does AB in the little remembered, Ab Tumhare Hawale Watan Saathiyo. 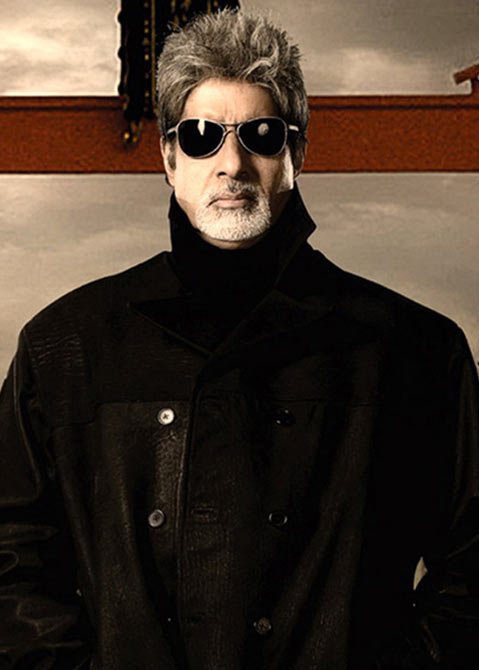 Big B sports slick platinum streaks in this all style no substance Man on Fire rip-off co-starring Arjun Rampal. 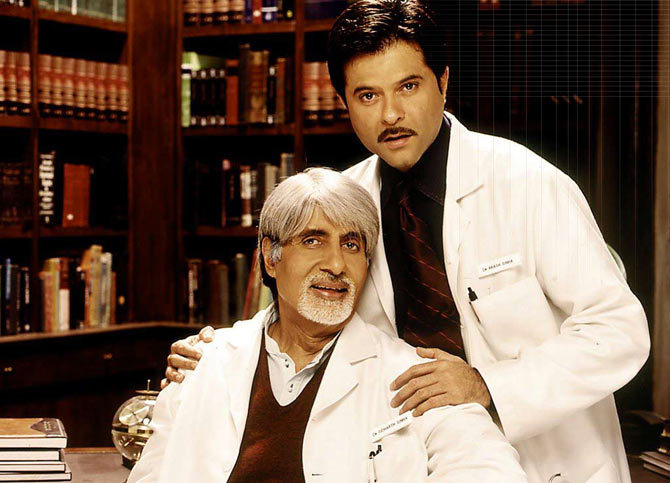 Thanks to Preity Zinta’s fierce bangs to AB’s blindingly white rug, Armaan is poised to go down in history as the movie with the most cringe-worthy hairpieces. 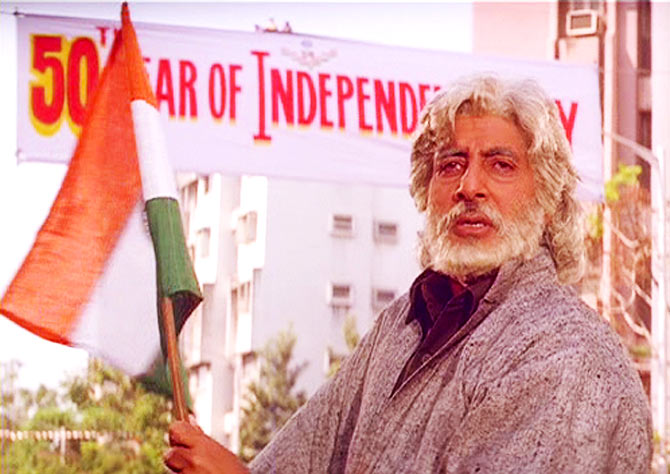 At one point, he’s wearing a moustache that aims to compete with Nathulal. On another, he’s turned into a modern-day Bheeshma. 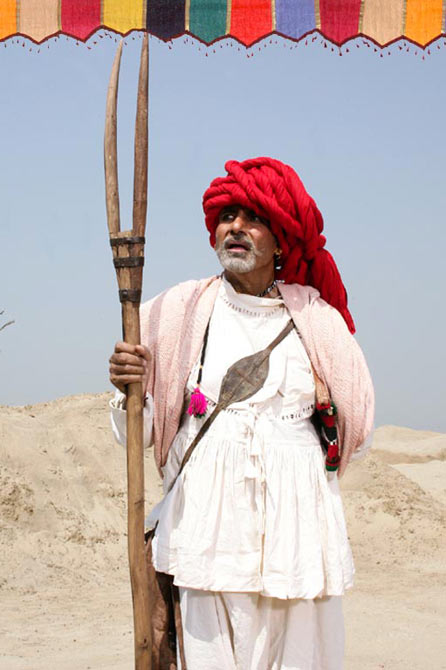 Bachchan looks every bit of a local in typical Rajastani attire for his climatic cameo in Amol Palekar’s Paheli.

Other than playing almighty in Hello Brother and God Tussi Great Ho star, AB hits the divine note rather significantly as the bearded Indra of Agni Varsha. 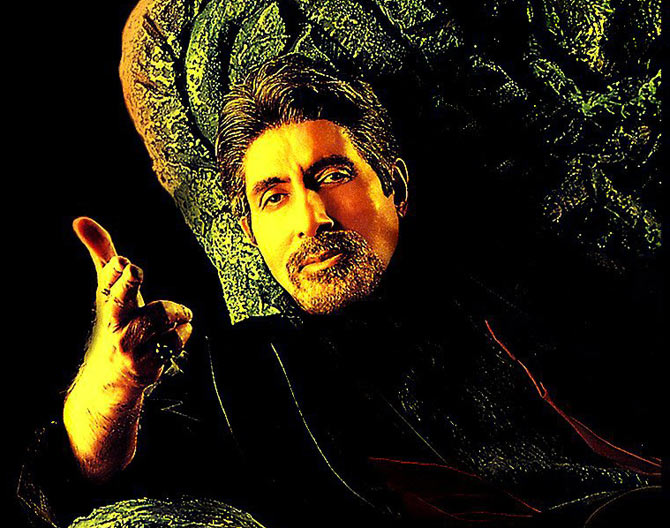 In the dark enigmatic ambiance of Aks, Amitabh Bachchan puts on a dark, mysterious and volatile face of mischief. 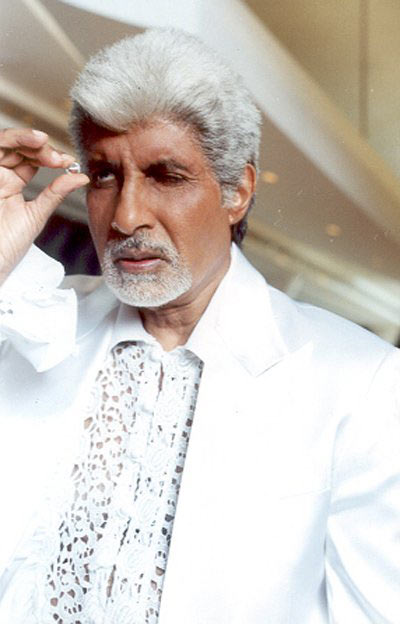 Boom may be a sore spot in his career but his all-white wacky appearance aims to distract us from the obvious. 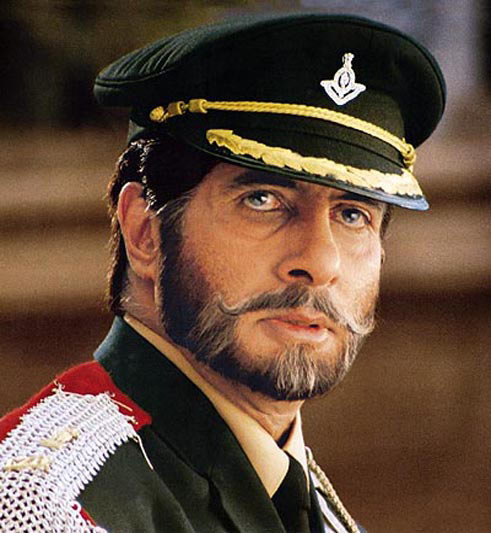 While many debated on the 'armyman sporting beard' aspect, fans couldn’t care less as Major Saab Sona Sona-ed his way to the bank. 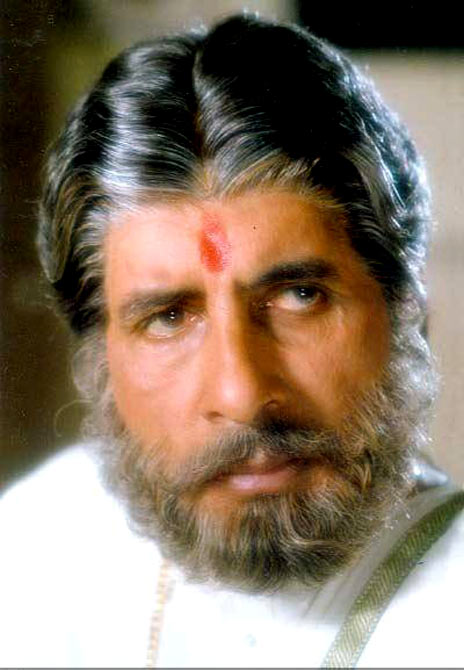 AB plays the stern-faced conservative patriarch to himself with the complete paraphernalia -- dhoti, kurta, mooch, dadi, tilak -- in Sooryavansham. 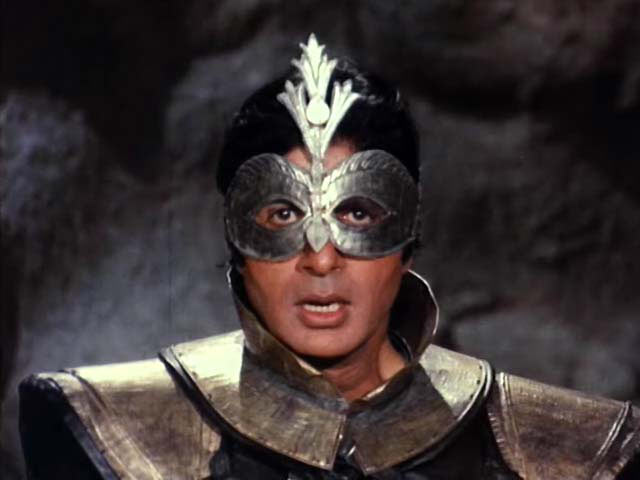 Shashi Kapoor’s superhero fantasy tanked at the box-office but Amitabh Bachchan’s peculiar get-up in and as Ajooba still lingers in memory. 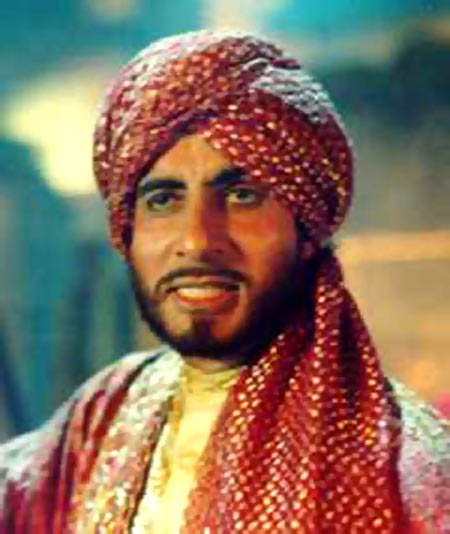 As the Afghani pathan who keeps his word at the expense of his family, AB nails it quite nicely in both the performance and costume department. 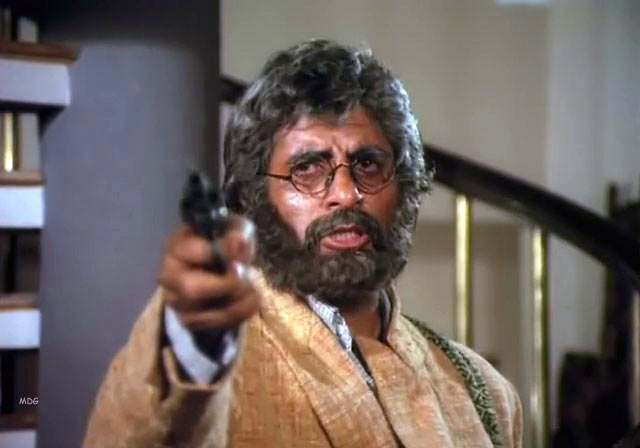 Amitabh Bachchan goes on a vendetta spree as well as stops his father from taking the law in his own hands in the father-son double role drama, Aakhri Raasta with lot more than cosmetic distinctions to tell them apart. 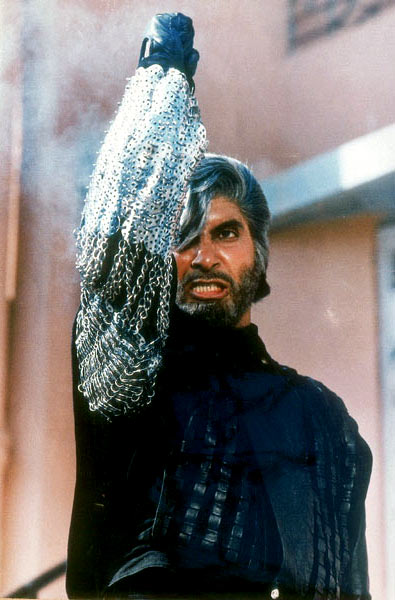 It’s the *baap* of all looks -- the chain arm, the leather suit, the flappy salt-pepper hairdo. How to do a drag act and enjoy it too? Watch and learn from a no-holds barred Bachchan during the Mere Angne Mein jig of Laawaris. 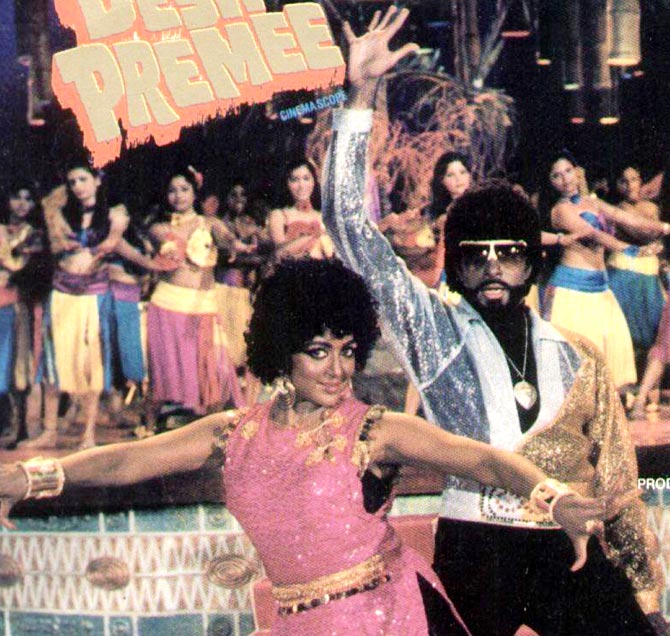 Quite a few to choose from -- the tribute to Gumnaam’s Mehmood, the bespectacled revolutionary and, of course, the inappropriate but hilarious painted turned as 'Gore Nahi Hum Kaale Sahi.' 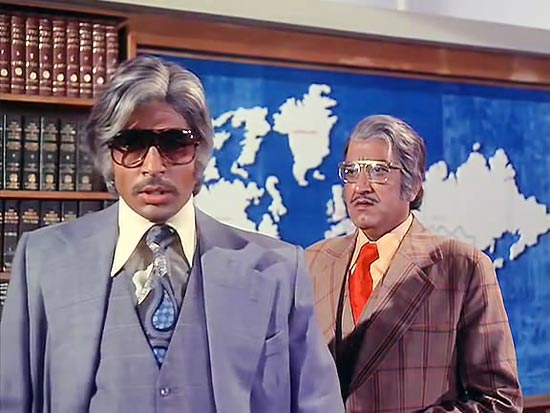 Trust AB to keep a straight face while looking like that wearing that wig to pull off yet another double role scenario. 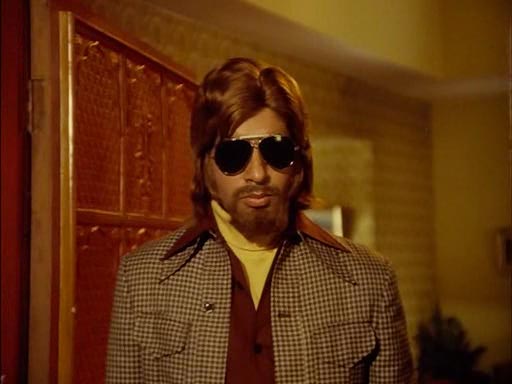 For one of its on-duty investigation scenes that ends up in romancing Neetu Singh instead, Bachchan plays a cop who dresses up as a foreigner with auburn hair and beard. Image: Amitabh Bachchan in Do Anjaane

Bollywood is still hung up on this laughable notion that a beard is all an actor needs to make him virtually unrecognisable to the world. So while Rekha remains clueless, the viewer knows its AB all along. 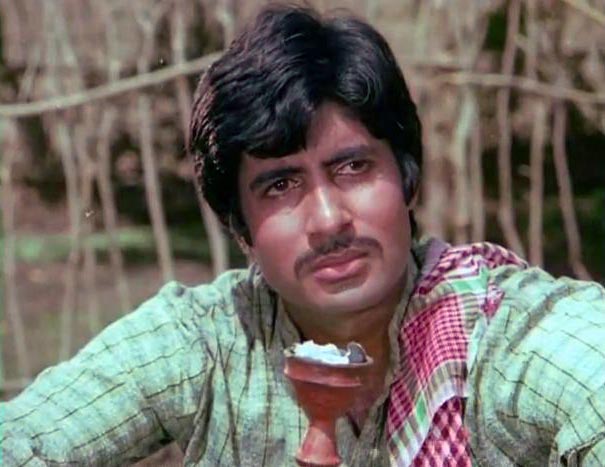 Bachchan plays a self-centered jaggery trader of a rural town who pays heavily for holding beauty over brains in the parable Saudagar. 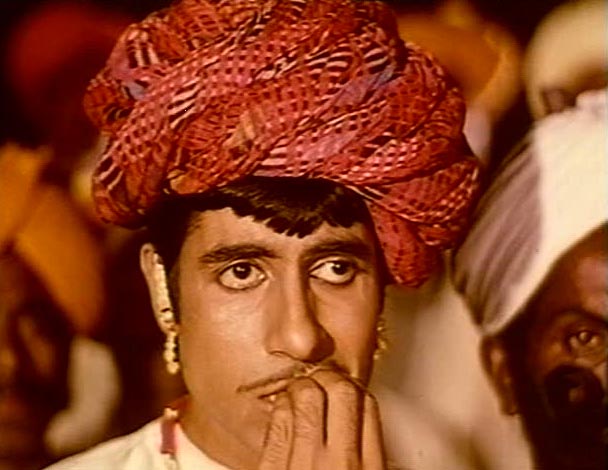 Long before Paheli, AB earned laurels for his work as a mute Rajasthani lad in the tragic romance, Reshma Aur Shera.