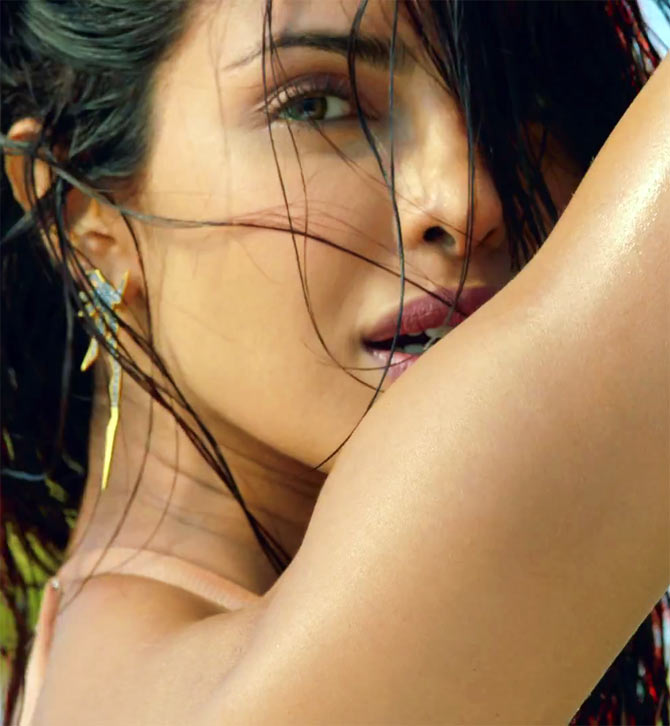 Image: Priyanka Chopra in a video for her single, Exotic.
Sonil Dedhia

'I have performance fear.'

'Every time I walk onto the sets and before giving the first shot, I feel physical fear within me.'

Priyanka Chopra gets candid about her work, her movies and the Gunday in her life.

From being Miss World, to acting in films and being a singer, Priyanka Chopra has gone from strength to strength, being successful at whatever she has done.

Despite all the fame that she enjoys, the 31-year-old actress doesn't mind admitting that she has her fears and there could come a time when she could get bored of acting.

In this exclusive interview with Rediff.com's Sonil Dedhia, Priyanka talks about Gunday, being wooed by two guys at the same time, and how she overcomes her deepest fears.

You shot a video for your new single in Los Angeles last month. How was the experience?

It was a great experience. I am really excited about my next single. I am also nervous because it's my first solo single.

It should be released by early April. The video is different from what I have done earlier.

The song is a cover of I Can't Make You Love Me by Bonnie Raitt.

It felt appropriate to make this my first solo single as it was the reason why I became a singer.

This song for me is captivating and I have spun it on its head and made it into a dance track.

'All three of us are about the same age, but I have done more work than both of them combined' 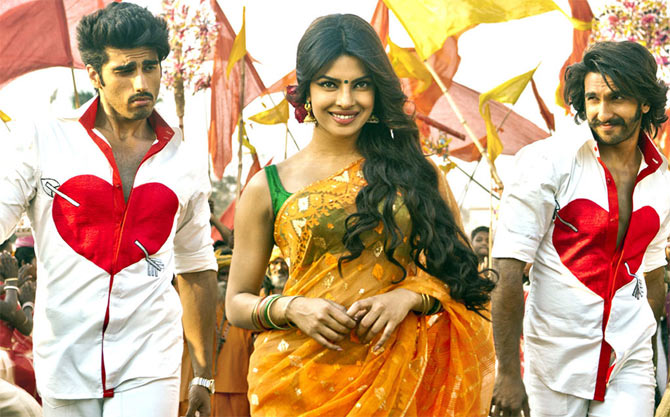 You are working with two relative newcomers, Ranveer Singh and Arjun Kapoor, in Gunday. What did you learn from them?

All three of us are about the same age, but I have done more work than both of them combined.

I can't help it if they started so late. (Laughs)

One thing that I learnt from both of them is that when you are new to the industry, you tend to magnify things and you focus on every little detail. That really helps your performance.

Both Ranveer and Arjun are phenomenal actors and we had a lot of fun shooting for the film.

Who was a bigger gunda -- Arjun or Ranveer?

Me! I am a big bully and I enjoyed bullying men.

Jokes apart, we became really good friends. I've known Arjun a long time. He was an assistant director on Salaam-e-Ishq.

He was really huge at that time; I guess he used to weigh 140 kg. We had our own secrets and would hang around quite often.

I came to know Ranveer through Gunday and I enjoy working with him too.

'Girls don't like two people at the same time' 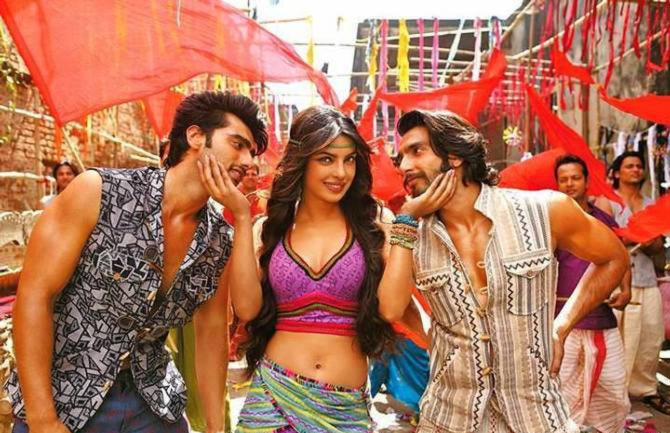 How do you see the transition in Arjun Kapoor?

I knew he always wanted to be an actor, so it didn't surprise me when he started acting. But I knew him as this obese guy who couldn't walk without breathing heavy.

From there to having six pack abs!

He is a perfect example for everyone out there who is obese and says that we cannot change anything. It is really inspiring.

Have you ever been in a situation in your life when two men have vied for your attention at the same time?

Yes, many times. Ultimately I pick the guy I like.

The thing is, guys always have to live up to the girl, as eventually it's her prerogative.

Girls don't like two people at the same time.

How can you say that?

I think it's not in our DNA. I think a girl's attention just goes to one person.

Hypothetically, if those two men were Ranveer and Arjun, who would you chose?

I don't see the two of them romantically, so when I am getting two why should I pick one? (Laughs)

'Kolkata is lost in time' 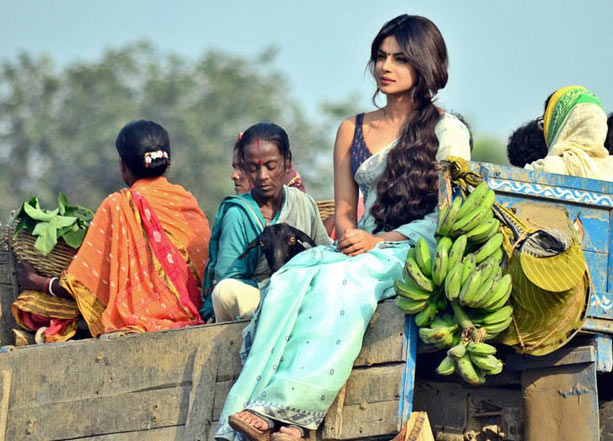 Gunday was shot in Kolkata, as was your earlier film Barfi! Can you share your experiences of the city?

When we go for a shoot, we don't really observe the city. For me Kolkata is a lot about visuals and smells.

When we left for shoots early in the morning, I enjoyed looking at the architecture of the city.

The people of Kolkata are deeply rooted in their culture. It is a city lost in time.

Did you try out the local food?

The mach was doing jhol (referring to the popular Bengali dish Macher Jhol) to me every night!

'My mother inspired my clothes in the film' 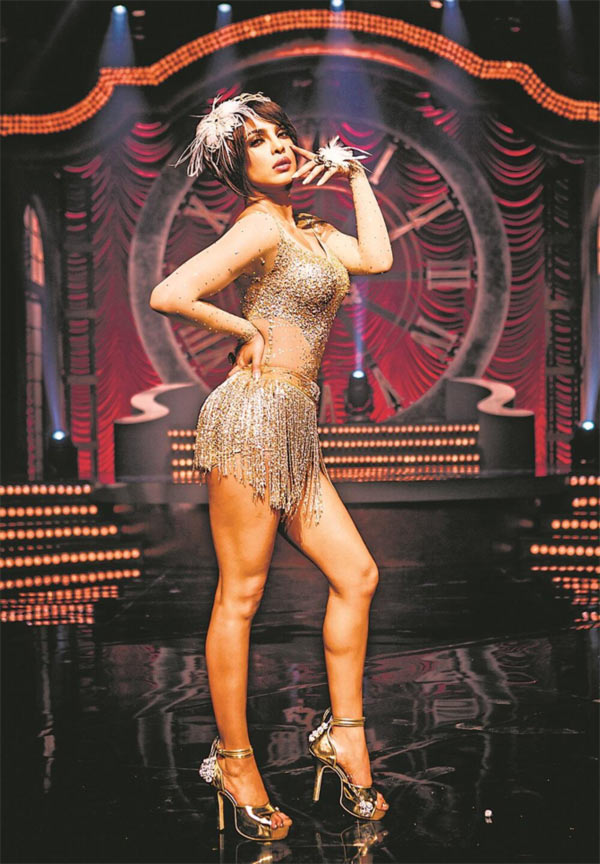 You play a cabaret dancer in the film. Which is your all-time favourite cabaret in a Hindi film?

Did you take any inspiration from Helen?

We did not want to make it Indian cabaret because Helen ma'am has done a great job with cabaret and I don't think we can match that. No one can step into her shoes.

Our cabaret is more European style. The film is set in the 1970s and during that time a lot of Anglo-Indian girls came from Europe to perform cabarets in Kolkata.

My mother inspired my clothes in the film. The big bindi, curly hair and the saris are similar to what she wore.

'I sleep only for four hours in a day' 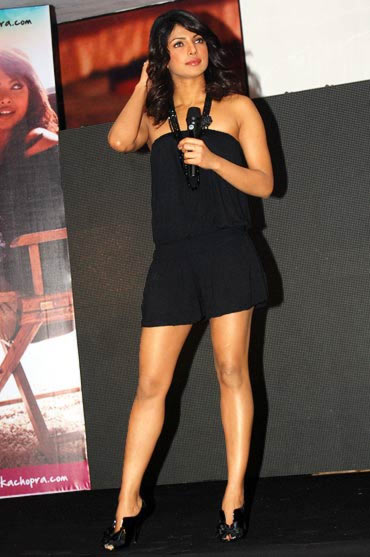 In a recent interview you mentioned that you work really hard and live a very hectic life. How do you make time for your friends?

My friends say I am non-existent in their lives. I love what I do. My work is my worship and it gives me a high.

I sleep only for four hours in a day. I think sleeping is for the weak (laughs).

I do take out time for my friends whenever I can. It has become a little hectic since I am handling two careers at the same time. There are times when my family and friends travel with me.

My father was. I depended on him for everything. He was very protective of me.

I think he was really proud of all my achievements. Now my mother has taken over that role.

'I am extremely unpredictable' 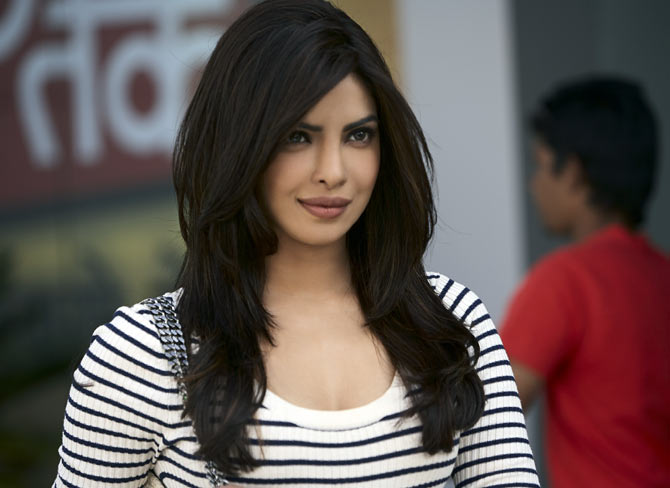 I read somewhere that you have attention deficit disorder. You tend to get bored of things easily. Could there come a time when you get bored of acting?

Yes, it could be that I get bored of acting. It hasn't happened yet.

I still have a huge fascination for acting. I am extremely unpredictable. That is why I do so many different characters.

It is very easy to be the safe heroine, who does films which have the usual songs and scenes. But I want to be able to make my own path.

My next film is always different from what I have done before. I like to play strong characters.

Is that the reason why you did films like Fashion, 7 Khoon Maaf and Mary Kom?

I don't think so much when I take up a film.

I have a pivotal role in Gunday. It is because of my character that everything happens in the film.

It is completely different from my last film (Krrish 3) which was a mainstream commercial blockbuster.

I do like to play different characters and even if the character is similar to the one I played earlier, I try and make it different by changing the look or adding some nuances.

At the same time, you also end up doing a small role in a film like Krrish 3.

You have to do those films also. I don't know why other actresses don't get questioned when they do a 10-minute role in big blockbuster movies.

Maybe people expect more from me.

I personally enjoy watching masala Hindi films that are full of action, herogiri and glamorous heroines.

'I don't know what it is not to be famous' 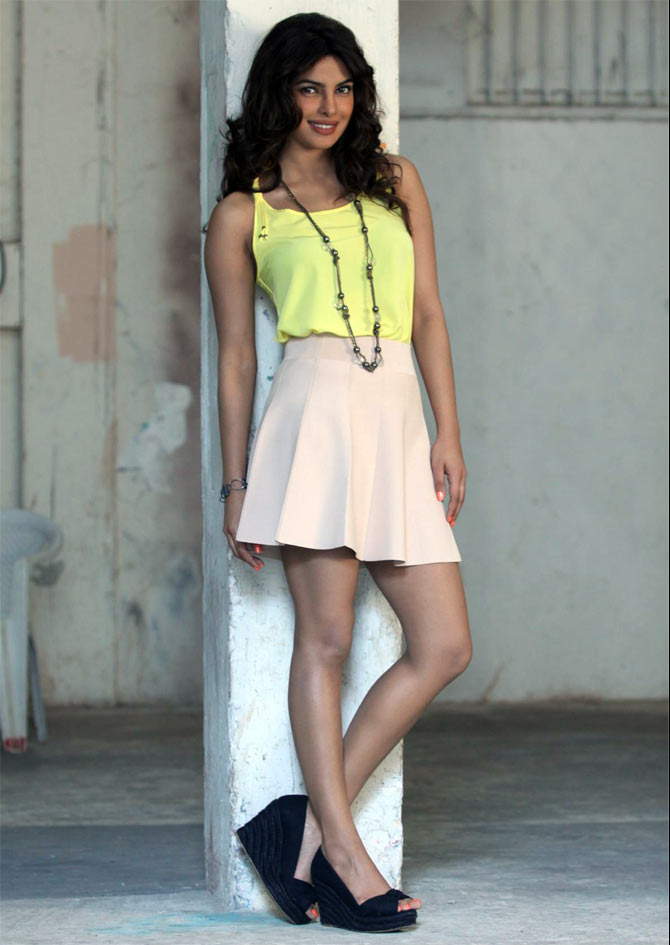 Many women envy you for what you have. You are famous and have a great career. How do you look at yourself?

I have been in the limelight now for more than half my life.

I don't know what it is not to be famous.

I never see myself as Priyanka Chopra, the star. That fascination went away long ago. Today, what is important for me is my work.

Whether it is music, acting or endorsements, I want to create my personality around it.

I feel extremely proud of the support and love that I receive from my fans across the world. I feel my fans are like my family.

I look at myself as just another girl who loves to listen to music, go out for dinner with friends, or go to a bookstore and buy a trolley full of books, or squeal when I see an Apple store.

Being in the limelight comes with a price. How do you react to the rumours about you?

There is a price you pay for everything in your life and being a public person means giving up your privacy.

When true things are written, I read it and say 'Oh ho, pakdi gayi'. But when it's not true and people pass their own judgments, I feel it's wrong to do that.

'I Google my name all the time' 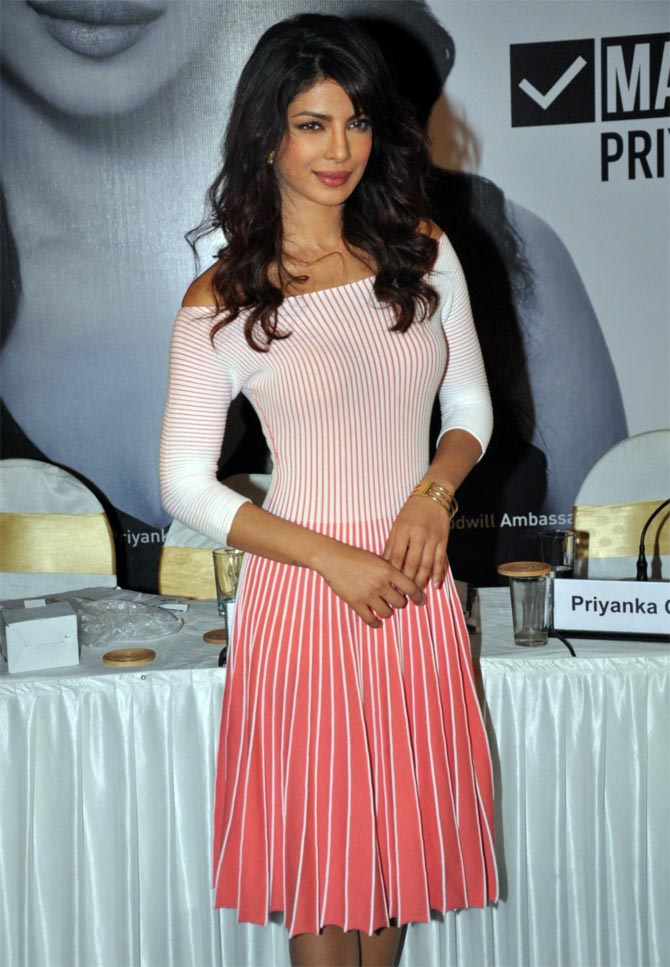 How often do you Google your name?

I Google my name all the time. I want to know what people are writing about me.

It really entertains me when dumb stories get published and at the same time it fascinates me, the source of that dumb story.

What are your biggest fears?

I have performance fear.

Every time I walk onto the sets and before giving the first shot, I feel physical fear within me.

There are physical manifestations of my fear. I feel sick and there are times when I feel I won't be able to breathe.

I feel the same way when I am going to perform on stage.

My biggest fear is losing the people I love.

How do you overcome that?

I just calm myself down and focus on the task at hand.

I tell myself that even if I make a mistake, I will cover it up in the next attempt. I try and make myself feel comfortable.

Is there anything that you would like to be better at?

I compete with myself and would like to do everything perfectly. I try and evolve constantly.

There are so many things that I will need two lifetimes to do them!