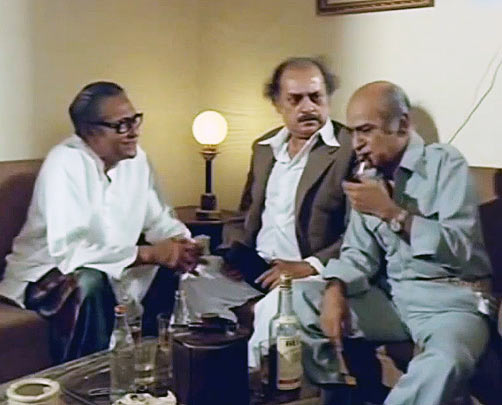 In our special series re-visiting great Hindi film classics, we look back at Ashok Kumar, Utpal Dutt and A K Hangal starrer Shaukeen (1982).

Of all the moments in The Lunchbox that stayed with me the most is the one when Irrfan Khan states, “I don’t know when I became old.”

His words are simple, genuine and pinching.

Truly, does anyone ever?

But the appeal of youth is so overpowering, people cling to it with dramatic, almost desperate inclination. Some associate youth with looks, some with ambition, others with fun. Ageing seems too close to the end.

Basu Chatterjee’s aptly named Shaukeen plays on this psychology in a light-hearted fashion through the comical adventures of three incorrigible old-timers seeking ‘action’ on a strategically planned holiday to Goa.

Be it Rajnigandha, Chhoti Si Baat, Baaton Baaton Mein or Chameli Ki Shaadi, Chatterjee’s informal storytelling about whimsical characters is what makes his films so enjoyable and noteworthy.

His 1982 comedy, Shaukeen, based on Samaresh Basu’s story, takes a similar approach through an understated depiction of what would otherwise emerge into world-class embarrassment under typical Bollywood treatment.

Shaukeen’s greatest assets, it goes without saying, are its three leading men played by Ashok Kumar, Utpal Dutt and A K Hangal. The troika’s individual idiosyncrasies coupled with a transparent chemistry works like a dream. They are best friends -- yaars -- as one says in Hindi, who’ve got, years and years of bonding and clinking whisky glasses behind them.

With age follow health issues, anxieties and a need for companionship; the Shaukeen men frown at the inevitability that robs them of its favourite fixations, “Kya zulm hai? Jin jin cheezon se zindagi zindagi lagti hai kambakth Doctor ussi ko cheen lete hain” or envy the young heroes (Jeetendra, it doesn’t get more symbolic than this) their date marvels at while watching a movie fittingly titled Waqt Ki Deewar and cringe every time an attractive young woman addresses them as ‘Uncle.’ 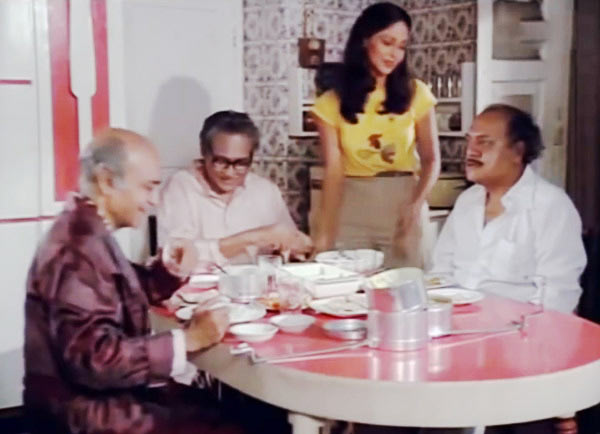 A playful voiceover introduces us to the three affluent gentlemen, who’ve crossed 60.

There’s Om Prakash Chaudhary (Ashok Kumar), a building contractor who spends most of his time following a healthy diet, getting massages, touching up his grey strands with a kajal pencil, dancing to pop singles and checking out hot girls in the neighbourhood. His wife doesn’t share his sunny temperament and is occupied with her numerous pilgrimage trips.

Again, a healthy, wealthy travel agency owner, he’s even changed his name to Anderson simply because it sounds more cool. He lost his wife only a year ago but if his manner of flirting with the pretty secretary is any indication, he’s no longer in mourning. Watch him turn the reddest shade of beetroot every time someone humours him with the classic compliment, “Arre, aap toh sirf chalees ke lagte hain.”

Finally, we meet the traditionalist, god-fearing Jagdish Bhai (Utpal Dutt), a well-heeled property holder eyeing one of his single, attractive tenants. His wife passed away a decade earlier and he’s the most coarse talking of the three. 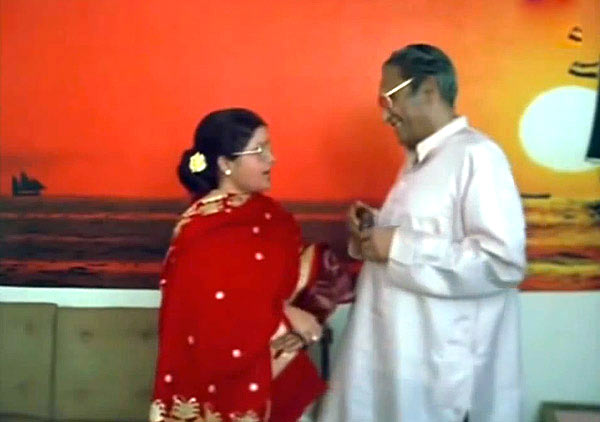 One evening the friends meet at Om’s house over drinks and candid confessions (“Koi bhi jawaan ladki achi lagti hai!”) expressing a need to get laid in not so many words.

Their resolution to do something about it is intensified after Om recalls an incident when during a work trip to Nasik, he encountered a ‘massage’ provision from a young woman at a Dak Bangla but was too uncomfortable to go ahead with it.

Om, Inder, Jagdish decide to take a trip to Nashik and hire a temporary driver Sakharam (Mithun Chakraborty) who persuades them to change the destination to Goa instead.

After all, “murda jannat jaaye ya dozakh,” reasons Jagdish. It’s the sort of enthusiasm and aspiration one would expect from Chashme Buddoor’s shikaar-obsessed Omi and Jai.

Sakharam has some free time between a job interview and this getaway in Goa lends him the perfect opportunity to hang out with girlfriend Anita (Rati Agnihotri), a hotel singer.

Shaukeen is devoid of raunchy intimacy 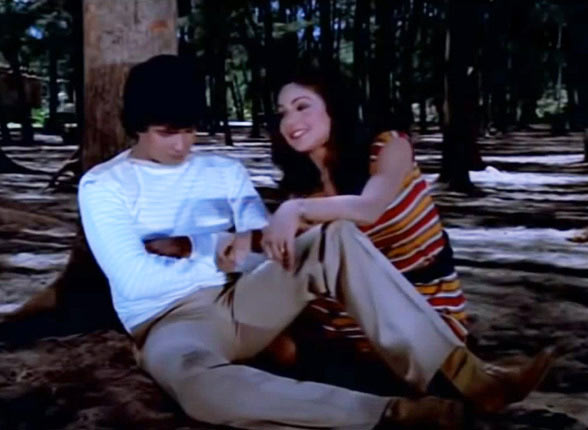 Instantly taken in by free-spirited Anita’s good looks and bohemian ways, the sexagenarian party mistakes her to be the ‘provisional’ attraction of the new Dak Bangla.

After squabbling over her attention like schoolboys, the three decide to pursue her in turns to hilarious results.

The wacky beach sequence will tickle your bones.

At one point, things get uproarious between a resisting Ashok Kumar and persuasive Rati Agnihotri.

What’s even funnier is when he tries to play gallant and lift his pretending-to-be-unconscious lady.

Though dubbed a sex comedy, Shaukeen is devoid of any raunchy intimacy or iffy innuendoes. What transpires between them and her individually and what each reveals -- both the exaggeration and the truth is the essence of Shaukeen and its bittersweet realisation, which evokes pity for its foolish but, ultimately, harmless protagonists.

If Anita sees through their intentions and deliberately exploits their weakness to her advantage, it isn’t spelled out but Sakharam’s uneasiness at his girlfriend’s insistence on entertaining the three is frequently stressed on.

The surprise package of Shaukeen 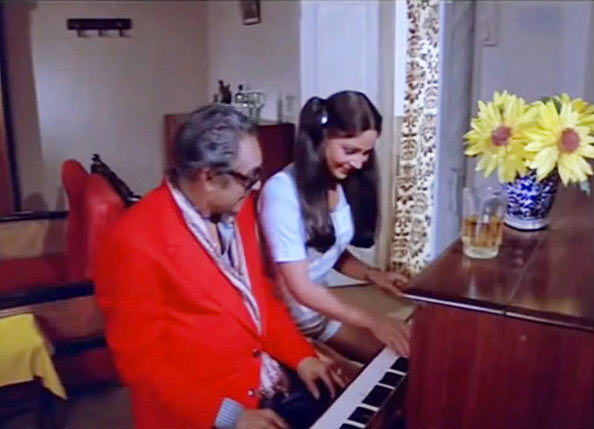 Fresh from the success of Ek Duuje Ke Liye, Rati Agnihotri looks visibly chuffed to be in such exalted, experienced company.

Her exuberance and Shaukeen’s clever writing ensures there’s nothing distasteful or queasy about her interactions with her sex-starved admirers.

Mithunda (his smash hit Disco Dancer released the same year) provides charming support but like I said before, Shaukeen’s real heroes are Ashok Kumar, Utpal Dutt and A K Hangal.

A salacious Hangal in the garb of a sophisticated Indersen/Anderson is quite easily the surprise package of Shaukeen.

The late supporting character breaks out from the baggage of trembling, weepy, victimised father roles to display his comfort in comedy. Often his sheepish smile speaks more than words.

Utpal Dutt perfectly captures the crabby eagerness of his role since he’s been flying solo the longest.

Though low on likeability, he balances the contrasts doled out by his friends. One gets a sense age hasn’t entirely mellowed his bad boy streak. 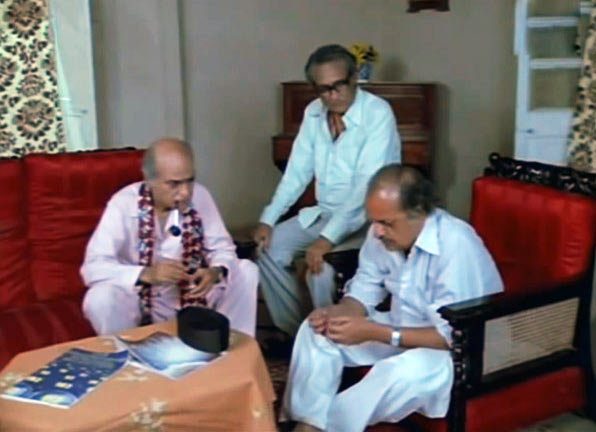 His amusing dance alone is worth the price of admission and the amazing quickness with which he covers up his indiscretions wherein “high neck” becomes “aainak” on encountering the missus. His frothy performance sets the entire tone of Shaukeen.

Clad in a classic silk kurta, printed lungi, one of the film’s most enduring images in my mind is of him looking out through his balcony for eye-catching glimpses with Kishore Kumar’s glorious rendition of Jab Bhi Koi Kangna Bole playing in the backdrop.

The mortification he struggles to conceal after feigning ignorance about his neighbour (Jayshree T) till she points out, “Aap dekhte toh rehte hain hamesha” is hilarious.

Inspired by his father Sachin Dev’s Bangla number, Nitol paye rinik jhinik, Rahul Dev Burman’s reworking is infectiously upbeat and richly used in the movie. It’s also one of my all time favourites from his oeuvre. Yogesh’s playful words in Jab Bhi Koi Kangna resonate perfectly on every occasion but the rest of the soundtrack is nowhere as charismatic.

What Shaukeen achieved in 1980s is quite exceptional. Beyond the bungled adventurous of three old men trying to score and, perhaps, validate their warped idea of manhood, there’s also an on-going theme of letting go, embracing age with grace and generosity.

Will its upcoming remake by Abhishek Sharma starring Anupam Kher, Paresh Rawal, Annu Kapoor, Akshay Kumar and Lisa Haydon maintain that thin line between naughty and sleazy? Previous attempts at tackling classics have led me to be skeptical but its original creator Basu Chatterjee believes either do it right or “face the music.”

And it certainly wont be the ‘machal machal’ kind.