The illusion of Spider-Man's amazing life 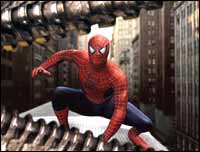 That night we decided to walk home. The weather was perfect for it -- a clear night with a full moon. We turned into Christie Street, where we have been living for almost a year now. We knew right away that something was wrong. It was nearing midnight but the street was as bright as day. As we walked further down the block, we saw what it was.

The longest crane I have ever seen held up a panel of blinding white spotlights. The spots shone on the façade of a building we had passed many times without a second look.

If you imagine the quintessential New York building -- a brownstone with a black metal fire exit -- you will know what I mean.

Well, and here's the thing, this building, a block away from where I live, had been turned into the home of Peter Parker aka Spider-Man.

"Come on up, we like it when people stop and watch," said Joan Atwood, the design manager of the movie Spider-Man 2.

She stood by a group of tents lined up on the sidewalk. There were cartons piled with lighting equipment and unidentifiable piles of building materials or props.

On the other side of the road, vintage American cars like a Buick Roadmaster, a Ford Mustang, a Chevy Impala, and a Cadillac were parked nose to nose. Each of them had an actor in the driver's seat.

The street had been closed to public transport. Yellow cabs were strewn around in a carelessly systematic manner.

The director and his core group of assistants, Joan told me, were seated on the neck of another crane. They were taking shots of the building's exterior. 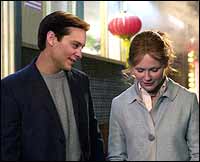 This is Hollywood, I thought. This is the way perfection is achieved in the world's leading cinema industry.

And all this was happening on Chrystie Street, my street. I was a part of this, in however small or inconsequential a way.

The next day, I went to work at an office on West 24th Street, hoping to tell somebody about what I had seen. The first person I met was Jose, the building super. Before I could say anything, I saw in his eyes the kind of gleam he reserved only for special occasions.

I figured he had something rapturous to say. And so he did.

"You know who's going to be using our building to shoot a movie?" he asked, as if I would know.

For the next week, my colleagues and I learnt more things about filmmaking than any MTV documentary could have told us.

First, we realised that it took hundreds of people to put a scene together. Second, people from LA are not undesirable aliens but friendly and given not just to a talk but a pretty darn long chat.

Third oh never mind, let me get to the point of this.

There is a scene in the movie which goes something like this: Peter Parker is trying to jump from one building to the next with a patented Spidey leap. Except that he doesn't quite make it. His web powers fail him and he comes crashing down through a tangle of clotheslines strung between the buildings.

I saw the clotheslines. I saw what it took to create that illusion of Spider-Man's amazing life.

And the place where all of this happens -- that's my city. New York.

This feature first appeared in the May 23, 2003 issue of India Abroad, the largest circulated newspaper for the Indian-American community, which is owned by rediff.com