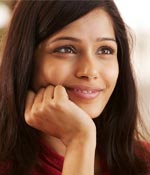 The lilting texture of Leon Redbone singing, 'When you wish upon a star, makes no difference who you are, anything your heart desires will come to you...' opens the black and white credits of You Will Meet a Tall Dark Stranger. Only this is not Walt Disney, it's Woody Allen.

Therefore, unlike Pinocchio, the protagonists of this film may or may not get their wish granted and even if they do, it might not exactly be in a class of conventional fairy-tales. Come to think of it, despite the uncertainty and cynicism, You Will Meet..., with its chatty, disgruntled, delusional group of characters, could very well be a quirky animated movie.

But it's not. It's a live-action, half-hearted albeit harmless comedy based in London (also the setting for Match Point and Scoop) wherein a bunch of actors with Australian, Indian, American, Spanish, Welsh and English upbringing dish out a mezze of accents.

Distraught with divorce, Helena is addicted to the predictions of her fortune-teller acquaintance Cristal (Pauline Collins). The woman is vain, hysterical, hates the idea of post-60 singlehood and is hoping to find a worthy (read equally loony) companion ASAP. She's mildly disapproving of Roy, her struggling novelist son-in-law as he's unable to deliver a worthy follow-up to his seemingly fluke first success. As a result he cannot raise a family with his increasingly frustrated wife Sally, an art agent who is secretly attracted to her rich, handsome boss, Greg.

Banderas doesn't have to do much except look dashing and disinterested, he delivers the goods, no surprise, effortlessly. It is Watts, however, who breathes layers and vulnerability in Sally, perhaps the script's most underdeveloped role with the maximum potential.

Meanwhile, a disheveled, shabby Roy finds a crimson-clad distraction in Dia. Their rushed (and forced) connection leads her to having second thoughts about the man she's on the verge of marrying, a prospect that doesn't go down well with her father (played by Anupam Kher in an inconsequential bit role). You wonder what brings about this unlikely liaison given that Roy's neither a charmer nor a talker. Luckily, Freida is.

Despite Brolin's complete lack of charisma and the rather dense nature of Dia's actions, the Slumdog Millionaire star pitches in enough vivacity and ebullience to give their interactions some credibility.

On the side, Allen concocts the most contrived sub-plot of them all -- the Alfie-Charmaine section. He's the rich, old, Viagra-popping cucumber aching to father a son. She's the young blonde floozy he picked from the street with a fixed raunchy expression, gaudy dressing sense and constant roving eye. Considering Punch essays this inelegance in the blandest possible manner, it's easier to make sense of the discomfort weighing down Hopkins' demeanour.

Ultimately it's Helena's foolhardy obsession with cosmic interventions that provides You Will Meet a Tall Dark Stranger with its theme, title and turbulence. The whole preposterous idea rests on the frail shoulders and dazzling perceptiveness of an utterly delightful Gemma Jones walking in and out of a scene with an air of quizzical, magical, loquacious conviction that is Woody Allen, which compels you to play along. Like the voiceover by Zak Orth sums it up, 'Sometimes the illusions work better than the medicine.' 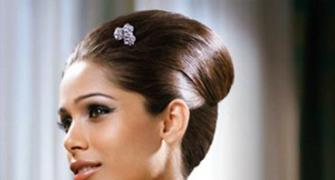 Why Freida Pinto won't do a Bollywood film 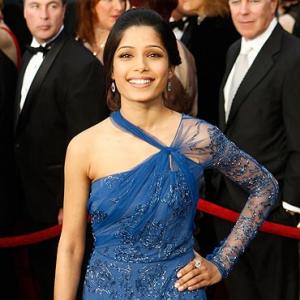 'Nobody recognized me in Mumbai slums'