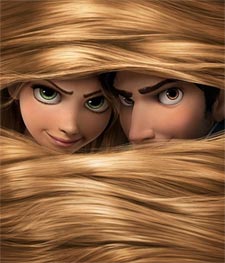 Only the animation studio's newest princess, under Nathan Greno and Byron Howard's collective direction, blends this dual ambition with such infectious zest, the aforesaid skepticism is wiped off within seconds.

Often we dub a movie or character cute, without so much as a thought, because it's the easiest and commonly tossed adjectives around. Tangled, in fact, is one. To think the story takes inspiration, even if in tiny installments, from Brother Grimm's stark fairy tale, Rapunzel. .

But then modifying tragedy to pitch in sunny optimism is reassuringly Disney. With stunning computer graphics and feel-good elements rocking its zingy menu, Tangled, too, swaps its melancholic origins for on-the-road hijinks between a wide-eyed eloper Rapunzel (Mandy Moore) and her roguishly handsome escort.

After all how long can the poor girl allow a self-seeking witch parading as her syrupy-voiced mommy (who resembles a tauter version of The Corpse Bride, voice of Donna Murphy) to treat her never-ending tresses like some DIY lift service in exchange for some meh soup?

Thus fed up of her daily routine of household chores, painting wall murals and brushing extended strands of golden locks, which act like an anti-ageing device (the kind that actually works), the lady -- armed with her multipurpose hair and a reliable frying pan runs off on a day trip to view a royal display of lanterns sent out by the King and Queen in memory of the Lost Princess.

Guiding her path is Flynn Rider (Zachary Levi), a suave burglar with a smarmy smirk and proverbial golden heart as they engage in a whole caboodle of nutty folk providing this Alan Menken-helmed musical with some more occasions to buzz and boogie.

Though none of the songs in Tangled possess the timelessness of Meken's previous compositions -- A Whole New World or Beauty and the Beast, Mother Knows Best and I've Got a Dream are on the spunky side. But it's the luminous imagery of I See the Light, merging the reach of technology with Menken's sublime melody that produces a spectacular celluloid moment. All the better if viewed in 3D.

Even though you know where this is heading, Tangled has quite a few snazzy moves up its sleeve. Mingling contemporary mannerisms within a medieval backdrop, while never as irreverent as Shrek, upgrades Tangled from a generic fairy tale into a humorous, tangible, fast-paced fantasy.

The comedy, fortunately, isn't restricted to clubbing down an odd-looking bum or unnecessary slapstick. On the contrary, the hilarity ensues from subtle jokes like Flynn's reaction 'They always get my nose wrong' on spotting his portrait on a 'Wanted' flyer.

Furthermore, this is one of those few animated flicks that doesn't go overboard stuffing on vocal talents. Save for Mandy Moore's sprightly rendition of her equally dazzling heroine, Zachary Levi's charming overtures or Donna Murphy's so-silky-it's-almost-creepy interpretation of the youth-obsessed witch, this CGI-crafted wizardry relies on the soundless might of Rapunzel's insightful chameleon and Flynn's super snappish horse. Even fleeting appearances are sparkling with details, especially the enigmatic mime artist and a sloshed, droll cupid.

The courtesy is extended to emotional bits as well. Despondency enveloping the Royal couple is conveyed through a quiet exchange of mutually-understood grief. Even if the packaging is new-school, its heart is sewed in old-fashioned sentimentality that draws an audience of any age.

'The world is dark, selfish and cruel. If it finds even the slightest ray of sunshine, it destroys it,' insists the conniving old witch. Not true, Mother Gothel. Even if it's for a little less than two hours, the sweetness and strength of Tangled compels you to believe that magic prevails not only in ageless beliefs like true love's kiss but even the most dead part of our body.