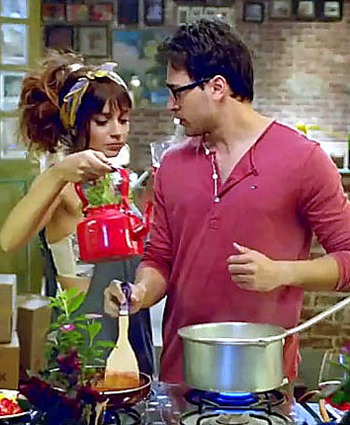 'Katti Batti is an imbecilic, cliche-ridden embarrassment that made me want to punch it in the mouth,' says Raja Sen.

There are some that you fall for instantly, some you keep gazing at despite yourself, some that grow on you, and some who are never quite right.

There are some that have issues, some that look a little underwhelming, some that seem too glossy and superficial, and some that end up too forgettable to talk about.

Nikhil Advani’s Katti Batti is none of these things. It is an imbecilic cliche-ridden embarrassment that made me want to punch it in the mouth.

Because it is that bad, yes, but also because a spurt of blood may just enliven it with something approximating realism -- for this is a romantic drama that, not knowing its place, happens to be executed like horrid, tasteless slapstick.

There are times when this movie is as loud and unbearable as, say, a Grand Masti.

Lead actors Imran Khan and Kangana Ranaut try their darnedest, but let’s face it, Advani and the script never come close to giving them a chance.

She is a wealthy jet-setter who capriciously travels across Europe and moves in with her man on a whim, after which she spends an awful lot of time texting her ex.

He is a morose architect who looks at an old rival, glares and then abruptly breaks down weeping -- after which he sits in a loo and, um, strokes his turtle.

They happen also to be living together. Advani and his writers seem so bewildered by the idea of co-habitation that they appear constantly shocked by it.

The very first shot of the film has Imran lying in bed, neck-deep in aforementioned housing situation, presumably having gotten time to wrap his brain around what is evidently a quantum concept, and yet he starts the film by questioning it.

“Don’t you find all this weird? This ‘live-in relationship…” he trails off, helplessly, as Kangana laughs it off.

This is literally just the beginning, as Katti Batti goes on to verbalise the obvious over and over again.

A scene with two people beating each other up has to be underlined by a third guy pointing to them and saying “Fight! Hey, fight!”, and later one buddy looks another in the eye and reminds him “Main tera best friend hoon.”

Khan, playing the hapless and pathetic protagonist Maddy, gamely embraces the inanity mostly wearing an ironic what-in-the-world-is-this-film expression, which makes him likeable even though the film makes it dashed hard to root for him.

He’s a lovesick phenyl-drinking fool who walks around with a heart-shaped box, incessantly reminiscing about the girl who left him.

Ranaut’s Payal, meanwhile, in a film that uses her more as clotheshorse than performer, switches from look to look with élan, Katti Batti working as a fine showreel for her stylists.

Her big expression, for nine-tenths of the film, is Blue Steel.

The film doesn’t give her anything to do, in fact, until the shamelessly manipulative climax where she does knock it out of the park -- too late for anyone to care, however -- and Khan, to put it politely, struggles with the hardcore histrionics at the very end.

Also, dear filmmakers, we must here interject a plea: do not give Ranaut English words to say unless you direct her into saying them right.

We know she’s a terrific actress and have gotten used to the accent, but here, in a film where she’s supposed to be a bohemian highly-travelled rockstar-pixie, it really, really jars when she pronounces ‘dramatise’ as drummatyze.

Advani’s last film, Hero, released just a week ago, and I decried it for being an unnecessary, mediocre remake.

But that was a lunkheaded actioner and we’re kind of used to those films being daft.

Heartbreak, on the other hand, is rarely this synthetic, this thoughtless, this obvious.

Katti Batti just smells wrong -- and that may well be the most universal dealbreaker of all. 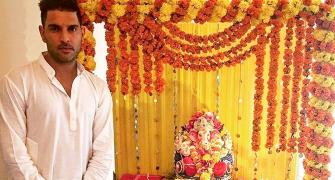