Only the young die good 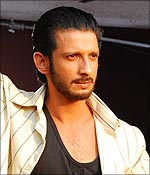 Guns gleam like brand new toys in Allah Ke Banday, held as they are by a strategically young army of muhalla marauders. Strategic not just because child criminals can run faster and mingle into crowds easier, but strategic because it lets director Faruk Kabir pretend that his protagonists, a couple of scumbags, are actual heroes.

They aren't, but Kabir desperately wants you to believe that in his script, a complete tribute to 70s Bollywood. All the standard tropes -- an ailing mother who needs money for an operation; being wrongfully framed for a murder; two brothers, an adopted one hotheaded and impulsive, the other a hero named Vijay -- are all in place, but the treatment is straight out of the Ram Gopal Varma institute.

This makes the film an interesting experiment, taking a plot riddled with vintage melodrama but trying to go edgy with the way it looks. In the process, Kabir's directorial debut initially engages but soon fizzles out, demonstrating just why the films of the 70s and 80s need to be made a certain way, their plots too flabby to run down RGV's streets.

The typical Varma shoot 'em up doesn't waste time on niceties, rushing from setpiece to setpiece hoping that the frantic pacing will help us ignore the plotholes. Kabir, however, evidently believes there is some substance in his story of two young kids who choose to become increasingly hardened gangsters.

He tries to squeeze in all the standard graphs -- emotional, romantic, redemptive and, in the climax, unnecessarily revengeful -- which just slow his film down, tremendously. As do the film's songs  one of which sounds alarmingly like Alanis Morisette's Uninvited -- that come in to underscore the most obvious emotional highs but end up killing the narrative flow.

The film starts off well enough as a pair of kids peddle weed in an exaggeratedly apocalyptic version of Mumbai's slums. Fierce, quick-witted and ambitious, greed gets the better of them and they end up in a juvenile home, where Naseeruddin Shah, as the limping warden, essentially plays Fagin -- albeit one given to sodomy.

The film is, then, a revenge saga: by interval the boys are all grown up, played by Sharman Joshi and Kabir himself, and ready for vengeance. And yet, to its credit, the film steers significantly off course a couple of times, eventually skipping the revenge angle altogether -- except shoving it messily back in at the climax.

The film tries to be 'dark and hard-hitting,' as the blurb on the back of the DVD cover will surely say, but is compromised by poor acting from the support cast and, well, ludicrous writing.

The loud RGV background score just makes things seem spoofy, but Kabir plods on relentlessly, giving his anti-heroes a mostly easy way to the top and giving his audience much to swallow -- including an idealistic schoolteacher who apparently moonlights as a mashaal salesman, and wonderfully informative lines like 'Ashish, tera baap Home Minister hai.' 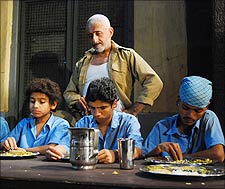 What does work for Allah Ke Banday, though, is an overall earnestness to the proceedings -- the film is pretty watchable for the first hour and then gradually loses steam -- and the performances.

Kabir, hamming it up with enthusiasm, turns out a better actor than a director at least in this first film, and Joshi plays it restrained -- which, we learn, is a misstep in a film thriving on exaggerated stereotypes. Zakir Hussain's not bad, and the kids -- Madhan Deodhar as young Joshi and Varun Bhagwat as young Kabir -- do quite solidly, especially Deodhar, who hands in the film's best performance. All the women -- a mother, a wife and a swiftly pregnant girlfriend -- had no business at all being in the film.

And then there's Naseeruddin Shah in a solid scene, wizened and decrepit and struggling to dip a biscuit in tea. The warden is clearly not the warlord he once was, but then, a dozen years after being fired, why is he still in khaki uniform? Sigh. That detailing keeps letting the film down, when despite some decently written dialogue one scene ago, all is undone when guards wearing new white kurtas are conveniently slaughtered.

So there you have it then, Allah Ke Banday: Prakash Mehra by way of Ram Gopal Varma, but the irresistible protagonists of the former and the deft pacing of the latter are both missing here. The chases are there, but the urgency is an act.

'They don't make 'em like they used to,' and perhaps our young filmmakers should stop considering that line a personal challenge, and instead wonder why. 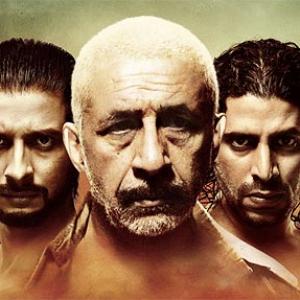 Allah Ke Banday is not a dark movie' 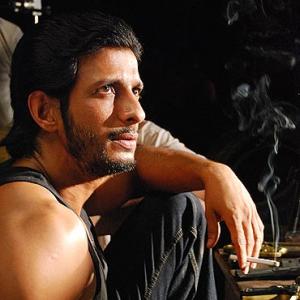 'I don't want to be part of Golmaal type movies'