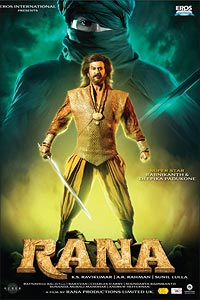 The first day of shoot for Rajnikanth's Rana turned out to be a disaster, as the superstar fell ill and was admitted to Isabella hospital in Mylapore, Chennai.

According to reports, the actor was feeling uneasy during the mahurat shot of the film.

He was apparently suffering from dehydration and fever and after lunch, he complained of uneasiness.

He was rushed to the hospital where doctors advised bed rest for a few days.

Rajnikanth has a triple role in Rana, and he will romance Deepika Padukone in it. The film has been directed by K S Ravikumar, who had worked with him in Padayappa and Muthu earlier.

This is Rajnikanth's first period film, and the first look poster shows him as a bearded warrior.

Oscar-winning musician A R Rahman will compose the music. Rajnikant's daughter, Soundarya, is the technical director.

Produced by Eros International, Rana is slated for a 2012 release.