News
Business
Movies
Sports
Cricket
Get Ahead
Money Tips
Shopping
Sign in  |  Create a Rediffmail account
Rediff.com  » Movies » An Arranged Marriage you can relate to!

An Arranged Marriage you can relate to! 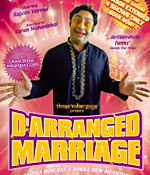 D'Arranged Marriage, a play about Sanjay Gupta, an aspiring New Zealand Indian stand-up comic who spends his life working at his father's corner shop and avoiding the issue of an arranged marriage, has been playing every Friday in a prestigious New York theatre for over five months. It is staged in Soho Playhouse's basement which seats about 80.

The raunchy and wise one-man comedy is written by Tarun Mohanbhai, who like Rajeev Varma, is a New Zealnder. Tarun too performs the show, often in another part of the world, removed by thousands of miles where Rajeev is. Rajeev was trained as an actor in New Zealand.

The last two performances of the current show in New York are scheduled for July 24 and 31. Arthur J Pais spoke to Rajeev Varma for more on the show.

You have had an extended run for the show. What are some of the interesting things that you have heard from your audiences?

Most people just tell me with a big smile on their faces that they had a great time and laughed their troubles away. For us, that is the reward for all the hard work that has gone into D'Arranged Marriage over the years. Audiences are sometimes also amazed that there actually are Indians in New Zealand! I have found that since I have become an immigrant into America I have realised just how much of a minority I am as a New Zealand Indian. There are only about 100,000 of us on the planet and when you leave New Zealand you get a perspective on how rare you are.

How would you describe the show?

Where is the show going from New York?

We are booked to tour to Hounslow in London on September 18th and 19th for a two night tester season there. We are also working with a promoter in Canada for a tour and are in negotiations for a tour to India in December. We are looking at Dubai and South Africa too. The show is returning to Soho Playhouse next year and it is booked for at least 16 performances. 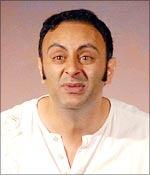 How did show come about?

Tarun Mohanbhai and I created the show together in 2002 for the New Zealand Laugh International Comedy Festival and the brief was to create a 40-minute solo show, so all that we did was jam ideas that made us laugh on the rehearsal floor. It is largely Tarun's story; his parents ran a cornershop. As we jammed ideas, anything we found to be funny we put it in.

As we have tested the show on audiences around the world we have constantly reworked the script and honed it based on audience reaction. I think that this has been the key to our artistic development, listening to the audiences and letting them tell us what they connect with. But the basic premise of the show remains.

What were the themes foremost in your minds?

The themes of inter-generational conflict and culture clash were just natural for us to explore. Like any NRI we have, in our own ways, seen these conflicts played out around us in our families and our friends' families all our lives.

There is a lot about sexual behavior in the show...

Tarun was very keen to highlight the hypocrisy and sexual dishonesty of many Indian men in the community, as affairs are not necessarily an uncommon thing.

How are the sexual gags working?

We have found that the truthful gag is always the funniest gag. The truthful gag gets the biggest laugh. If you give an audience permission to laugh at a truth that maybe painful or offensive, you have done your job as a comedian. It's almost as if the laugh is a release for the audience. 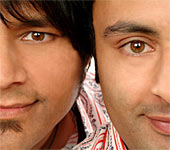 How is that most of your audiences are the young set?

Actually our audiences have been so varied over the years...Sometimes, yes, young Indian professionals will come to the show, but older Indians come too!

How do they react to the show?

I remember a few weeks ago, a group of elderly Indian men and women came to the show and they went up to the front of house staff and asked them to turn down the house music, as it was too loud for them! But they surely enjoyed the show. We don't just have Indians coming, anybody who loves comedy seems to be attracted to the show. New Zealanders in New York have also been coming.

But surely the young desis can relate to the show spontaneously.

I suppose that Sanjay, the main character of D'Arranged Marriage, is 29 years old and many young Indian men (and women) can relate to the challenges that he is facing. Many, many young Indian men and woman have to deal with constant pressure from their families when it comes to their love life and the choice they make regarding their life partner. It's just a truth that in India, traditionally, you don't marry a person alone, you marry into their family. It's a union of families as well as individuals, that's a no-brainer. But in a place like New Zealand, or America or England, love and marriage, sex and sexuality...are all being approached by NRI's who were brought up in a Western environment.

Would you have ever thought of an arranged marriage for yourself?

Never. I met my wife to be (Jessica Underwood, an American) when I was performing in Malaysia. She came to see the show, she was teaching English there.  I don't say arranged marriages are bad, by no means. It just means that the younger generation may have a different way of seeing love and marriage to their parents. We explore this through the lens of comedy.

How are you managing your life between the show and your daytime job? 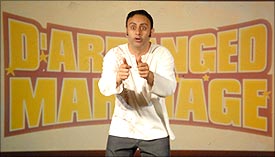 What do you like best about the daytime job?

How do you keep the show fresh?

Having a weekly show on doesn't just take up one night a week. I re-write with Tarun on Saturday nights using Skype and Google docs. We work live online together and we are constantly taking out gags and trying new ones. I have an American director Jim Duff and he comes to the show on Friday nights and gives me notes, so Tarun and I know what we need to focus on. Then once a week Jim and I meet to re-rehearse the scenes that have been rewritten.

People may not realise how complicated even a one-man show is...

It's a laborious but I wouldn't have it any other way. I realise how lucky I am to really be a working artist. Doing my thing in New York City. There are thousands out there that would give anything to be engaged in the kind of process that I have been engaged in for the last five months.

How do you promote the show?

I spend a lot of time handing out fliers at the Indian events in New York. It's grass roots marketing, but it's really paid off. People have been coming to see the show in droves and there's nothing more satisfying after a night of handing out fliers to people on the street, or dropping off fliers into Indian restaurants in the East Village or on Lexington to come to the theatre on a Friday night and find that the show is sold out. That rocks!

So you have to deal with the artistic and the business side of the production...

Tarun and I have been living this life of balancing producing our shows and being creative for the last 8 years. We are blessed really because we can do the marketing work and publicity and then savour the artistic work we do on the rehearsal floor. There is a myth out there that artists need to just focus on their art and that working on production elements of a show takes away their ability to produce quality on the stage or film or TV. Sure, it would've been great to have a full time producer doing all the annoying things that you have to do when you put on a show, like hound publications to list you etc, but the reality is that we never really had that luxury in our careers.

What have you learned from this process?

Somehow, we have done most of it all ourselves and that has taught us a great deal about how to actually put on a show and that knowledge has served me well over the last five months. Artists can create and produce at the same time. It just takes discipline. I feel lucky that I have skills both on the stage and in the office. If more artists stepped up and produced their own work, they would end up happier in the long run.

Are you afraid of anything when it comes to your acting life?

At the end of the day, you are either a working artist or you are not. Nothing terrifies me more than not having anything to work towards creatively. I keep pushing myself to make the show better and it gives me purpose. And boy, am I thankful for that!