Dhool Poised To Be Huge Hit 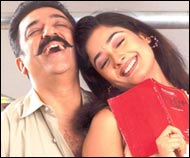 The first week was enough to tell the story  Dhool emerged the clear winner. Industry calculation is it will earn about a crore per territory  which means it is headed for a Rs 15 crore haul, minimum.

Chokka Thangam, with a strong family theme, is set to collect around Rs 80 lakh per territory, which puts it within striking distance of a Rs 6 crore overall take.

Vaseegara has picked up after an initial hiccup, and could end up with around Rs 8 crore overall.

Anbe Sivam was the biggest film off the blocks, made for Rs 11 crore and sold for Rs 4.5 crore for overseas, audio rights and satellite rights for other states, while within the state the film was given on distribution basis, with Rs 3.5 crore collected from each distributor as deposit.

On table, the film was released at a deficit of Rs 3 crore. The film's performance at the box office has been bad, with distributors worldwide losing out  in Europe and Canada it is expected to collect only print costs (approximately Rs 35 lakh); in Australia the distributor is expected to lose around Rs 30 lakh, and in Chennai, the situation is dire.

Veteran distributor Suresh took Chingleput territory for a deposit of Rs 2 crore, and now expects to collect around Rs 50 lakh at best. The Madurai area was taken by former minister Ragupathy for a Rs 70 lakh deposit, and is set to los e around Rs 40 lakh. In Coimbatore, a bastion for Kamal fans, the film is expected to collect Rs 40 lakh tops.

The bottomline is that distributors will have to be given back large amounts out of their deposits, meaning that Lakshmi Movie Makers, the producers, are set to lose around Rs 5 crore.

The other three films mentioned in the list have also bombed  which means that out of seven Pongal releases, four have flopped.

Or again, the cup can also be seen as half full  three are on the way to becoming big hits, and three hits at one time is an augury for a bright new year.