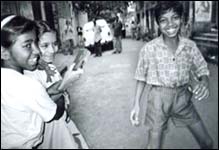 ana Briski and Ross Kauffman's Born Into Brothels: Calcutta's Red Light Kids, an upbeat documentary about children of prostitutes in Kolkata who try to start a new life, is a contender for Oscar nominations.

The Academy of Motion Picture Arts and Sciences narrowed down the contenders for the best documentary feature Oscar on Wednesday to 12 films.

Born Into Brothels opens in New York at the Film Forum on December 8.

Earlier in the year, the 85-minute long film distributed in North America by THINKFILM was a hit at the Sundance Film Festival where it garnered top reviews.

The final five will be announced along with the nominees in 24 other categories January 25, and the 77th Annual Academy Awards will be handed out February 27.

Though Michael Moore, the maker of Fahrenheit 9/11, the controversial documentary that cost $6 million and grossed $220 million worldwide did not enter his film in the documentary category, the competition this year is severe. Moore is entering the film in the main category.

Several well regarded documentaries such as Tarnation, Jonathan Caouette's memoir of a difficult childhood, were not chosen either because they did not impress the selection committee strongly or they were shown on television before their theatrical release as was the case with The Control Room.

The controversial Control Room was made by an American citizen of Middle Eastern origin, Jehane Noujaim, who gave a voice to Al Jazeera network and depicted how it covered the American war with Iraq.

The film, which was widely reviewed and got solid reviews from many mainstream publications including The New York Times, ran for over a month at Film Forum in New York and has been playing in more than 50 cities across America. It has grossed $2.7 million in America.

Robert Greenwald's Uncovered: The Whole Truth About the Iraq War did not make the list too. Rick McKay's widely praised Broadway: The Golden Age was also a loser.

There are many films on the list including the humourous and scary Super Size Me, which slaps fast food industry, that were commercial hits too.

Given the intense competition, the Briski film's success is commendable.

A portrait of several children who live in the red light district of Kolkata where their mothers are prostitutes, Born Into Brothels, celebrates New York-based photojournalist Briski's efforts to change the lives of the youngsters. She gave them cameras and taught them how to take pictures, leading them to look at their world with new and hopeful eyes.

The other films chosen by the Academy include Paola di Florio's Home Of The Brave, a study of civil-rights activist Viola Liuzzo and Deb Ellis, and Dennis Mueller's celebration of populist and radical historian Howard Zinn, You Can't Be Neutral On A Moving Train.

Touching the Void, Kevin Macdonald's gripping account of two climbers who nearly died in the Peruvian Andes, has grossed over $5 million in America. It was also a surprise BAFTA winner this year for best British film award.