'Till late on the night before the National Awards ceremony, Smriti was in talks with the President's office, hoping to make the President change his mind.'
Subhash K Jha reports. 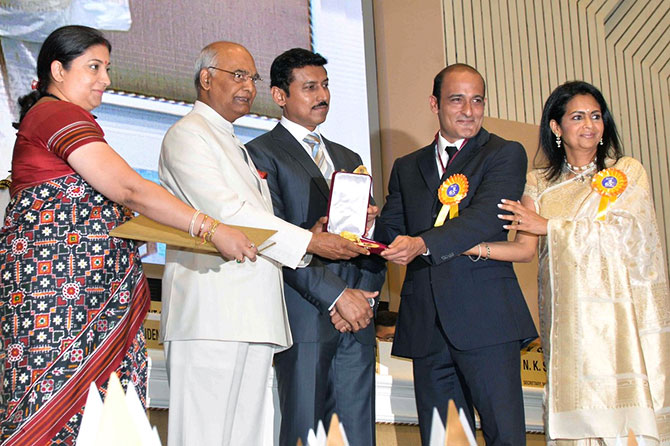 A couple of days after Smriti Irani was given marching orders from the information and broadcasting ministry, there is still disbelief about what happened.

"This came as a complete bolt from the blue," a source tells me, speaking on condition that s/he would not be identified by name for this report. "Some of us left for Cannes. Smritiji was supposed to join us. But she opted out at the last minute since orders came from the PM's office that she was needed in Karnataka."

"Now we return from Cannes and she is no more the I&B minister! What happened? Whom do we submit our lengthy report to? The initiatives at Cannes to promote regional Indian cinema in a way was all Smritiji's (idea)," the source adds.

A Bharatiya Janata Party leader says Smriti was shunted from the I&B ministry because she was taking unpopular decisions.

"Too many bureaucrats were being transferred. Salaries were being blocked," says this BJP leader. "But it was the National film awards fiasco that did her in." 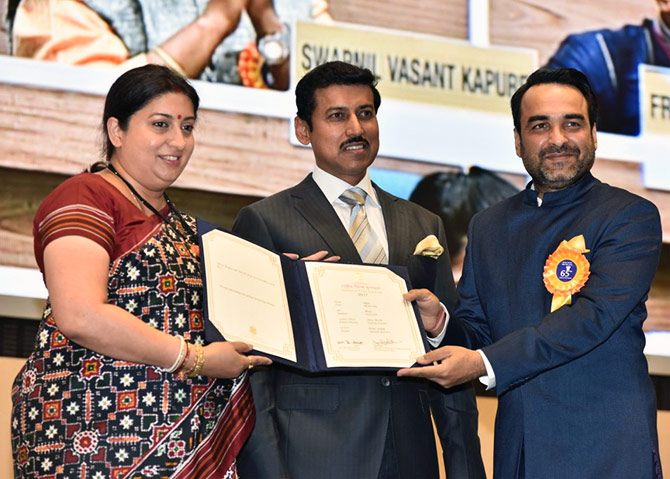 IMAGE: Smriti Irani and Colonel Rathore present the Special Mention Award to Pankaj Tripathi for his role in Newton.

"The fact that a majority of awardees chose to boycott the National Awards function after the President's refusal to hand over the awards personally to each and every winner really went against her," the BJP leader said.

"If the President had communicated his inability to attend the entire function to Smriti, she should have communicated the same to the awardees."

A colleague and friend of Irani -- who remains Union textile minister -- defends her stoutly against charges of negligent communication.

"Till late on the night before the National Awards ceremony, Smriti was in talks with the President's office, hoping to make the President change his mind," the friend reveals.

"As for taking unpopular decisions, she was only trying to improve the running of the various government cultural organisations. She had no hidden agenda," the friend adds.

"Her ouster is a blow to all of us and to the belief that women in politics are poised to be given an equal position to men," the friend points out.

"The minute a woman tries to assert herself, she is seen as a threat."