When I first set eyes on Madhuri... 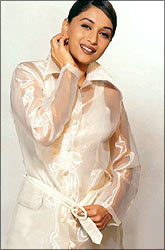 Madhuri Dixit may have said goodbye to Bollywood, but the industry refuses to forget her. On her birthday, Indra Kumar (who directed her in Dil, Beta and Raja), and Akbar Khan (her first co-star in Swati), talk about her fondly. Also wishing her is celebrated artist Maqbool Fida Husain, who saw her in Hum Aapke Hai Koun...! 67 times, painted a whole series of paintings on her, and even directed her in Gaja Gamini.

"I remember the first time I met Madhuri. Someone I know brought her to meet me. This is before I became a director and she a star. The first thing that struck me was her innocent, expressive face. She was just a child, and awfully thin. I actually recommended a diet for her so she could put on a bit of weight. I have no idea if she followed it, but she changed drastically soon after. That first meeting is still imprinted in my mind, particularly because I had no idea that the frail little girl would go on to become such a huge star. She was polite, quiet and very humble. I must be the only director lucky enough to have worked with her in three movies. I must say that she grew by leaps and bounds with of them. What is striking is that Madhuri, the person, remained the same throughout -- always humble, friendly, sharing a good rapport with co-stars and the crew.

She has been a fine actress to work with and, more importantly, a great friend. I just met her last month and we discussed a few ideas. I would love to make more films with her, if I get the right subject. Apart from wishing her a very happy birthday and best wishes, I would want to urge her to make a comeback quickly because this industry needs an actress of her calibre." 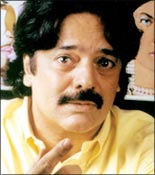 "It was during the shoot of Swati. I remember seeing a sweet girl sitting at the corner of the sets with her mother all the time. I didn't know who she girl. I was the hero of the film and my heroine was Meenakshi Sheshadri, who was a big star then.

The girl was a reflection of perfect Indian beauty. I could see some kind of magic in her eye, but I didn't introduce myself. I only felt that she had the beauty of three great Indian heroines -- Madhubala, Nargis and Vyjantimala. When I asked about her, I was told her name was Madhuri Dixit. She had the role of a tomboy in the film and was playing Meenakshi's stepsister.

The film was about a woman's liberation, and how she goes beyond societal norms to do what she feels is right. It was directed by Kranti Kumar and produced by the late L V Prasad. Madhuri had an insignificant role but, while shooting, I found that her body, eyes and acting really synchronized well. It was unbelievable for me to see a first timer give such a brilliant performance.

She rose from nowhere to become the biggest star of Indian cinema. No actor today can match her peak. One of my biggest regrets in life is never getting a chance to work opposite her or direct her. I hope to get a chance to do that in this lifetime.

I think what set Madhuri apart from other heroines of her time was her sincerity. She has a million-dollar smile that resembles that of Madhubala and the actress Nimi. She manages to look sensuous in whatever she wears -- Indian or Western. She is also an amazing dancer. I can't think of any actress today managing to do what she did. I envy other heroes who got a chance to act with her.

If Leonardo Da Vinci were alive today, he would have painted Madhuri instead of the Mona Lisa." 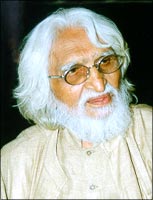 "She is a complete actress. There were some like Nargis who were known for their performance, Madhubala for her beauty and Vyajayanthimala for her dancing, but Madhuri is 'all-in-one.' She is complete. A phenomenon. Ashok Kumar once said that she is one 'complete' actress that India has produced in 100 years. I totally agree with him.

There is just one thing Madhuri lacks -- a single memorable hit that can be remembered in future. The people who handled her work were wrong. She came from a middle class background and, therefore, the agents she had were not good.

She went to the commercial industry, into the hands of the wrong people. She is talented and a dedicated professional, but she still doesn't have memorable roles like Nargis did. As we didn't have even one creative director then, she had to do all the commercial dance movies. And I arrived too late in the industry. Even otherwise, it was difficult getting close to her as her secretaries and agents wouldn't let us meet her.

Bollywood is a third grade industry. We do not have any great creative directors here who can exploit her talent. We had Satyajit Ray in Bengal and Adoor Gopalakrishnan in the south. The only good director in Bollywood is Sanjay Leela Bhansali. Therefore, though she had a successful career, she doesn't have that one movie which will remind us of her exceptional work.

I first met her in 1995, on my 88th birthday. She was in Boston giving a live performance. Due to her popularity, there were 40,000 people just to catch a glimpse of her. Even people on wheelchairs were there. The audience whistled during her dance. She was a craze. When I met her, she told me we could cut my birthday cake in her room. I told her she was in the wrong hands, only doing commercial movies and that I would like to do a lot of things for her, to which she replied: 'Aap bahut der se mile' (I met you pretty late).

She was very humble, down to earth and would treat everyone equally. She had no airs. I once saw her meeting some of her fans, and being very friendly with them. I told her she shouldn't be so close to so many people as one never knew what intentions they had. She replied that she was where she was because of her fans.

When her husband (Dr Sriram Nene) asked me if I would like to go sightseeing, I told him there was no need to go out when there was such a nice movie at home -- Madhuri playing the role of housewife and mother. It was a perfect picture.

I feel Madhuri should make a comeback again. And I strongly feel people will appreciate it. She should concentrate on more serious roles though, and give up running around trees. I wish her all the best for her future."