Pappa still has the last word 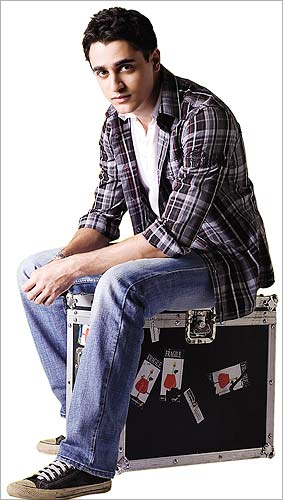 First the vamp disappeared, since Bipasha Basu could ambidextrously play the lady and the tramp. Now the parents have turned into Pumpkins. Mothers no longer look like Nirupa Roy. They look like Kitu Gidwani and Anooradha Patel. No glycerine tears, no lockets with pictures of separated sons, no emotional blackmail. Widowed moms wear red salwar kameezes and threaten to wring the necks of their dead Rajput husbands.

And the fathers don't twirl mustaches and threaten a horsewhipping. Or say things like 'Bas, it's decided. You are marrying her. I've given my word.' There is an old school macho dad, but he's really a dead man walking and at his manliest, he just smirks and does a jig. Actually come to think of it, everything he predicts also comes to pass. (Even dead dads apparently know better.)

What a whole different world it was when the very same Aamir Khan, who produced this movie to launch his nephew Imran, shot to stardom in Qayamat se Qayamat Tak in 1988. Sure he got to strum a guitar and wear bitty denim shorts and be lovelorn but, damn, he had challenges.

Papa Kehte Hai Bada Naam Karega, he crooned, weighed down by the oppressive burden of parental expectations. In JTYJN, Rats' mom is advising Meow to become a filmmaker because the country needs more intelligent filmmakers. No one seems particularly bothered, at the end of college, about what they will become.

And to be honest, I am not sure what they do become -- one gets a mustache, and one gets a toupee, but passage of time gets mixed up with time pass. And the biggest changes are in hair.

This new parental avatar has meant the end of another hallowed tradition -- the Capulet-Montague doomed love affair. QSQT, despite its contemporary look, was really an old-fashioned star-crossed love story.

In JTYJN, director Abbas Tyrewala has a Herculean task -- how do you keep the plot moving, when everyone from parents to friends are all on the same side? There's no Capulet-Montague, no jealous Iago, even the horse cooperates in mapping the course of true love down the deserted night streets of Mumbai.

My theory is that the parents, who were once the cool young jet set (Kitu Gidwani, Jayant Kripalani etc) have just decided not to grow up. India is taking off, the country is abuzz with energy and optimism and they want a slice of it, because they helped create it for all of us on television twenty years ago.

Now they have stuck themselves in a Neverland of permanent youth. They might be going gray, but dammit if their daughter is going to be Meow, they get to be Pumpkin. If you can't beat 'em, join 'em. They are not parents. They are best friends. They read Naomi Wolf, surf the web, and have cocktails.

Interestingly the most alternative rebellious character in the movie, a brooding, ear-pierced, white mouse-petting, night-owl artist type played by Pratiek Babbar, is the one in the group who has no cool nickname. In the world of Rats and Meow and Bomb he just stands out as simple, plain Amit.

And he is the one the parents don't understand, because he never lets them into his room. And he never seems to leave the house either. Why would he? The world outside and the world at home have all merged into a happy-go-lucky fizzy Coca Cola commercial. And he is an outsider in both.

The success of JTYJN in India is being heralded as the youth market finding movies that tell their stories. I think the parents are laughing all the way to the bank. They won. They crossed over the generation gap.

I am just glad that at the end of the movie, when the credits rolled over the happy couple, a self satisfied mommie doesn't show up and roll her eyes and say 'I told you so. Now if you had only listened to me in the first place.'

So now we can all go have a latte at Café Coffee Day, yaar. Are you treating, Pumpkin?

Photograph: Imran Khan in a still from Jaane Tu...