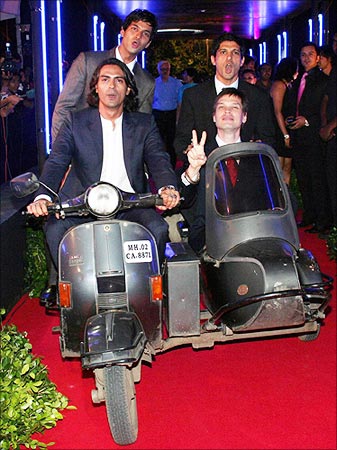 Farhan Akhtar is known to do everything in style. At the Mumbai premiere of his acting debut, Rock On, Farhan -- along with co-stars Arjun Rampal, Luke Kenny and Purab Kohli -- entered the venue on a scooter.

The film has already got good reviews, and reminds us of his directorial debut Dil Chahta Hai.

Farhan seems gung-ho about his new film, and held

a special screening for Naseeruddin Shah and his wife Ratna Pathak as he was leaving for an outdoor schedule from Mumbai.

Let's see whether the audiences welcome Rock On with open arms, when it releases today.