First Look: Saif does a Beckham 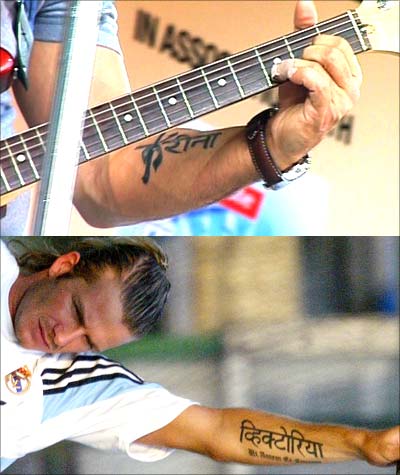 Here's to girlfriends with shorter names.

The story goes that Saif Ali Khan -- actor, and part-time guitarist, pictured above -- got his tattoo after ladylove Kareena Kapoor put her foot down and insisted.

In trueblue Bollywood style, the actor followed footballer David Beckham's example and got the name inscribed on his forearm in Devnagri, like he did for his wife Victoria.

Of course, as Johnny Depp knows, getting a girlfriend's name chiselled into your arm not only hurts but also smarts, especially when you break up. Which is why his 'Winona Forever' tattoo was smartly altered to 'Wino Forever' after his split with Winona Ryder.

Here's hoping these boys don't have to alter their tats -- then love will be all about finding a Reena, and a Riya.