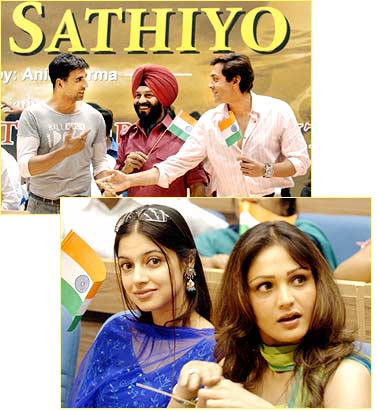 Anil Sharma is wellknown for his anti-Pakistan movie themes.

His Gadar: Ek Prem Katha is one of the biggest blockbusters in Indian movie history and was followed by the reasonably successful, The Hero: Love Story Of A Spy.

Sunny Deol, star of both films, does not feature in Ab Tumhare Hawale...

The music launch saw the reel heroes mingling with war veterans and the recently released Kargil prisoners of war.

This is Bobby's first film with Sharma. He plays a double role, as Bachchan's son and grandson.

The movie was launched at IIFA 2003 in Johannesburg.