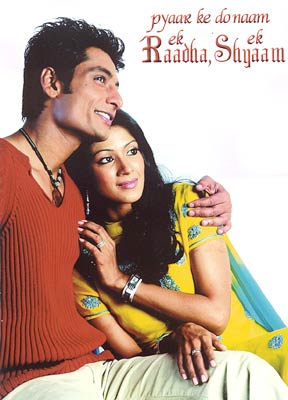 A press conference for a television serial is usually associated with a five star hotel or a channel's plush office. But the launch of Pyar Ke Do Naam: Ek Raadha Ek Shyaam was different.

In sync with the name of the serial, it was held at the ISKCON temple in Mumbai.

Produced by one of the big names of the silver screen, Rajshri Productions, Pyar Ke Do Naam is based on the concept of reincarnation.

The story is about Raadha and Shyaam, who after meeting each other unearth their past feelings for one another. They realise that life has given them one more chance -- since they could not unite in their previous birth. But even in this birth they have to face challenges.

Directed by Kaushik Ghatak (of Kyunki, Sanjeevani fame), this serial will travel through the 1960s to the 21st century when the lovers try to unite in their second birth.

Newcomers Indraneil Sen Gupta and Barkha Bisht play the lead roles of Shyaam and Raadha as well as their previous births  Kisna and Shyaama.

"Today's generation does not realise the depth of love," says Kavita Barjatya, creative head of the television wing of Rajshri. "We are trying to portray the depth of love spanning across births in the serial. Apart from the love story, this serial also carries a social message."

The serial, which will see veteran actors like Tabassum and Ramesh Deo making a comeback on Indian television, is being shot at Wahi, Panchgani and Mahabaleshwar in Maharashtra.

Pyaar Ke Do Naam will be on air at 8 pm between Monday and Thursday, from April 3.