As an Indian American actor in Hollywood, Kal Penn has played very diverse roles -- from coping with the angst of being a brown-skinned kid, who has to deal with the burden of his name and heritage in Mira Nair's The Namesake, to a slacker sitting on a toilet with a case of bad stomach in his latest Harold And Kumar Escape From Guantanamo Bay. And for the fans who are keeping track -- the bad stomach problem in this film is the result of all the hamburgers he ate at a White Castle in the first Harold & Kumar venture from 2004.

"To me, the joy of being an actor is to do things that you would never do in real life," says Penn, who turned 31 earlier last week. And Penn's Kumar Patel character does other crazy things in the new Harold & Kumar, including taking his pants off at what is billed as a bottom-less party (as opposed to the top-less party) and even smoke marijuana in a plane -- which gets him and his buddy Harold Lee (played by the Korean American actor John Cho) shipped to Guantanamo Bay.

Penn explains, that in the sequel he and Cho used body doubles in the scene that required them to pull down their pants.  But that was Penn walking around naked in his apartment in the original film. "When you do not have much clout in your first few movies, you cannot say that you will not be naked," Penn says, as he laughs.

Later in the film, Harold and Kumar also sit down and smoke pot with President George W Bush (played by James Adomian, who sounds just like the president would if he was on drugs) at his Crawford, TX ranch. That can be blasphemy and heresay to those who hold the presidency in high regard, but on the screen it is a very funny scene.

"This is not a high brow film," Penn says seriously. And he is right. The current Harold & Kumar is silly, crude and yet very funny -- just like the first film. The sequel is rated R for "strong crude language and sexual content, graphic nudity, pervasive language and drug use." The first film and its DVD had a huge following among fans but also among serious and influential critics.

In reviewing the first Harold and Kumar film, A O Scott of The New York Times wrote: "Harold & Kumar is as delightfully stupid as Friday or Road Trip or Wet Hot American Summer, but it is also one of the few recent comedies that persuasively, and intelligently, engage the social realities of contemporary multicultural America." 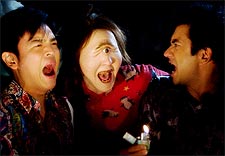 "What Jon (Hurwitz) and Hayden (Schlossberg) did was to write a broad comedy," Penn says, referring to the two creators of the Harold and Kumar characters, who wrote the screenplay for the first film, and directed the sequel. "So if you only want to laugh at toilet humour, you certainly can. If you want to laugh at the gratuitous nudity, you can. There is no other reason for it, than being gratuitous. And yet, if you want to look at its subtext, then you are free to look at that it from that perspective.  And a lot of critics saw that in the first one."

Hurwitz and Schlossberg were best friends from high school in New Jersey and later both attended University of Pennsylvania. "The generation that we come from, it's not odd to have guys like Harold and Kumar in your high school," Hurwitz says, adding that he and his partner were writing about characters that were similar to them.

Hurwitz recalls his two best Indian friends from high school. "They were exactly like us; very similar priorities, life experiences, expectations from parents to go to stable fields. And they were really funny guys, no different than we were.  They just looked different."

But even with two Asian American characters, the Harold & Kumar films are different in that the stories are not just about the characters and their immigrant experiences. And that is the essential difference between a film like Harold And Kumar Escape From Guantanamo Bay and The Namesake.

Penn is not different than the friends that Hurwitz and Schlossberg grew up with. He is a son of Gujarati immigrant parents. His father is an engineer and his mother a fragrance tester at a perfume company. He was born as Kalpen Suresh Modi in Montclair, New Jersey. He graduated from Freehold Township High School and later attended college at the University of California, Los Angles, where he majored in film and sociology.

Despite his success in Hollywood and even though he is by far the leading Indian American actor in film and television in this country, Penn continues to pursue other interests. He is currently teaching an Asian American sociology and cinema class at the University of Pennsylvania. In the course, Penn touches upon Asian American images in cinema -- from the silent era to the current day, coupled with some basic film making and business lectures. At the same time Penn is also registered in a graduate certificate level course on international security at Stanford University. 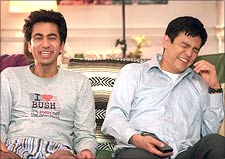 Also, even though he is busy with current role on House, Penn has found time to follow another passion -- volunteer for Senator Barack Obama's presidential campaign. In his role, he speaks at college campuses. He is aware of his ability to draw students to listen to his stump speeches about Obama. And he is impressed that he is never asked any question about his films or himself as an actor.

"I was hesitant about going there as a celebrity," Penn says. "I didn't want to do it blind. I am an independent and I have never done anything like this before.

"It's been a unique opportunity to reach out to people," he adds. "The only reason I have what I have is because they are buying my movies and my DVDs. If people on minimum wage can afford my DVDs, then they should be able to afford good healthcare also. I don't want to be preachy about it but he (Obama) is someone who doesn't take money from lobbyists, was opposed to the Iraq war from the beginning and turned down corporate jobs to become a civil rights lawyer. We are at a rare point in American history."