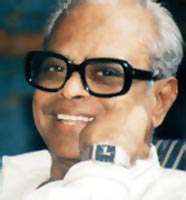 K Balachander, who brought a whiff of fresh air with daring new style in direction and filmmaking in Tamil cinema in the 1970s, was today chosen for the Dadasaheb Phalke Award for the year 2010.

The award, which is given for outstanding contribution to the growth and development of Indian Cinema, was announced by the Information and Broadcasting Ministry based on the recommendation of a committee of eminent persons.

Balachander (81), who made an amazing transformation from a government servant in the Accountant General's office to a writer of amateur playright and then to a leading personality in films, introduced an easy style in script narration at a time when Tamil cinema was dominated by melodrama.

He started with dialogue writing for MGR's film Dheiva Thaai but never worked with the big stars of the industry then either MGR or Sivaji Ganesan, later. His 1975 film Apoorva Ragangal' (rare ragas) made in Telugu as Anthuleni Katha introduced superstar Rajnikanth to Tamil and Telegu cinema.

The film, which also saw Kamal Hasan and Rajnikanth act together early in their career, was a brilliant display of inter-personal relationships between father-son and inter-generational romance leading to a complex situation.

Apart from Rajnikanth and Kamal Hasan, actors Sujatha, Jaya Prada and Sarita were all his discoveries who later became big names in South Indian cinema.

Balanchander's bilingual Maro Charitra starring Hasan and Rati Agnihotri was a big hit of the times that was later made in Hindi as Ek Duje Ke Liye that made waves in Bollywood.

Born in a brahmin family, his films, specially Arangetram (inaugural performance), were also a sort of insiders' revolt when he went against accepted norms to put across his views. He had also won the Padma Shri in 1987 and was honoured with the title Kalaimamani by the Tamil Nadu Government in 1973 and various awards from government of Andhra Pradesh as well as filmfare awards

Born in Thanjavur District of Tamil Nadu in July 1930, Balachander came into prominence as a playwright with his dynamic plays like Major Chandrakanth, Server Sundaram, Naanal and Neerkumizhi.

These plays enjoyed huge popular and critical acclaim. He entered the film industry in 1965 and shot into fame with his very first film Neerkumizhi starring Nagesh. For the last few years, Balachander has also turned his attention to the small screen. The Dadasaheb Phalke award consists of a 'Swarn Kamal', a cash prize of Rs 10 lakh and a shawl. The award is given on the recommendations of a committee of eminent persons.

Join us in congratulating K Balachander!