News
Business
Movies
Sports
Cricket
Get Ahead
Money Tips
Shopping
Sign in  |  Create a Rediffmail account
Rediff.com  » Movies » 'Who are these people who want to show the Emergency in a positive light?'

'Who are these people who want to show the Emergency in a positive light?' 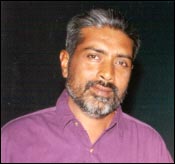 Last year when the National Democratic Alliance government asked him to make a movie on Jayaprakash Narayan, he saw it as an opportunity to tell the story of a leader he greatly admired.

The movie -- Loknayak Jayaprakash -- made, he submitted it to the Prasar Bharti Corporation and was promised that it would be aired on October 11, JP's birth anniversary.

But now that a Congress-led government is at the Centre, the director has been told that the movie will have to be 'modified.' He has been told through a letter that the 'need to impose the Emergency and counterpoint' should also be brought out in the film.

Jha refuses to touch the movie now, saying, "You cannot make a film about JP which is not dealing with the Emergency." He spoke to Senior Copy Editor Salil Kumar.

What is the controversy about?

The controversy is very stupid. The film was commissioned to me last year in September. The directive was to make a film on Jayaprakash Narayan. First they wanted me to make a serial, but I said, "Let me just make one long film."

I took up the work in September, and then we researched and eventually went to all the places that were associated with JP, we recreated all the scenes and we cast an actor and we dramatised the whole thing and we shot the film over four months. The script was already submitted to them [Prasar Bharti]. And it is a combination of, you know, like, real-life story, commentary, dialogue... interviews with people.

And you cannot make a film about JP, which is not dealing with the Emergency, can you?

So the Emergency is dealt with in its normal way and some people while talking about the Emergency in JP's film, in context to JP, they have said, "Indira Gandhi ne JP ke saath zyatti kee." Somebody has said, "It was like a dictatorship." There are 7, 8 such sentences.

Their [the government's] basic problem is that the Emergency is being shown in a negative light. They want me to portray a positive view also.

The best thing is the film was completed and submitted on March 31. For the next month or two they reviewed it internally. They had some problem with the length of the film, so they called me. I did the needful and finally submitted it.

They accepted the picture. Made the final payment to me. On August 23, Sarmaji [Prasar Bharti chief executive K S Sarma] wrote a letter to me saying that the film would be telecast on October 11 and all publicity work will also be done. You don't worry. I am writing a letter to DG, Doordarshan, saying, 'Make sure that it happens.'

And then you don't telecast the film and when people ask questions you say, 'There are a lot of problems with the film and we have explained those problems to Prakash Jha.'

And so I called them and asked them what the problems were. So they sent me a fax day before yesterday [October 13] asking me to delete certain portions of the film and give a positive spin to the Emergency.

When Sarma was fine with it, who do you think objected to the scenes?

I have absolutely no idea because then I received this letter from DD. I can't understand who in his good sense would want to show the Emergency in a good light.

A couple of days ago Rahul Gandhi deplored that chapter. Before him Soniaji said the same thing a couple of times before the Lok Sabha election. Indira Gandhiji herself has said, and I have her quotation, that Emergency kaa afsos hai unko aur yeh galat hua [the Emergency was wrong and she regretted it].

Who are these babus, who are these people in the government, in the Congress, in the Left or in the coalition, who want to show the Emergency in a positive light? 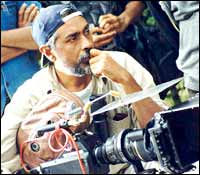 Yesterday Laluji [Railway Minister Lalu Prasad Yadav] said, "Arre, who toh tod-marod ke Emergency ko dikhaya hai. [He has distorted facts about the Emergency.]" And these are people who fought against the Emergency. Who am I to say something? Am I somebody to put words into [the mouths of] people who are speaking on camera?

Now Lalu is supporting the Emergency! Or so it seems. Chalo bhai, ab yeh din bhi dekhna tha [What a pass things have come to.]

Do you think it is part of the government's 'detoxification' programme?

Incidentally it has occurred at the same time that they have thrown Anupam Kher out [of the Central Board of Film Certification] without rhyme or reason. Just because he had been appointed during the BJP's rule. Kamaal hai! Why don't you throw all the bureaucrats out?

It is a mindset. It is basically a feeling of insecurity. It is narrow-mindedness, which is basically what every government nowadays is trying to do.

How many minutes have you been asked to snip?

Minute-vinute kee baat chhodiye. We have told them that you are the owners. We are not going to touch it. You do whatever you want.

So as far as you are concerned your role is over now?

Yes, my role is over. I only have to see ... if they try to mutilate it creatively and show it, then we will see what has to be done.

What is your take on the censor board controversy?

I think it is the most sad thing that has happened. Now Sharmila Tagore who has accepted [the CBFC chief's post]... what kind of sensibility does she have? Some other government will come and treat her like that only.

We should understand one thing: if governments have the same mindset... they have a divisive policy. They want to divide the film industry also. Yeh BJP kaa actor hai... yeh Congress kaa actor hai

What can you do about it?

Will you take up any more assignments for DD?

Why will I not take up? I will take up. But I will not bend down to their whims and fancies.