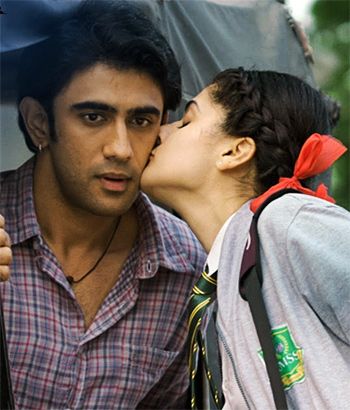 'I have been a part of more than a dozen films as a cinematographer but this was the smoothest shoot of my life. There was not a single day, when I wondered how a particular shoot would be done.'

This Friday introduces us to yet another director, as Amit Roy releases his first venture Running Shaadi.

Starring Taapsee Pannu and Amit Sadh, the film is produced by Shoojit Sircar.

Roy started his career as a cinematographer and has worked with Ram Gopal Varma in films like Nishabd, Sarkar and Sarkar 2.

He has also directed many ad films.

He tells Patcy N/ Rediff.com why he asked Shoojit Sircar to produce his film, and not RGV, and much more.

It's your first film release. Anxious?

How did the story of Running Shaadi come to you?

It came from Navjot Gulati, the co-writer of the film. He came to me with this idea of a guy from Patna, who starts this service in Amritsar called Running Shaadi to help people run away and get married. I thought it was a great idea but why not make it an online portal.

Before writing, we thought of understanding it -- if there would be an online portal for such a service, what would the business idea be? So first we researched the business idea. We went to Amritsar and posed in front of a wedding registrar as people whose friend wanted to elope.

We told them that this friend wanted to get married in a week's time and asked them for advice on how to do it. They gave us some loopholes.

Just getting married in front of a pandit isn't enough. You have to register the wedding for it to be legally recognised. So you need a wedding invitation, some wedding photographs and a couple of witnesses. If there are relatives, even better.

They told us it's easy to get a card printed, wedding photographs can be photoshopped and they would arrange for the witnesses. We put that scene in the film too.

Did you come across any portal that was actually doing it?

We did search for one but we found nothing of the kind. 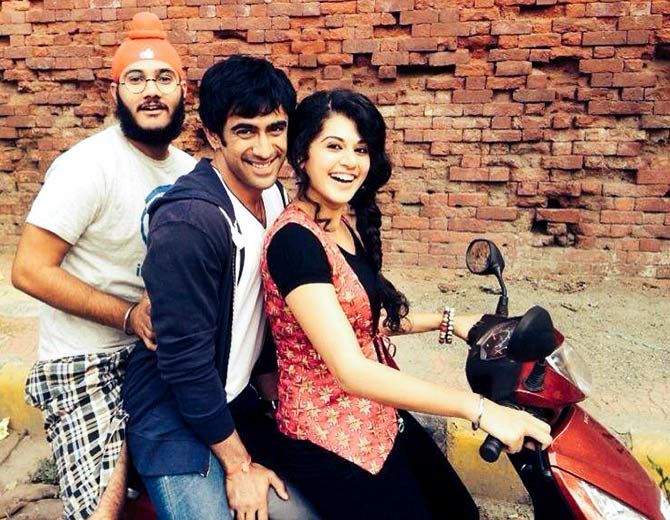 How did you move ahead from there?

Navjot and I spent our own money, went to Amritsar, did our research and spent more than a year to write the script. When we were happy with the script, we wondered if we could cast the actors and then it would be easier to get a producer.

So we met Amit Sadh and Taapsee and they agreed. Amit had just done Kai Po Che and I was really blown by his performance. Casting director Mukesh Chabbra, who is a good friend of ours, was very supportive about the project and he organised a meeting with Amit.

I had a certain image of him from Kai Po Che, where he plays an older character and is quite vernacular. He was very desi, so was his lingo. When I met him at a restaurant, I was shocked because he walked in like a cool Bandra dude. He was very polished when he spoke.

What struck me was that this guy was so skilled as an actor that he could not only physically transform himself but also change his body language, mannerisms, speech pattern and above all, his thought process for a role.

I thought if this Amit Sadh could play that character in Kai Po Che, he could also play a tree! He would play anything convincingly. He is that good. We hit it off and I gave him the script.

He called me in a couple of hours of getting the script and said that he loved it and wanted to be a part of the film.

For the girl, we wanted someone with a regular speech pattern with that flavour of North India. I couldn't think of anybody who would fit in this role.

Kareena (Kapoor Khan) had done a Punjabi chick Geet in Jab We Met but she would be a bit older for the role.

Navjot suggested Taapsee, who was big down south and had acted in Chashme Baddoor, which I hadn't seen. He knew her background, that she was a Sardarni from Delhi, and would have the same nuances as a Sardarni from Amritsar. She could match the speech and mannerisms.

Casting director Abhishek Banerjee helped us meet Taapsee. She happened to be in Mumbai at that time and met us immediately.

When she came, she sat down and started talking. In 30 seconds of seeing her, I thought if I could capture her the way she is, it would be bang on like Nimmi, the character of my film. I knew I had to have her in my film and she just had to be herself.

We gave her the script and in a couple of hours she called back and said she was in.

Both actors did not ask about the producer or other things.

I approached Shoojit Sircar, whom I have known for a long time. He liked the idea and agreed within two days, after speaking to his partner Ronnie (Lahiri) and the finance people of his company, Rising Sun. Three months later, the shoot started. 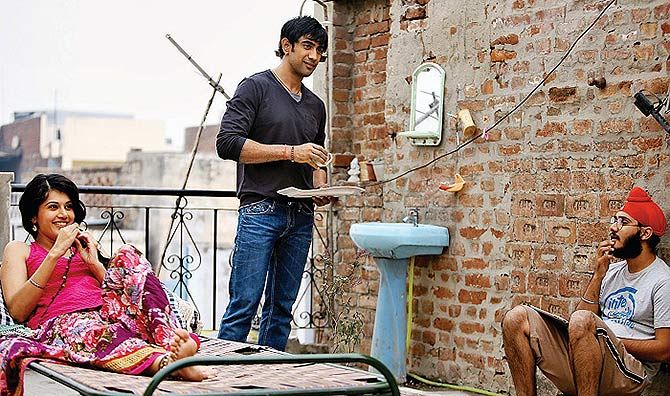 How is Shoojit as a producer?

He was involved in the writing process and came on board only after the script had been heavily worked upon.

He said a film is the director's baby so it was completely my call. I was free to take his suggestions or not. He didn't impose anything on me. He just allowed me to make this film to the best of my ability

Ronnie was more hands-on and was present throughout the shoot. He was my biggest bouncing board.

I have been a part of more than a dozen films as a cinematographer but this was the smoothest shoot of my life. There was not a single day, when I wondered how a particular shoot would be done.

Both directors whom Shoojit has worked with, including PINK director Aniruddha Roy Chowdhury are Bengalis. Does he connect with Bengalis more than others?

Shoojit likes to work with people whom he is close to and it just a coincidence that I am a Bengali. We have known each other for so long -- he started his career assisting my uncle Dipak Roy, who is a National award winning documentary filmmaker.

He has always felt connected to me because of my uncle. I have shot a lot of ad films which were directed by Shoojit. We have seen each other grow over the years.

I was in school when he was assisting my uncle. When I was still in college in Delhi, he had already become a big name.

Then he came to Bombay and made ad films. I have followed his career throughout, almost like a fan boy. There are just two producers whom I would obey blindly -- Shoojit Sarkar and Ram Gopal Varma. 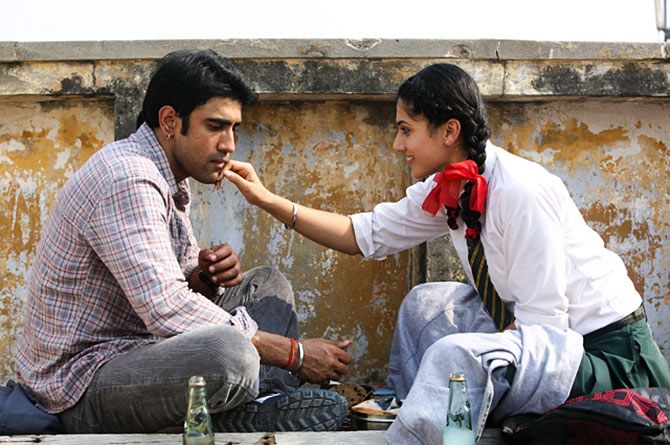 Since you have worked with Ram Gopal Varma, why didn't you approach him to produce your film?

I would credit Ramuji for giving me this idea to direct. I did not want to be a cinematographer, I always wanted to be a director. I put the direction plan on the back burner because I was doing well as a cinematographer.

When I was shooting Sarkar, Ramuij told me I could be a good filmmaker. After that film, he told me to stop cinematography and take a year off, write a script and come to him.

I didn't go to him with this film because I know his sensibilities so well that I know this is not his kind of a film. He relates to power and a different world; this film doesn't belong to his world.

I thought he might not like it and may try to influence it in his way -- and I would get influenced because I follow him blindly. (laughs). If you see the kind of films that are being done these days, this is closest to Vicky Donor.

Sarkar released in 2005. When did it really strike you to start directing? You haven't worked much between 2014 and 2017.

I was directing ad films during that time. I had become popular as a cinematographer and was getting one film after another. But after Dum Maro Dum, I told myself as well as the industry that I want to direct.

I remember Shaad (Ali) was planning to make a film. When he met me on a flight, he asked me if I was free. I told him I had retired.

I had to break that cycle and be out of work to actually sit back and write because writing is a very solitary process. You can't be do it alongside other things. Cinematography is a very consuming process because your day starts before everybody else and ends after everybody. It is also a very physically demanding job, so after that eight to twelve hours of cinematography, you can't do anything.

Shaadi.com had a problem with the original title of the film, Running Shaadi.com.

Yes. They went to the High Court and the esteemed judge told us we can't use that title.

But it does not change the film. We have muted and beeped certain words. We did not have to re-shoot or re-dub anything. 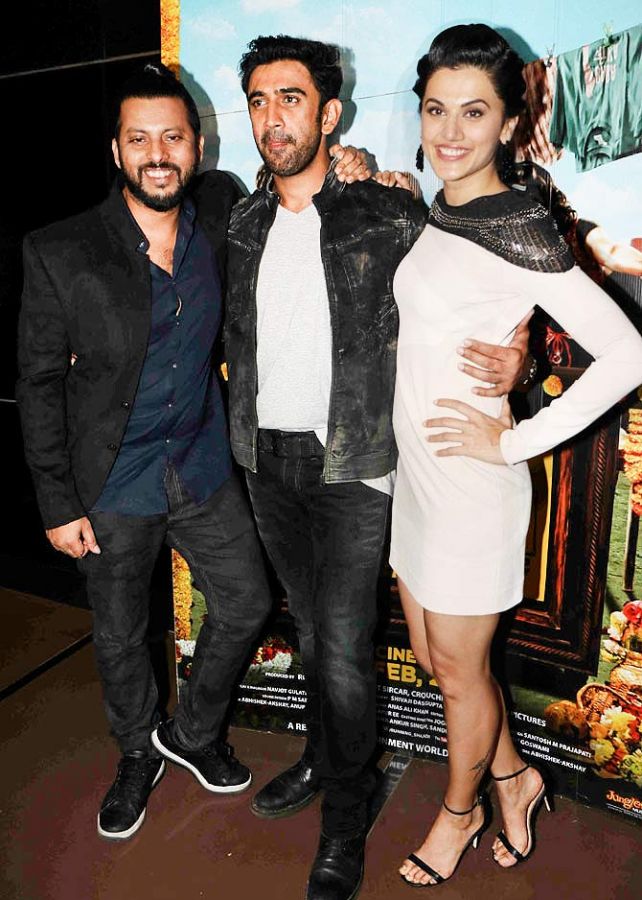 I loved watching films as a kid. I was a huge Amitabh Bachchan fan. I have watched all his films.

But I really caught the bug when I was in Class 10 or 11. I had gone to my uncle's house but he wasn't there. I chanced upon a screenplay that he had written. Reading that blew my mind because it suddenly hit my mind for the first time that all those movies that we watched came from somebody's imagination. So I started writing.

I was fascinated by the idea that one can imagine cinema and then make it. I started studying directors and realising why a particular director's film is better than the other's.

One day I discovered a book on Satyajit Ray which transformed everything I had ever thought about cinema. It was a biography on him called The Inner Eye by Andrew Robinson. It changed my perception of cinema.

I did not want to be a cinematographer but since my uncle had a film camera, I started assisting him. Being the youngest on the set, the responsibility of taking care of the camera always came to me. I spent a lot time with it.

When I came to Mumbai, I couldn't find work as an assistant director. But because I could shoot, I started getting work as a cameraman and I started enjoying it. I got sucked into it until Ramuji reminded me of my original dream.

So what after Running Shaadi?

There is a period drama that I've been writing for 10 years. There are also two science fiction films. Let's see what happens. 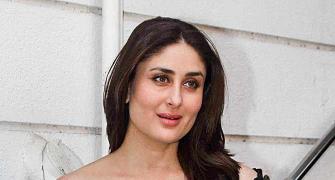 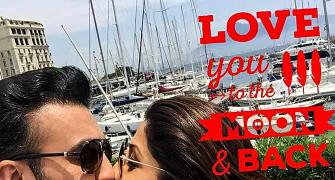 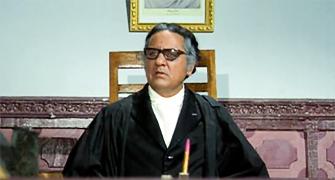 Do you recognise these filmi judges? 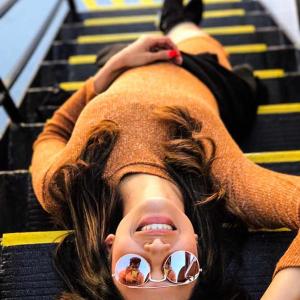