News
Business
Movies
Sports
Cricket
Get Ahead
Money Tips
Shopping
Sign in  |  Create a Rediffmail account
Rediff.com  » Movies » 'The cocaine was not mine'

'The cocaine was not mine'

Lindsay Lohan has denied taking drugs and has also claimed that the cocaine found by cops actually belonged to someone else.

The actress was arrested in Santa Monica on July 24 for DUI (driving under the influence) and cocaine possession and her lawyer claimed that she had a relapse before the incident.

'I am innocent; did not do drugs. They're not mine. I was almost hit by my assistant Tarin's mom. I appreciate everyone giving me my privacy,' the Sun quoted her, as writing to Hollywood Access.

According to her assistant's mother, she was chased by Lohan in her car.

The cops also spotted the 21-year-old arguing with the woman and she fled the spot as soon as she saw the police. She was later caught and handcuffed.

The Mean Girls star is already facing a DUI charge in Beverly Hills, following which she checked into rehab for the second time. After checking out of rehab a few weeks ago, Lohan wore alcohol tags to monitor liquor consumption levels. 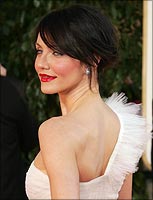 The 34-year-old revealed that she owns shoes in every shape and colour available.

'I own shoes in every shape and colour available -- pointy toe, round toe, open toe, high heel, low heel -- I've got them all,' Contactmusic quoted Diaz, as saying.

Diaz also revealed her obsession with 1981 movie, Raiders of the Lost Ark as a kid. The actress was so fascinated by the Indiana Jones film that she never missed watching it even a single day.

'When I was younger, I used to watch it every day, and sometimes even twice a day. That was how I thought people lived their lives -- travelling and having adventures,' she said.

Paris goes green to save the environment

In another attempt to change her image, socialite Paris Hilton is going green to save the environment.

The hotel heiress is planning to replace her gas-guzzling Range Rover SUV with a Ford hybrid, after the car manufacturers gave her an eco-friendly vehicle as a gift.

'I'm getting a car from Ford, a hybrid one. They gave me one. So I think driving hybrid cars is the new way to go, and recycling,' Contactmusic quoted her, as saying.

The Simple Life star, who recently spent 23 days in jail for driving with a suspended licence, is also considering using her MySpace page to persuade fans to go green.

'On my MySpace, I'm going to start writing about ways kids can help save the world, because anyone can do it, no matter how old you are or where you're from. I just want this world to be a better place for my grandchildren,' she said. 'I'm scared with what's going on in the environment, so I hope people will help and make a difference. Everyone can.'

Cruise's cinema plans have Colorado neighbours up in arms

Tom Cruise is being criticised by his neighbours over plans to rent out a local cinema for his own use.

The Mission Impossible actor, who owns a mansion in Telluride, revealed that he wanted to rent the theatre for $1000. The 45-year-old was looking forward to enjoy the cinema experience with wife Katie Holmes and daughter Suri at his own leisure.

However, this has locals up in arms, reveals a source.

'It's the only cinema in town. It's particularly crazy as he can get hold of any film he likes and watch it at home,' Contactmusic quoted the source, as telling the Daily Mail. 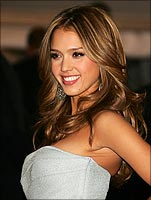 It's splitsville for Jessica Alba and beau Cash Warren

Men can start wooing Jessica Alba again, as she is back on the sexy singles' list after breaking up with beau Cash Warren.

Sources reveal to Usmagazine.com that the couple, who had been together for two-and-a-half years, were definitely not together any more. Insiders also disclose that it was Alba, who made the decision to cut Warren out of her life, and told him so over the phone on July 22.

It seems that after informing Cash, Alba sent an assistant to the LA home the two shared to pack up Warren's belongings and move him out.

While a rep for Alba refused to comment on the break-up, a source revealed that Warren was not only 'devastated,' but also thinking that the presence of another man in his ladylove's life was the reason why she ended the relationship.

'(It) happened... almost out of nowhere. [Cash] thinks it's for another guy but doesn't know. He's totally devastated. But it was all her,' the magazine's website quoted the source, as saying.

Warren and Alba met on the set of Fantastic Four in 2005, when he was the assistant to the film's director, Tim Story.

You won't be seeing Hollywood stars light up on-screen anymore -- at least in all of Disney's future family-oriented films.

The news that the media giant was banning smoking scenes in its movies comes straight from Disney's chief executive Robert A Iger.

Iger said that such scenes will be 'non-existent' in films under the Disney brand. He also revealed that smoking will be 'discouraged' in movies aimed at an adult audience that are released under its Touchstone and Miramax banners.

Iger made Disney's decision known in a letter to American congressman Edward Markey, who called the pronouncement 'groundbreaking,' and an 'important commitment.'

'I am pleased that Disney is embracing a policy that is consistent with the long-term public health of the nation. Now it's time for other media companies to similarly kick the habit and follow Disney's lead,' the BBC quoted Markey, as saying.

Martin Dockrell, a spokesman for UK anti-smoking group Ash, commended the move and hoped that it would have a 'domino effect' on other studios as well.

'(It's) a really important first step. We hope it's the beginning of a domino effect as other studios come into line,' he said.

Iger also let it be known that DVDs that show cigarettes will now carry anti-smoking announcements.