Adventure and intrigue in Golden Compass

It is not impossible to enjoy The Golden Compass, a flop in America but a hit across Europe and South America. But to enjoy the film and some of its fine performances and spectacular scenery, see it in a good theatre. And more importantly, don't go expecting a Lord Of The Rings. And forget the critic who have drubbed it The Golden Compost.

The film, which has adventure and intrigue, has grossed a healthy $250 million outside America, and continues to make money. Golden Compass could also mint a fortune when the DVD version is out in a few months. In America, though, the film had a lukewarm reception and is struggling to reach $75 million.

And don't get worried over the Catholic church's contention that the film is preaching godlessness. In fact, the gorgeous looking film, based on Philip Pullman's best-selling and award-winning first novel in the His Dark Materials trilogy is a triumph for humanism. It celebrates many virtues including friendship between animals and humans, and celebrates a young and spunky heroine.

The film would have been far better if the script had been tighter. Eye-poppingly gorgeous, heartwarming in many places and well acted, the film does not have repeat viewing values because it does not capture the spirit of Pullman's novel. You would enjoy it more if you haven't read the book. 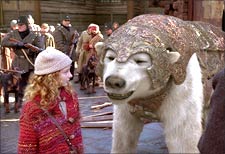 Some of the disappointment over the film also comes from the huge expectations it had set.

As a reporter for the British Broadcasting Corporation rightly said 'not since Harry Potter, Lord of the Rings and the Chronicles of Narnia has one fantasy film created so much internet buzz.'

Besides, the film cost $180 million, making it one of the most expensive films of all times. At one time, Anand Tucker, son of a Gujarati father (who anglicised his original name Thakkar) and a German mother, was to direct it. But he was sacked over a budget dispute. The film is adapted and directed by Oscar nominee Chris Weitz (About A Boy) who had never made as film costing over $60 million.

The film boasts of an impressive cast including Nicole Kidman (who is terrific) and Daniel Craig (dashingly handsome), the new James Bond.

Those who are seeing the English version will be delighted to hear the voices of Oscar nominee Ian McKellen (Gods and Monsters, The Lord of the Rings trilogy), Oscar winner Kathy Bates (Misery, Titanic), Oscar nominee Kristin Scott Thomas (The English Patient), and Freddie Highmore (Charlie and the Chocolate Factory).

The film, like the novel, takes the audiences into a universe where witches rule the northern skies, where ice bears are the most courageous warriors, and where every human is joined with an animal spirit who is as close to them as their own heart. It also takes the viewers into the world of The Magisterium, which seeks to control humanity and is worried over the last remaining Golden Compass and the child destined to possess it.

So we get to meet 12 year-old Lyra Belacqua (newcomer Dakota Blue Richards, who is endearing), who tears through the streets in search of adventures with her loyal friend Roger (Ben Walker). Lyra is accompanied everywhere by her daemon, Pantalaimon (voiced by Freddie Highmore). The small, ever-changing animal serves as a continual voice of reason.

Meanwhile, her uncle, Lord Asriel (Daniel Craig), is embarking on a trip to the Arctic Circle to investigate a mysterious element called Dust. He is not aware that the Magisterium is dying to stop him.

Just around this time there are rumours of children being abducted to the frozen north and Roger goes missing. Lyra swears she would face any obstacle to bring him back. When a new figure Marisa Coulter (Nicole Kidman), a scientist and world traveler appears at the college, Lyra sees her best chance to get away. But soon she discovers the real nature of Mrs Coulter.

Lyra decides to break away from Mrs Coulter, and continue the journey on her own. She meets a tribe of seafaring Gyptians led by Lord Faa, Ma Costa and Farder Coram (the veteran Tom Courtenay). She travels over sky and ocean and to the wilds of the icy north where she gains a powerful ally in a great armored bear named Iorek Byrnison (voiced by Ian McKellen). Iorek pledges to make her victorious.

In the great war that is looming, Lyra knows that her task will be formidable despite the possession of the Golden Compass and the support of her friends and allies.

Forget the hype, forget the book which inspired it, forget the critics. Just have a good time watching the film.